The March 8th Jersey City City Council meeting was one of the most "festive" in recent memory as over 20 Jersey Cityans came to the meeting to throw a party in honor of the 70th PILOT of Steve Fulop's term.  (see this for a video story)

The party featured hats, balloons, brightly painted signs that said "Builders:70, Children:0," and even an "Abatement Cake of Shame." Along with the mock giddiness, there was a real message: Steve Fulop was ripping off the school system.

In response to protest, Jersey City's City Council members made several defenses of their pro-abatement policy, such as that development would not occur in the poorer sections of Jersey City without abatements and that the abatements were usually only for five years only.

I don't necessarily disagree with those arguments, but Councilwoman (and Fulop ally) Candice Osborne made an argument that Jersey City actually came out ahead in tax abatement deals. Osborne even said she had a "mathematical model" to prove it.  (See 2:49:30)

When it comes to the funding for schools. I have gone though the numbers multiple times and I've said this many times...The math to me makes sense for both the people getting the abatement as well as traditional taxpayers - because of the state aid.

I have a model. I would love for someone to tell me I'm wrong. Point out where I'm wrong. When I look at it, it makes sense for us to give the abatements. Financially. 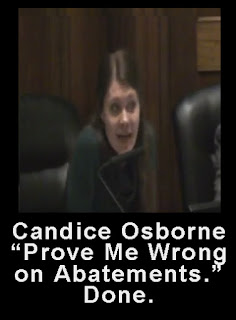 Though Osborne never got around to explaining her "mathematical model" at that meeting, on other occasions she and other Jersey City politicians have made the argument that PILOTs are a net-positive for Jersey City, so I know what the argument is supposed to be.  The argument is that 95% share of the PILOT fee for municipality means that municipality would have more money than it would through through normal taxation, even though the PILOT fee is less than normal taxes would be.

But this is such an incomplete look at Jersey City's taxation that it's wrong because Jersey Cityans have to make up for all of the lost school and 36% of the lost county taxes.

Unless the abatement fee exceeds 86.1% of what a development would pay under regular taxation or the abatement truly is a "but for" component of financing for the development, Jersey City's taxpayers are net losers in any abatement deal, even under the state aid status quo.  (the math is below)

Based on what other Jersey City politicians have said, this is what Osborne's argument probably is.

In Jersey City under normal taxation, the municipality gets 49.1% of the money, the school board gets 25.8%, and Hudson County gets 25.1%.

Under (long-term) PILOT fees, however, the municipality gets 95% of revenue, the school board gets 0%, and Hudson County gets 5%.

Since the municipality gets such a higher percentage of PILOT fees than regular taxes, it's possible to structure a PILOT deal so that the municipality alone comes out with more money than it would otherwise have.

(Jersey City's county taxes would also be offset slightly by the 5% to the county, but I have not considered that here.)

But municipal taxes aren't the only taxes that Jersey City taxpayers pay.

Like everyone else, they pay school taxes and county taxes.

And since the school district and Hudson County get so much less money than they would under normal taxation, other Jersey City taxpayers have to take up the slack.

The direct and clearer loss to Jersey City taxpayers is through the complete loss of school taxes, but, as we will see, there is also a substantial loss of County taxes that Jersey Cityans have to make up for.

78.9% of regular taxes is much higher than Jersey City's average PILOT arrangement, and even this raw calculation excludes the impact of the new residents, students, or workers at the PILOTed property.  I assume the marginal costs to the municipal government are low, but the costs aren't zero either. I don't know how many K-12 kids would be in a residential PILOTed building, but likewise, it isn't zero.

SECOND, even that 78.9% amount excludes the loss of Hudson County taxes, for which other Jersey City taxpayers have to make up 36% of the losses.

This is a more complex assessment, but what Osborne is ignoring is that Jersey City taxpayers pay 36% of Hudson County taxes (based on JC's having $25.7 billion in Equalized Valuation against $71.4 billion for all of Hudson County).

In other words, for every $1 million in taxes that Hudson County loses to PILOTing, Jersey Cityans themselves would make up for $360,000 of that loss.

The Jersey City City Council evidently thinks that ripping off Hudson County is good for it because instead of sending 25.1% of tax revenue to Hudson County it only has to send 5% of PILOT revenue, but  36% of the 20.1% of lost county taxes is paid for by Jersey City anyway.

So, of this amount, Jersey City taxpayers would directly get $3,745,000 offset from their school and municipal taxes.

So even at 85% of regular taxation and neglecting the costs of new residents/workers/students, Jersey City loses.

Jersey City Thinks that Since Hudson County is Hurt More than Jersey City, that Jersey City Isn't Hurting Itself Too

Right now Jersey City's PILOTs are (estimated) 14% of Hudson County's official Equalized Valuation ($11.6 billion out of the $71.4 billion total), so every Jersey City taxpayer's county taxes are 14% higher than they would otherwise be due to so much Jersey City property being PILOTed.)

Does Osborne consider this?  14% is not a trivial increase.  It means $50 million in higher county taxes for everyone in Hudson County, a significant share of which comes from Jersey City itself. 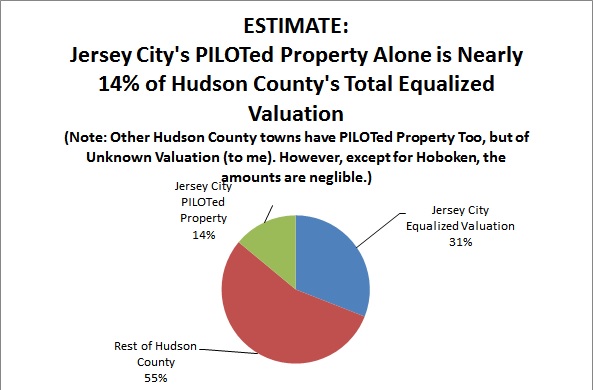 The Exceptions to PILOTs Hurting Taxpayers

The only time I think a PILOT would be a real fiscal benefit to a town is if the abatement is a truly a "but-for" component of financing. If a development honestly wouldn't get built without the tax abatement, then the PILOT deal would be a net positive, since the PILOT fee of the new, larger building would likely exceed the taxes paid by the existing, smaller building.

HOWEVER, even this "but-for" argument is time-sensitive. Perhaps a development project wouldn't "pencil" now, but perhaps it would in five years? Journal Square might have been economically marginal for developers a few years ago, but is it now? I think not.  Although a but-for PILOTed development might accelerate growth, it's possible that that growth would arrive without abatements if the neighborhood had a few years.

Also, there might be non-quantifiable benefits in granting a PILOT if it enables some kind of historical preservation, superior architectural quality, or other services from the developer.

So, unless the abatement truly is a but-for factor, or if the building is an architectural treasure, Jersey City's PILOT addiction causes other Jersey City taxpayers to pay higher taxes than they would otherwise or not get any positive externality either.

The Spectre of State Aid Redistribution

HOWEVER, the above calculations don't factor in state aid and fact that even if Adjustment Aid is preserved, Jersey City will not gain any state aid for decades and therefore have to pay for an increasing share of its school budget through local taxation.

The Jersey City Public Schools have a Total Operating Budget is $570 million (for K12).

Since education inflation is 2-3% a year, the school budget should increase by $11-$17 million per year to avoid cuts.

Also, there is the likelihood that Jersey City will lose its Adjustment Aid.

In the scenario of lost Adjustment Aid, Jersey City's City Council might support PILOTing because they think that a PILOTed property is "invisible" to the formula for Equalization Aid, but this is only half right.

So, let's say that a PILOTed luxury residential building has 1,000 adults living there. Can you make a guess what  Aggregate Income would be? It could be $100 million.

Right now Jersey City gets about 150% of its recommended SFRA funding, but if the state started to give Jersey City only 100% of funding, it would lose state aid every time it PILOTs a building. The loss of state aid would not be as great as the loss would be if the project were unPILOTed, but at least an unPILOTed building would pay school taxes and a PILOTed building right now pays $0.

Candice Osborne evidently believes that Jersey City's state aid will never be redistributed, despite its undeniable increase in wealth.  Given gubernatorial frontrunner Phil Murphy's refusal to even mention Adjustment Aid, she might be correct, although also on March 8th Osborne and the whole Jersey City City Council unanimously voted to spend $75,000 to hire a law firm to defend Adjustment Aid, something they never thought necessary before.

And awareness of the savage inequalities of New Jersey's aid distribution has never been higher.  At the same time that Jersey City was odiously hiring a law firm to keep its Adjustment Aid, students in Clifton were demanding state aid justice.  Kingsway Regional's lawsuit to have Adjustment Aid declared unconstitutional also continues.

Jersey City's Board of Ed Must Raise Taxes Too

I have respect for the tax abatement protesters at last night's meeting, but technically, tax abatements hurt the taxpayers, not the school system.

This is because a Board of Education sets a tax levy, not a tax rate, and whatever tax levy it sets it automatically gets.

So if Jersey City never PILOTed anything it wouldn't mean that the Board of Ed had a cent of additional money unless the Board of Ed made the decision to increase taxes beyond 2% a year, which it hasn't done, despite the gigantic increase in Jersey City's non-PILOTed tax base.

If none of Jersey City's development was PILOTed, what would happen is that everyone else's taxes would be offset.  Non-PILOTed development anywhere doesn't automatically have any fiscal benefit to the schools.

So I'm glad to hear about the protest at the City Council meeting, but for the school system to have more money, people have to protest at the Board of Ed too and demand a higher tax levy.

Posted by StateAidGuy at 6:51 PM