Note, this was written before Coronavirus. It was accurate back in February, but the parts about aid gains are inaccurate now because the $336 million in new revenue was cancelled.
Updated state aid disparities are here.  The 2020-21 deficit for underaided districts will be $1.9 billion.
2020-21's state aid distribution is the fourth year of New Jersey's attempt to bring equality to NJ's K-12 state aid through the combination of increasing the overall state aid package and redistributing Adjustment Aid from overaided districts to underaided districts, with Phil Murphy's proposed $491 million increase the largest increase NJ's schools have gotten since the 2011-12 Great Recession rebound year, but with the new aid focused on NJ's most severely underaided districts.

I admit that back in the 2016-2017 gubernatorial campaign, I had doubts about Phil Murphy's commitment to state aid equality, but the 2020-21 budget, which cuts Adjustment Aid by $155 million, puts those doubts to rest.

Starting with Chris Christie's final budget in 2017-18 and including 2020-21, New Jersey has now redistributed $307 million in Adjustment Aid.  The combination of that $307 million plus $1.3 billion in new state aid has dramatically reduced the number of districts who are severely underaided, from 50 districts with deficits over $4,000 a student in 2016-17, to only fifteen in 2020-21. 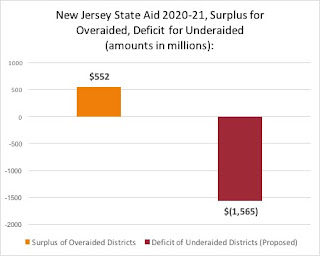 Despite the $491 million proposed infusion of aid into the underaided districts, their deficit only shrank by $220 million, from $1.78 billion in 2019-20 to $1.56 billion for 2020-21, due to the dynamic nature of district needs and the constant increase of Adequacy Budgets. 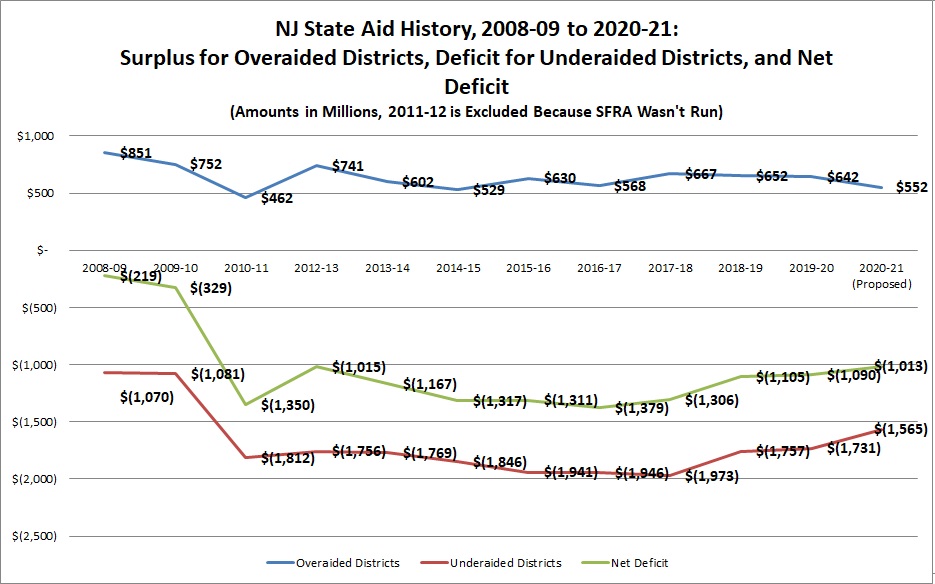 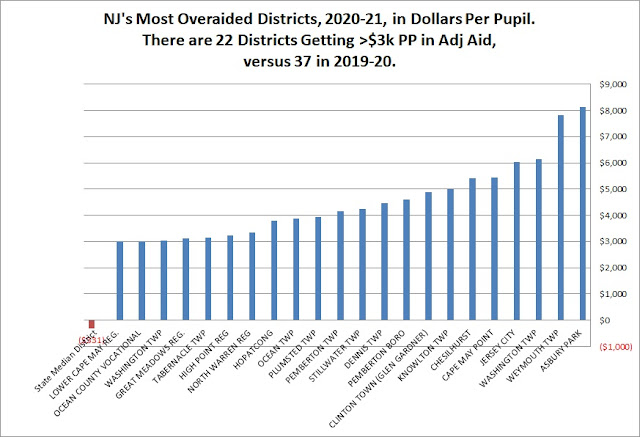 Weymouth Township in Atlantic County will get 527% of its recommended state aid, or $1,319,479 when SFRA says it only needs $309,300, making it the most overaided in percentage terms of operating districts.

Asbury Park has long been ridiculously overfunded and overaided.  The fact that Asbury Park was literally America's highest-spending district among K-12s with more than 500 students and was academically in NJ's bottom 5%, is one of several pieces of evidence that the premise of Abbottism where exceptionally high-spending can be transformative is wrong.

Some Democrats acknowledge that excessive spending has failed in Asbury Park, but Asbury Park became the Republican poster child for Abbott waste, and the favorite Republican talking point to argue that NJ needed to change state aid. 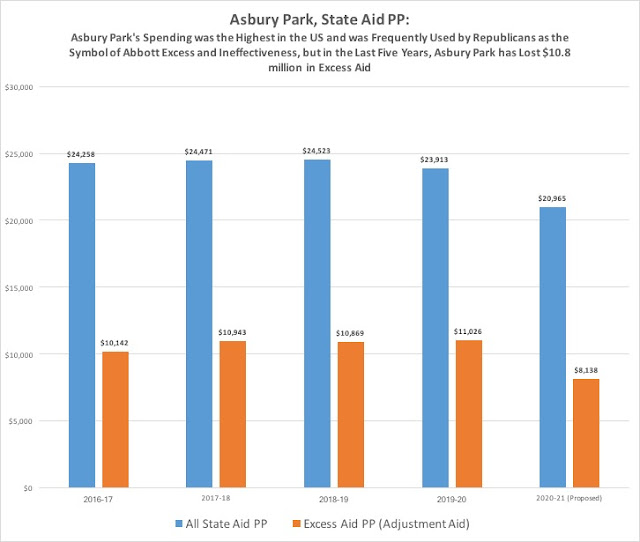 Yet, since S2 is lowering Asbury Park's state aid, it's disappointing to see Republicans condemn all of the $155 million in Adjustment Aid redistribution, without any attempt to have a nuanced view.

EG, Assemblyman Brian Bergen provides an example of this anti-conservativism.  Although most districts in Bergen's District 25 are gaining state aid, Bergen condemns all redistribution

“Only 64 percent of schools are getting increases, the rest will remain flat or continue to lose millions as part of a failed school funding formula that is hurting districts across the state,” said Bergen (R-Morris). “Among the towns I represent, there are five school districts facing a cut of more than $3.7 million and this is on top of what they lost last year.”

If Republicans are supposed to be the defenders of state taxpayers, why are they implicitly condemning redistribution which saves state taxpayers tens of millions a year, including normalizing education spending in NJ's most inefficient district?

Pemberton made state headlines this March because it was the subject of an error by the Department of Education where the DOE used 2018 data on a district's total tax rate and therefore missed that Pemberton now had an above-average tax rate and had therefore reached S2's exemption from Adjustment Aid cuts for Abbott SDA districts.

Although much was made of the DOE's error and it made New Jersey give an an additional $2.2 million to Pemberton (so Pemberton's state aid surplus is $4,152 per student), the real mistakes are:

Regarding the last point, S2 created difference standards to protect Adjustment Aid for Abbotts and non-Abbotts.

This is the Abbott threshold for Adjustment Aid preservation that applies to Pemberton, even though Pemberton doesn't meet the NJ Supreme Court's Abbott standard anyway.


(2) An SDA district that is located in a municipality in which the equalized total tax rate is greater than the Statewide average equalized total tax rate for the most recent available calendar year and is spending above adequacy as calculated pursuant to section 1 of P.L.2018, c.67 (C.18A:7F-70) shall be subject to a reduction not to exceed the amount by which the district is spending above adequacy multiplied by the corresponding percentage included in subsection b. of this section


And this is the threshold for Adjustment Aid preservation in non-Abbotts.

Moreover, Pemberton's taxes are only trivially above New Jersey's average, so there is no "municipal overburden" issue.

Pemberton Township has a 2.293 tax rate and Pemberton Borough has a 1.909 tax rate, and residents of both towns get "free" PreK for their kids.

So multiple articles and tweets were published after the Department of Education made a mistake with Pemberton's state aid, but Abbottist jurisprudence and S2 are where the substantive mistakes lie.

Powered by its surging tax base, income, and upward tweaks to the Local Fair Share formula, Jersey
City's Local Fair Share grew from $474 million to $522 million (+10%) which is $16,960 per student, which is the same as districts often considered "wealthy," such as South Orange-Maplewood, Freehold Township, Glen Rock, Sparta, Parsippany, and Metuchen.

Jersey City, unlike the suburban districts above, has poorer students, so it does get Equalization Aid ($91.4 million for 2020-21), but its tax base is growing so quickly that in only two years it will be ineligible for Equalization Aid and that Equalization Aid will become Adjustment Aid that is then eliminated.

Note: although Jersey City's state aid has been cut by $86 million in the past four years, its tax base growth has been more rapid than its Adjustment Aid cuts, hence, it has become more overaided, not less.

The steady rebound of Adjustment Aid despite four years of losses

This is because S2 bases the cut on Adjustment Aid on the "state aid differential" for the upcoming school year, 2020-21.  When the DOE calculated state aid for 2020-21, they must have originally had overaided districts with a $707 million surplus, and then reduced that by 23%, in accordance with the stipulations of S2.

Note, although the surplus is $551.6 million, not all of that is subject to redistribution, due to provisions in S2 that protect vo-techs and Abbotts (like Pemberton) and non-Abbotts with higher-than-average taxes.

The districts with the largest deficits in dollars per student in 2020-21 are:

For some of the above districts, the deficits remain large due to some combination of steady (weighted) enrollment growth combined with income loss or tax base erosion.

But to focus on the good news, the districts who were the most severely underaided in 2016-17 have made steady gains, with the important exception of Atlantic City.

Posted by StateAidGuy at 12:40 PM No comments: