One important consequence of New Jersey's 21st Century budget travails is the severe neglect and outright cuts of the state's municipal aid, other local aid, and direct tax rebate payments.

Although we hear often about the underfunding of public education in the
Christie era (including on this blog!), it is the OTHER ITEMS paid for by NJ "Property Tax Relief Fund," from municipal aid to direct tax rebates to library funding to community colleges, that have been much more neglected and gutted.

New Jersey's peak year for Municipal Aid was also FY2008, when it was $2 billion.  Municipal aid sank to a nadir of $1.3 billion in FY2011 and in FY2018 it was only $1.524 billion.  For FY2019 although Phil Murphy and the legislature increased PreK by over $50 million, increased K-12 opex aid by $350 million, they only increased municipal aid by $12 million, all of which was earmarked as Transitional Aid. 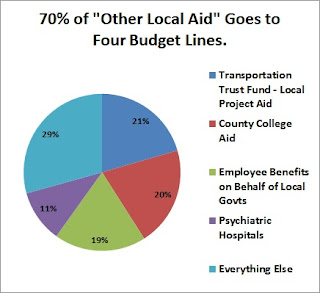 Aid."  Other Local Aid consists of a basket of programs including libraries, reimbursements for sundry administrative expenses, and county-specific spending that might be considered pork barrel.  This category of aid has increased over the years, but at a sub-inflation rate and most of the increase has gone to a category called "Employee Benefits on Behalf of Local Governments. 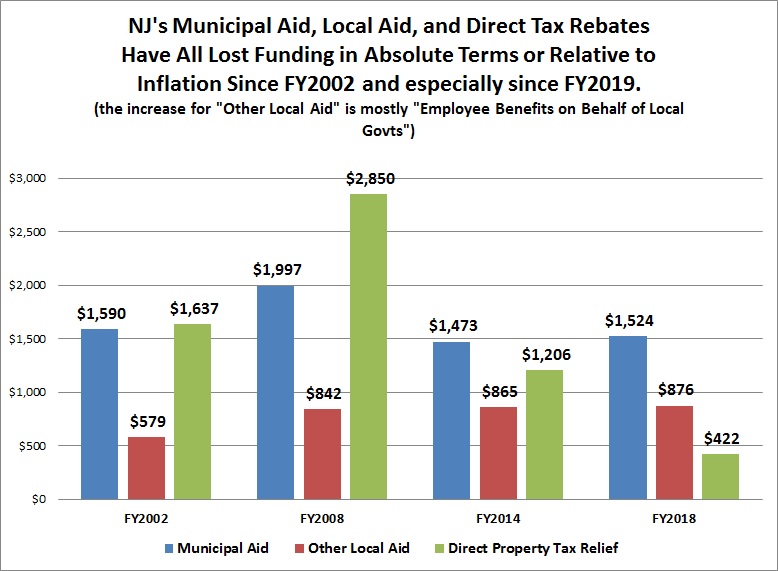 Over the 21st century timeframe, the state's education spending has increased more rapidly than other items funded by the "Property Tax Relief Fund" and the entire state budget. 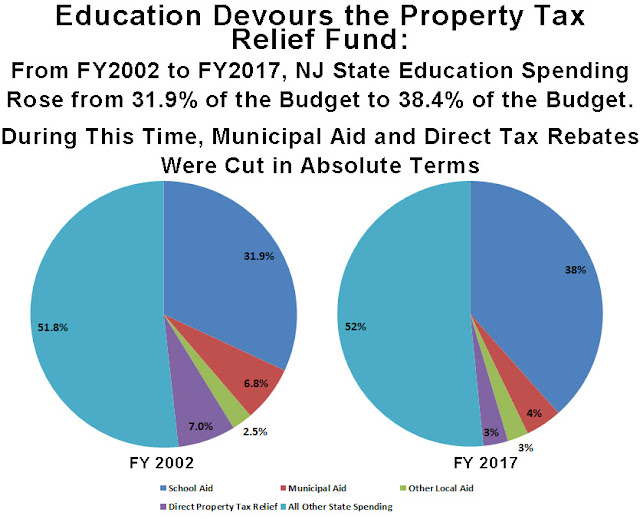 Of course, the increase in K-12 opex aid has been more modest, but the large increases for the Teachers Pension and Annuity Fund, school construction debt servicing, Whitman-era Pension Obligation Bonds, teachers Post-Retirement Medical, teachers Social Security, and PreK are still real money intended to support education, and that money comes out of the state's income tax revenues.

Municipal Aid is Not Distributed Justly

I don't understand all the formulas and sub-formulas of municipal aid, but a glance at the amounts of aid that different towns are getting shows that the amounts do not make sense based on population or the principle that state aid should compensate for a town having a low tax base.

Municipal and County Budgets will Come Under Pressure

The neglect of municipal aid is not sustainable for obvious reasons in that their budgets are growing, but also because municipal and county budgets will come under increasing pressure due to the following measures.

The fact that New Jersey has flat-funded orgutted Municipal Aid, Other Local Aid, and Direct Tax Rebate is another reason why NEW JERSEY MUST REDISTRIBUTE ADJUSTMENT AID, since any attempt to fully fund all NJ school districts just with new revenue would necessarily cause continued flat-funding and negative funding for other vitally important state obligations.

Posted by StateAidGuy at 6:50 PM No comments: