Is SFRA Fair to South Jersey and Rural New Jersey? 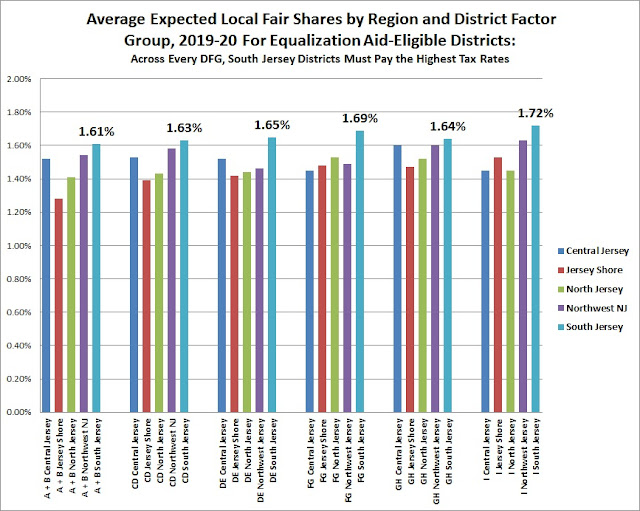 One chronic political dynamic in New Jersey is the friction between South Jersey and the rest of New Jersey, where South Jersey persistently feels that it is disrespected by North Jersey and disadvantaged in lawmaking and budgeting, ie, it is the "Rodney Dangerfield" of the State.

There's some credible research to back this claim up:


“There has long been a popular belief among South Jersey residents that the region gets the short end of the stick when it comes to the allocation of public goods in the state,” explains Walter Rand Institute Faculty Fellow Shauna Shames, an assistant professor of political science at Rutgers–Camden. “We found that this difference in resource allocation does in fact exist and is not explained by the lower population or incomes of residents of South Jersey counties.”

Shames, who co-authored the study, “Is South Jersey Getting Its ‘Fair Share’ of Public Goods?,” with Spencer Clayton, a Rutgers–Camden Ph.D. student in public affairs, detailed data-supported answers to the question that has challenged South Jersey residents for decades, in a special presentation today on the Rutgers–Camden campus.

According to the Rutgers–Camden researchers, previous studies show that South Jersey is a distinctive region from North and Central Jersey in terms of identity and socioeconomic indicators. South Jersey residents lags behind its northern and central neighbors statistically in terms of public-health factors, such as obesity and teen birth rates; economic issues, such as unemployment and college education attainment levels; and geographic factors, such as rural versus urban areas. On average, South Jersey residents also have lower incomes and are more likely to be living in poverty and receiving government assistance.


I can't speak to transportation spending, municipal aid, college spending, or hospital beds, but as an obsessive New Jersey state aid researcher, I agree that SFRA does have an unjustified tilt against South Jersey.

The bias comes from how SFRA uses Aggregate Income to calculate Local Fair Share, which disadvantages several categories of school districts, but especially places where people happen to live in more affordable real estate, and that is much more true of South Jersey than North Jersey. SFRA's method of calculating Local Fair Share combined with SFRA's new Geographic Cost Adjustments means that even if every district received 100% of its recommended state aid under SFRA, South Jersey districts and rural districts everywhere would have to pay higher tax rates than their North Jersey and suburban or urban equivalents.

This is the second blog post I've written about the problems of New Jersey's bizarre Local Fair Share sub-formula. My previous post, "The Highs and Lows of Local Fair Share" examined how other categories of school districts are also hurt by Local Fair Share's use of Aggregate Income:

This post will examine the history of New Jersey's Local Fair Share formula and show that it was intentionally written in 1990 to give less money to South Jersey, and then copied & pasted into CEIFA and SFRA.   This post will show how the writers of SFRA in 2007-08 ignored CEIFA's existing disadvantage for South Jersey and made it even worse by writing explicit Geographic Cost Adjustments that would further reduce the amount of state aid going to South Jersey and rural districts. 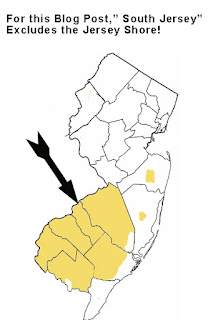 The problem might really be conceptualized on a West Jersey/East Jersey axis, but since the terms "West Jersey" and "East Jersey" don't exist, I've used "South Jersey."

The core state aid formula in SFRA is that for Equalization Aid, which attempts to "equalize" budgetary capacity between wealthy and poor districts.

The Equalization Aid formula is:

To give an example of why it is appropriate to exclude districts that are ineligble for Equalization Aid, consider Millburn.

Most districts that are ineligible for Equalization Aid are not as rich as Millburn.  A decent number of districts that are ineligible for Equalization Aid do exceed their Local Fair Shares (eg, Rockaway, Flemington-Raritan, Wayne, Fredon, Blairstown, Lower Alloway's Creek, Freehold Township, South Orange-Maplewood etc) but I have chosen to exclude them because SFRA sees them as "rich districts" and their high taxes are due to 1) underaiding by the state and/or 2) a voluntary desire to have higher spending.

Both Adequacy Budget and Local Fair Share have their own sub-formulas and both of those sub-formulas present issues for South Jersey and rural northwestern New Jersey.

The Local Fair Share formula is tweaked (upwards) annually, but for 2019-20 the formula is:

The statewide math works out to a 1.5% average, but because SFRA uses Aggregate Income to calculate Local Fair Share, Local Fair Share varies from a 0.7% tax rate for some Cape May districts that are dominated by vacation homes all the up to 2.1% for Lindenwold and Hi Nella in Camden County.  This means that New Jersey considers it "fair" for some districts to pay triple what other districts pay.

New Jersey is, along with Connecticut, Massachusetts, Maryland, New York, Virginia, Pennsylvania, New Jersey one of only six states to use a district's income to calculate Local Fair Share.  Other states base local share on property values, sometimes combined with miscellaneous taxes like sales taxes and car taxes.

New York State and Massachusetts are the only states to weigh Aggregate Income and property values equally, like New Jersey.   Virginia's weighting is similar, although technically it is 50% property values, 40% aggregate income, and 10% sales taxes.

Answer: because SFRA's predecessors did, going back to Jim Florio's Quality Education Act of 1990.

So why did the Quality Education Act use income?

Answer: To Give Less Money to South Jersey:

According to Deborah Yaffe's book about the Abbott cases "Other People's Children," the decision to use income as a basis for a district's local tax capacity was intentionally made to give less money to South Jersey because South Jersey was more affordable.


"[Florio] team members considered how best to assess each district's wealth, which would in turn decide how much of the foundation amount local property taxes would cover. Using property values as the sole gauge of district wealth, it turned out, skewed [sic] state aid toward the low-cost towns of South Jersey and away from the big, impoverished northern cities. One night, Florio's team huddled around a tiny globe, trying to determine which line of latitude passed through central New Jersey; perhaps using a different wealth formula on either side of the line would skirt the South Jersey problem. Instead, the team found another solution: a district's local tax contribution, they decided, would turn not only on its property values but also on its residents' average [sic] income."

Florio's team knew what they were doing and the use of Aggregate Income indeed does prevent a "skew" of state aid towards low-cost towns of South Jersey (although it hurts plenty of "impoverished northern cities" and rural towns too.)

Given that the non-Shore counties of South Jersey are more affordable and people spend less income on real estate, SFRA does require them to pay higher tax rates.

No matter how you parse it, South Jersey districts are expected to pay higher tax rates than districts elsewhere.

Another way to look at how Local Fair Share creates an unequal tax landscape is how many districts are expected to pay above-median and top-fifth tax rates.

Of the districts who have Local Fair Shares at or over a 1.5% tax rate, 33 are in Camden County, 21 are in Gloucester County, 11 are in Cumberland, 9 are in Salem, 24 are in Burlington.

The counties are ranked by the percentage of Equalization Aid-eligible districts that have LFSs over 1.5%.

Of the districts who have extreme Local Fair Shares at or over 1.7%, 23 are in Camden
County, 13 are in Gloucester, two are in Cumberland, two are in Salem County, and five are in Burlington.

Although Lindenwold has NJ's highest Local Fair Share at 2.1% ($12.5 million on an Equalized Valuation of $599 million), since Lindenwold's Local Fair Share is still very low in dollars-per-student, it is with Woodbury Heights losing $531,550 for its 220 students, or $2507 per student.

Jim Florio's administration wrote the Local Fair Share formula to give less state aid to South Jersey and more state aid to cities in North Jersey, but that was the only thing they did to adapt to New Jersey's regional cost reality.

The sub-formula for a district's Adequacy Budget is:

So having a GCA higher than one increases Equalization Aid (if eligible) or reduces it.

Since 2014, the Geographic Cost Adjustments have been:

So, as you can see, all South Jersey counties have multipliers below 1.0, meaning their Adequacy Budgets and Equalization Aid (if eligible) are reduced.

Woodbine, in Cape May, loses the most money as a result of the GCAs.  If the GCAs didn't exist, Woodbine would get another $1102 per student in Equalization Aid.

“Our school district costs are roughly equal to or more than school districts throughout the state, yet the School Funding Reform Act (SFRA) of 2008 adopted by the Corzine Administration penalizes us for a bogus assumption that it is significantly cheaper to educate a child in rural areas,” Oroho said. “As a result, our residents are faced with making up the cost differential via local property taxes. ZIP codes should not factor in the cost or quality of education in this state.”

Oroho detailed several examples of why the geographic aid adjustment is not fair to rural school districts, including: Special education costs and out-of-district placement costs are not dissimilar for all counties; state health benefits must be accounted for; the costs of energy, textbooks, supplies and food service are the same or similar across counties; and transportation costs are exponentially more expensive than for suburban/urban school districts.

“The expectation that it is less expensive to operate a school district in rural communities is a farce, as approximately 90 percent of our budgets are comprised of steady expenses,” Oroho noted. “Just as children should not be penalized if they live in a failing school district, students should not suffer from a reduction in state aid because of a nonsensical geographic stipulation in a flawed school funding formula.”

It was partly due to Steve Oroho's effort that the GCAs were made less-unfavorable to rural New Jersey in 2014.  Oroho has now joined forces with Sen. Bob Andrzejczak to reset every county's GCA to at least 1.0%.

Does Having a Lower Cost of Living Justify Higher School Taxes?

Again, there is some necessity to recognizing that costs vary by region, hence something like the Geographic Cost Adjustments is appropriate.

In a future post I will examine how another problem of Local Fair Share calculation is that there is a correlation between having a high Local Fair Share and having high municipal taxes too. 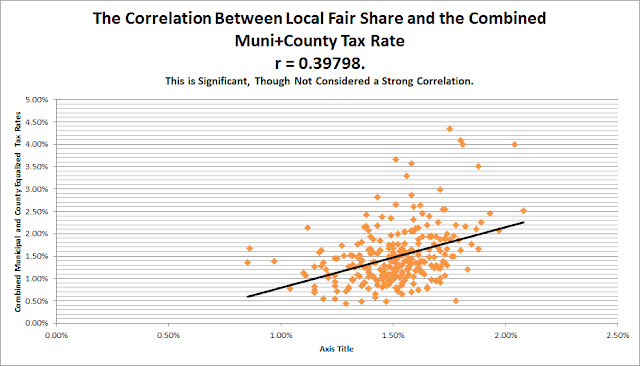