When I first started to notice how unfairly distributed New Jersey's K-12 school aid was distributed back in 2012 I had a huge amount of difficulty finding anyone who could explain to me how school aid was supposed to work and why there were so many poorer, larger districts who got less money than wealthier, smaller districts.  Like, why did Bloomfield get less money per student than Hillsborough?  Why did South Orange-Maplewood get nowhere near as much as Montclair?  Why did Randolph get four times as much per student as West Orange?

I wrote my first blog post for this blog in 2014 (about the Interdistrict Choice program's problems).  From what I know now in 2020, I don't think my posts from my first few years were that knowledgeable.  I didn't learn I could OPRA "Uncapped Aid" until 2016.

My early posts weren't anything written by an expert but they were right in one essential respect: There Was No Formula Being Used.  The only thing that determined how much aid a NJ district got was the amount it got the year before.

I admit now that I am not very knowledgeable about Municipal Formula Aid.  I don't know a lot about how the municipal formula is supposed to work.  I don't know how much money various municipalities would get if Municipal Aid were "fully funded."  Like with school aid back in 2012-2015, I've tried to talk with experts and none of them have had an answer.

But I am sure of one thing:

There is No Formula Being Used for Municipal Aid.  The only thing that determines how much aid a NJ municipality gets is the amount it got the year before.   The low inverse correlation (-0.37) that exists between a town's wealth and its state aid is a remnant of the time in the era before 2007, and likely before 2001, when municipal aid was last increased.

New Jersey has several streams of municipal aid, such as Transitional Aid for towns in distress and special transportation grants, but the total amount distributed is not large.  There is also a special aid stream for Trenton ($10 million in FY2021).

The bulk of municipal aid is Consolidated Municipal Property Tax Relief Aid and Energy Tax Receipts, which are actually supposed to be pass-through dollars collected by the state on behalf of municipalities:

the lion's share of the money that municipalities receive from the State is a partial replacement for funds that were originally direct sources of municipal revenue. From Public Utility Gross Receipts and Franchise Taxes, now distributed as Energy Tax Receipts Property Tax Relief, to Business Personal Property Taxes, Financial Business Taxes and Class II Railroad Property Taxes, all of which have been folded into Consolidated Municipal Property Tax Relief Aid, these revenues were intended for municipal use from their beginnings. When the State, at the request and for the convenience of the taxpaying businesses, became the collection agent for these taxes, it pledged to redistribute the funds back to local governments. So, from our perspective, these do not constitute new "aid" from the Treasurer of New Jersey. Instead, we see them as local revenues, temporarily displaced.

What this post looks at is what is called "Formula Aid," which is supposed to help municipalities pay for everyday operations.

Although there might be a rational justification for why one wealthy town gets a large amount of aid, like if it has a large number of visitors pass through or it hosts a lot of non-profit property, the distribution of municipal aid seems to be frozen in the 20th century, and is probably influenced by historic earmarks by powerful legislators. 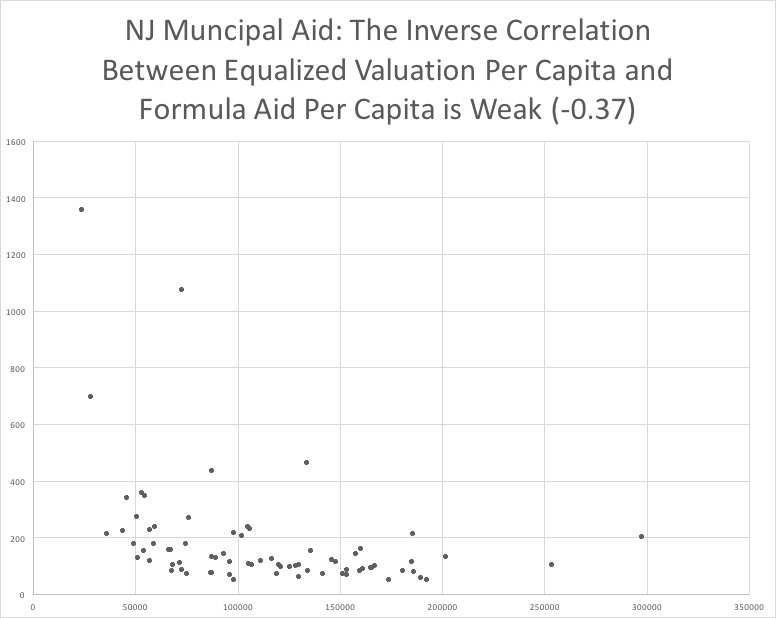 And the data for the towns with more than 30,000 residents is:

Lest anyone think this neglect is only a problem for middle-class towns, I need to point out that it's also affected NJ's high-poverty, low tax-base towns. 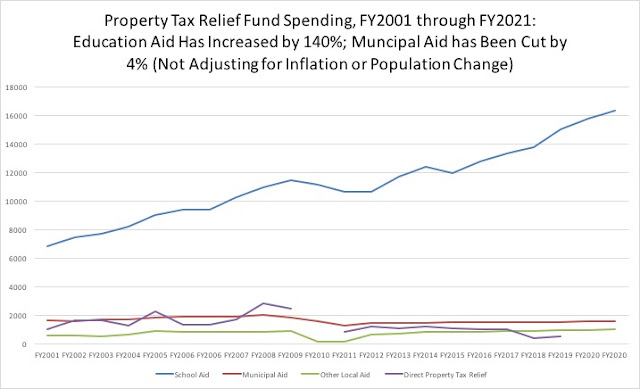 Posted by StateAidGuy at 7:20 PM No comments: