Adjustment Aid Has No Statutory Sunset

Adjustment Aid, sometimes called “hold harmless aid,” was created by the 2008 School Funding Reform Act (SFRA) to make sure districts would not see big drops in their state aid when the new formula went into effect. It was calculated based on their aid packages in 2007-2008, and was supposed to gradually phase out as districts adapted to their lower aid allotment.


And so do politicians, eg, Steve Sweeney:

The original formula was altered to include provisions that have prevented districts with increased student enrollment from receiving fair compensation at the same time other school systems are overcompensated with money for students they don’t have. These add-ons – “growth caps” and “Adjustment Aid” – were intended to be temporary but continue to be funded eight years later.


Ok, the above is not correct.  SFRA only allows the most marginal decreases in Adjustment Aid, and only for districts that lose enrollment after 2008.  There are no decreases allowed for districts whose wealth increases but whose student enrollment is stable.

The only section of SFRA that contains any references to reducing Adjustment Aid is this excerpted section:


For the 2011-2012 school year and for each subsequent school year, a district that has a decline in its weighted enrollment, adjusted for bilingual and at-risk pupils, between the 2008-2009 school year and the budget year that is not greater than 5% will receive Adjustment Aid in such amount as to ensure that the district receives the greater of the amount of State aid calculated under the bill or the amount of State aid that the district received in the 2008-2009 school year. In the case of a school district that has had such a decline in enrollment that is greater than 5%, the district will experience a reduction in Adjustment Aid in accordance with its percentage decline in resident enrollment that exceeds 5%.

(In reality there is an additional complication because the amount of Adjustment Aid the district is entitled to could (theoretically) change due to changes in Local Fair Share, but the basic rule is as above.)

The provision respecting the loss of Adjustment Aid is significantly flawed because it misses the following important scenarios under which a district's aid could become unfairly high:

So, SFRA's mechanism for the reduction of Adjustment Aid only allows for marginal cuts.

As SFRA is written, the only real reduction of Adjustment Aid would occur at a decades-long timescale, as inflation and state spending growth gradually push Adequacy Budgets and Categorical Aid spending upwards and Adjustment Aid erodes away under inflation and the increase in other streams of aid.

The inadequacy of the Adjustment Aid-loss provision in SFRA can be seen in the Department of Education's "2017-2018 Additional School Funding Scenario (Information Only)."

These funding scenarios give the amount of aid districts would get if SFRA were followed exactly as the legislature and Jon Corzine wrote SFRA back in 2008, meaning, with Adjustment Aid and the State Aid Growth Limits intact.

Under these scenarios, there are only 41 districts in all of New Jersey who would lose any state aid and the grand total of their losses is $11.6 million. 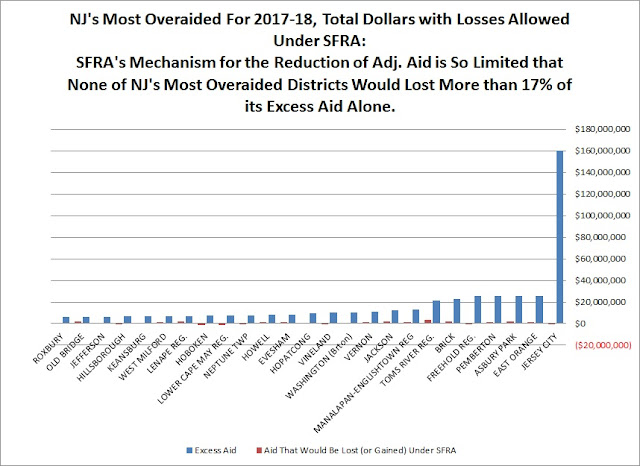 Asbury Park, which is overaided by $25 million ($11,000 per student) would actually gain $2 million, because the cuts to Adjustment Aid that Christie made in 2012-13 were technically against SFRA. Other districts who are actually substantially overaided based on their economic capacity-demographic needs, like Pemberton, Toms River, Brick, and Keansburg would gain as well.

Posted by StateAidGuy at 4:58 PM No comments:


This post and the underlying data were accurate at the time of writing, but in June 2017 the legislature changed the state aid allotment.  This post reflects the new, updated aid distribution.

The Department of Education has finally calculated Uncapped Aid figures.  I have gotten these data via an OPRA request and put everything online.

I do not know the Extraordinary Aid deficit, but it is at least $100 million.


And to provide extreme examples:

Posted by StateAidGuy at 4:31 AM No comments:

Email ThisBlogThis!Share to TwitterShare to FacebookShare to Pinterest
Labels: SFRA

The Skews of Capped Aid


Other than the Orwellingly named aid-hoarding mechanism known as "Hold Harmless Aid," the most unfair aspect of New Jersey's School Funding Reform Act is the State Aid Growth Limits, aka "Enrollment Caps."

(Technical Note: due to the cuts of 2010 and how low-aid districts then lost large percentages of their state aid, there are districts who would gain more than 20% from what they get now, however, that is technically due to the mechanism of Adjustment Aid, which overrides the State Aid Growth Limits for districts getting less state aid now than they did when SFRA was passed. Since this is a benign effect of Adjustment Aid, and Adjustment Aid is usually odious aid-hoarding, I prefer not to get into the weeds about it.)

(I got Capped Aid and Uncapped Aid amounts via an OPRA request to the DOE.  I've made the data publicly available here)

For instance, the following underaided districts all would be gaining the same amount in percentage terms if SFRA were operating: 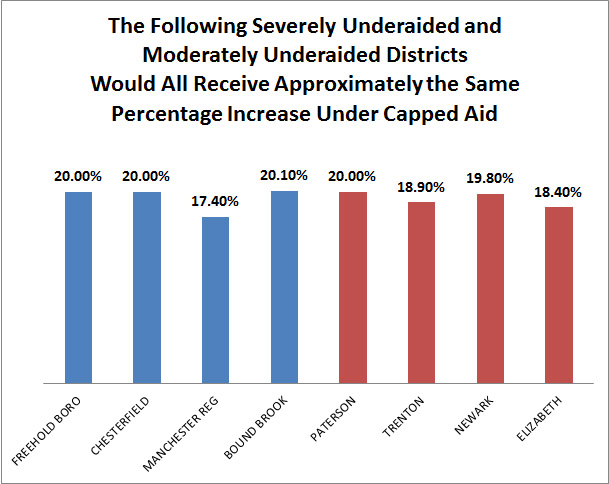 But in the all-important dollars-per-student, the amounts the districts are getting are completely different and skewed. 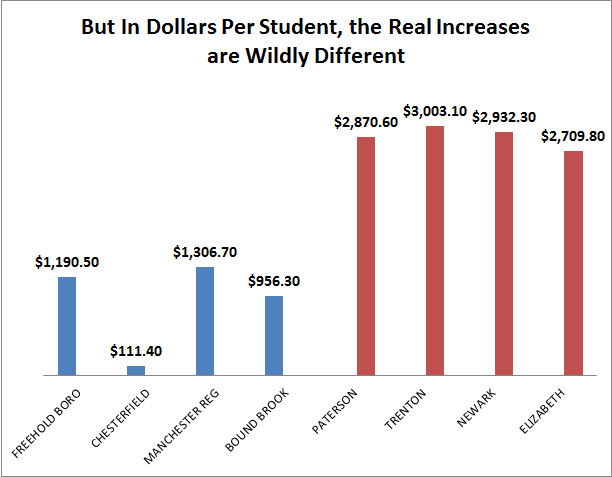 As a consequence of the percentage-based mechanism of the Aid Caps, new aid under SFRA goes disproportionately to large, moderately underaided districts. 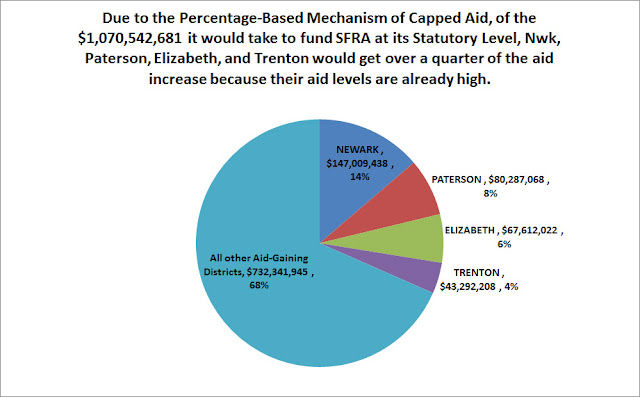 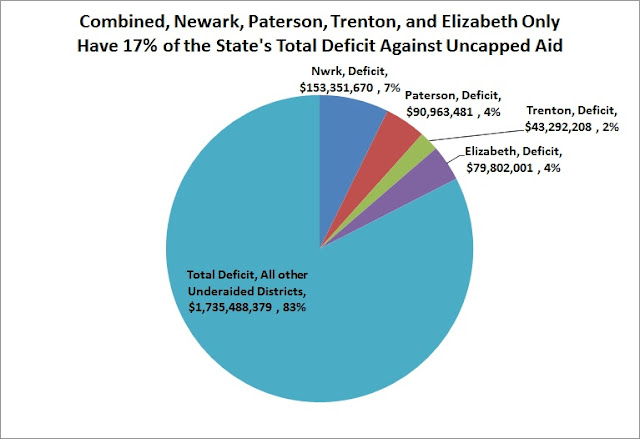 Posted by StateAidGuy at 5:17 PM No comments: