Considering how major a change it is, I'm surprised I don't see more journalistic coverage of New Jersey's shrinking population of young people and looming decline in school enrollment.

For most of New Jersey's history into the 1990s (with a few exceptions, like the fade-out of the Baby Boom), there was a gradual increase in births, which produced a picture of public school enrollment that looked like this: 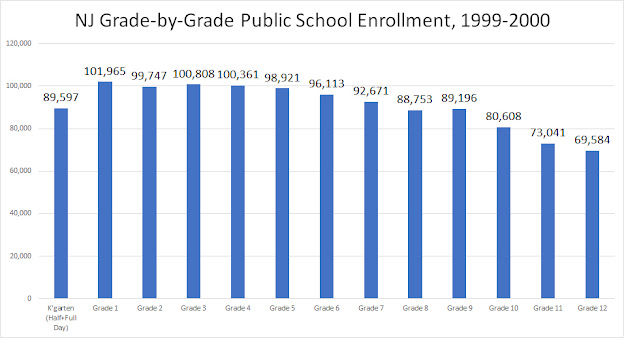 which evolved to looking like this during the mid-2010s plateau of enrollment: 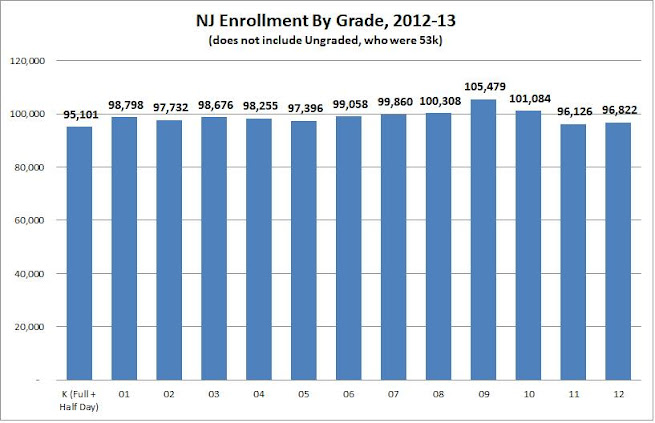 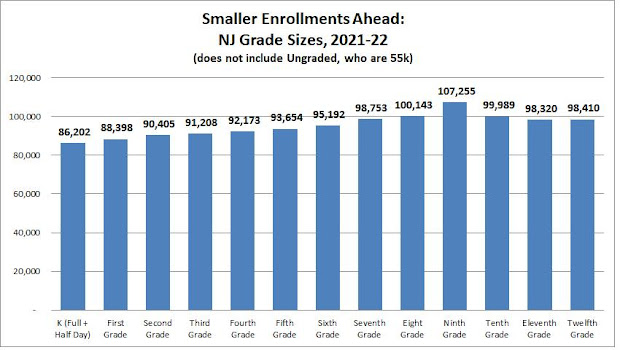 Given how 2021-22 kindergarteners were mostly born in 2015, when 102,200 babies were born, and NJ's birthcount fell as low as 97,146 in 2020, there should be at least another four years ahead of us of shrinking kindergarteners before stabilization when 2021's babies reach kindergarten in 2026, and even the kindergarten of 2026 will be very small by historical standards.

After 2026 is beyond my crystal ball.  Future birthcounts are unknowable, I believe they will stay low because of a general of pessimism in the country, fears of global warming, inflation putting further strain on family budgets, secularization, and a growing cultural orientation that children are just another lifestyle option.

I don't have firm proof of this, but I believe enrollment will also fall because of an increase in the percentage of kids coming from religious households who will not use the public schools.  Lakewood stands out in this respect.  In 2021 there were 4,908 babies born to white, non-Hispanic women in Lakewood, presumably almost all of whom are Orthodox Jewish.

On the other hand, Catholic school enrollment in New Jersey has not been good, despite the Covid uptick, so it is possible thousands more students will enter the public school system as the Catholic school sector shrinks.

Having a smaller enrollment isn't directly a problem for school budgets.  If anything, per pupil spending can increase, districts can pay teachers better and provide more extras for their students.  I predict many districts will adapt to shrinking K-12 enrollment by creating PreK programs and bringing those PreKs into district buildings.

Enrollment loss did play a role in districts losing Adjustment Aid, but that was an unusual circumstance that was necessary due to the severe underaiding of three-fifths of NJ's districts, different calculations for state aid in SFRA versus the previous CEIFA-Abbott system.  Now that New Jersey has almost completed the wrenching process of Adjustment Aid phase-out, most districts should gain state aid after the 2023-24 school year, except the ones with the most rapid enrollment losses.

In any case, NJ is going to have fewer students in the foreseeable future.  We are not going to resemble South Korea or Italy any time soon, or Children of Men, but smaller enrollments are something the state should plan for and maybe take advantage of.

Posted by StateAidGuy at 7:50 PM No comments: 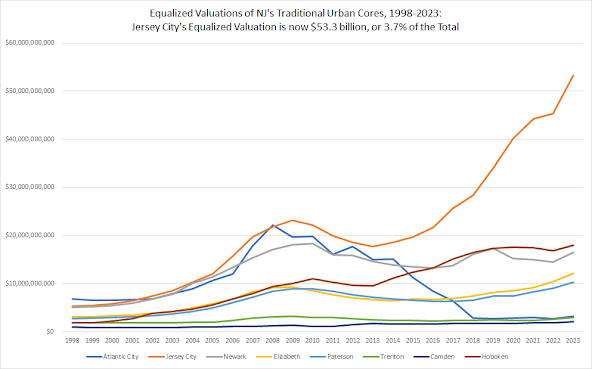 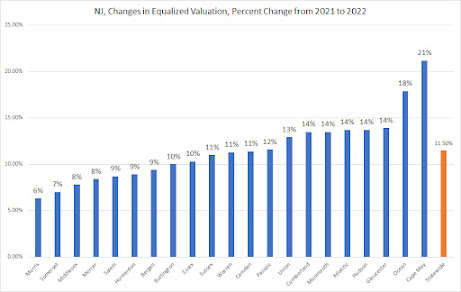