This post is about how the Abbott decisions of the 1990s and the ensuing flood of state money into the Abbotts allowed the Abbotts to freeze their school taxes.  This post provides shades of history as to why the Abbott districts, unlike poor non-Abbotts, pay nowhere near their full Local Fair Shares.


As usual, I got this data from the Department of Education via an OPRA request. I've put it all online on the Historical State Aid, Tax Levy, Tax Rate, and Spending Spreadsheets.


During these 26 years, inflation has been only 84% and the student population has increased by only a third. New Jersey's total Equalized Valuation (using adjustments for non-K-12 districts), increased from $509 billion to $1,165 billion, or a 128% increase. 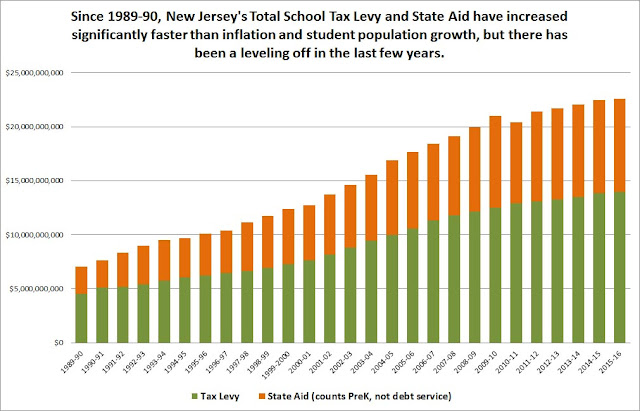 What is shocking is that how exempt the Abbotts have been from increasing their taxes.

When the Abbott II decision came out most of the Abbott districts had substantially higher tax levies than they have now (adjusted for inflation).

Contrary to what has been implied by the Education Law Center and NJ Supreme Court, the Abbotts did not have NJ's highest Equalized school tax rates.  Of the districts with NJ's 50 highest Equalized Tax Rates in 1989-90, only three of them were Abbotts.  (Salem City had very high taxes, but it was Abbottized much later) 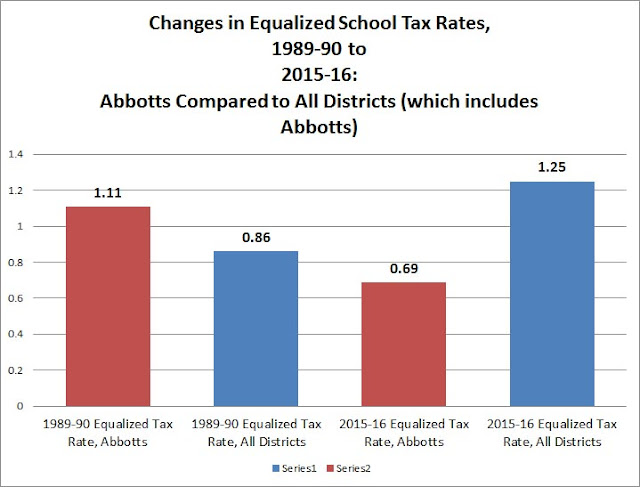 Most of the Abbotts have not done well in the last few decades, so it could be expected that their tax levy will lag the growth of the statewide tax levy, but poor non-Abbotts, by contrast, have been forced to accept significantly higher tax increases.

Not a single DFG A or B non-Abbott has been able to cut taxes in nominal dollars, although there are a few where the tax increases have lagged inflation.

On the other hand, over two years Jersey City slashed its school taxes from $90 million to $68 million.

By 1993, however, Abbott tax increases were gone and the Abbotts were being flooded with more state aid than they knew what to do with.  After this point, the Abbotts were allowed to keep their tax levies constant while the rest of the state - included the poorest non-Abbotts - had no choice but to increase taxes. 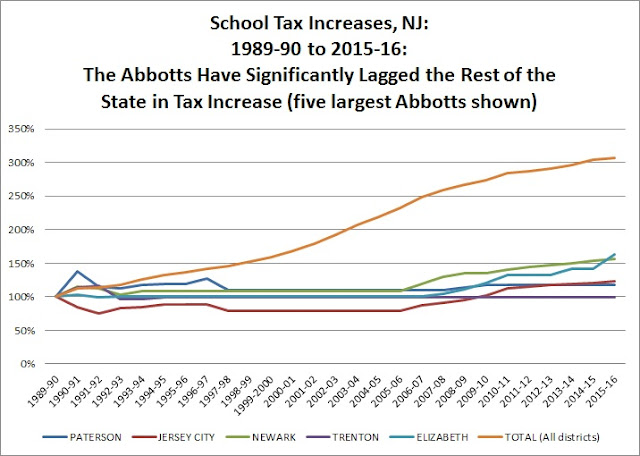 While school districts in NJ have accepted a massive increase in their tax levies that surges well beyond inflation and student population growth, of the 31 Abbott districts, only eight have increased taxes faster than inflation.  The other Abbott districts have had effective tax decreases over the last 26 years. 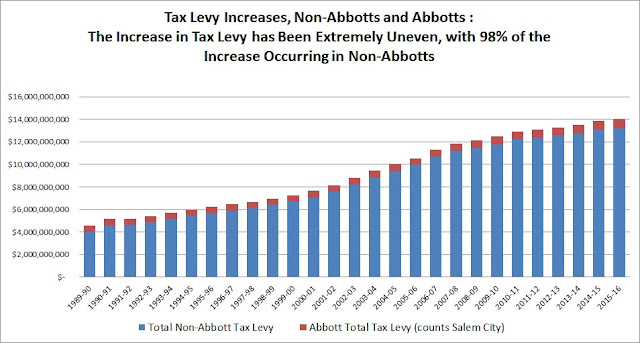 As a consequence of the megamoney that the Abbott districts got in the 1990s and 2000s they fell significantly behind their Local Fair Shares and became accustomed to paying very little for their schools.

Even today, eight years after SFRA passed, only half of the Abbotts even pay 50% of their Local Fair Shares.