A meme about Abbott academic performance I've occasionally seen concedes that by high school that all the effects of Abbott spending have faded out, but in elementary school the Abbotts do well.

An example of this occurs in Deborah Yaffe's 2007 history of the Abbott cases, Other People's Children, where she writes:


I don't know if this statement correct in 2007 or what research it was based on, but the claim that the Abbotts do well on the elementary level isn't correct today.

If you compare the elementary school scores of the over-Adequacy and near-Adequacy Abbott districts with the most severely under-Adequacy non-Abbotts the non-Abbotts do slightly better.

Lest this post be construed as a "money doesn't matter," argument.  Again, let me clarify once again my premises on school spending and Abbott.

The point of this post and related posts I've written to demonstrate #4, which is Abbott spending is beyond the point of effectiveness.

According to the Education Law Center itself, the eight highest spending Abbott districts (relative to their Adequacy Budgets) are Asbury Park, Hoboken, Gloucester City, Pemberton, Keansburg, Phillipsburg, who are all above Adequacy, and Burlington City and Pleasantville, who spend over $17,000 per student, but are slightly below Adequacy.  Asbury Park is the most over Adequacy, exceeding its Adequacy Budget by $5,617 per student.

The 18 elementary schools of these Abbott districts have an average FRL-eligibility of 70%. 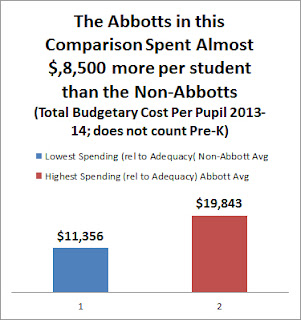 
The 19 elementary schools of these non-Abbott districts have an average FRL-eligibility of 71%.


Although in terms of student economic disadvantage these districts are very similar, they are worlds apart budgetarily.

The eight Abbotts have an average Total Budgetary Cost Per Pupil of $19,843.

The eight non-Abbotts have an average Total Budgetary Cost Per Pupil of $11,356.

Not even counting Pre-K and construction money, the Abbotts spend $8,500 more per student.

So with clear-cut budgetary superiority there should be at least a palpable academic superiority, right?

The eighteen high-spending Abbott elementary schools with tested students on average are, at the 18th percentile in statewide performance.

The eighteen low-spending non-Abbott elementary schools with tested students are, on average, at the 35th percentile in statewide performance.   (all averages in this post are unweighted) 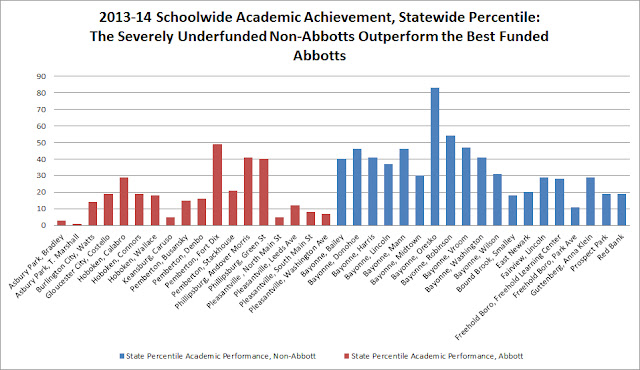 When you hone in on 4th grade scores on the old NJASK (which I consider the last valid year for scores due to PARCC-era opt-outs), the disadvantaged non-Abbotts do better.


On English Language Arts,  the 50th percentile for kids in the Abbott districts is 190 (the state average was 202.) 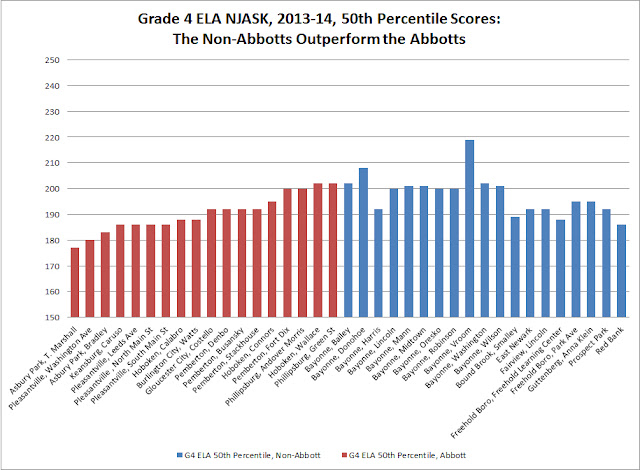 On math, the 50th percentile is for kids in the Abbott districts is 212. 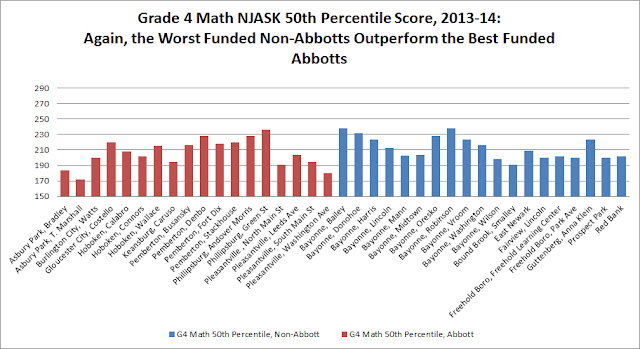 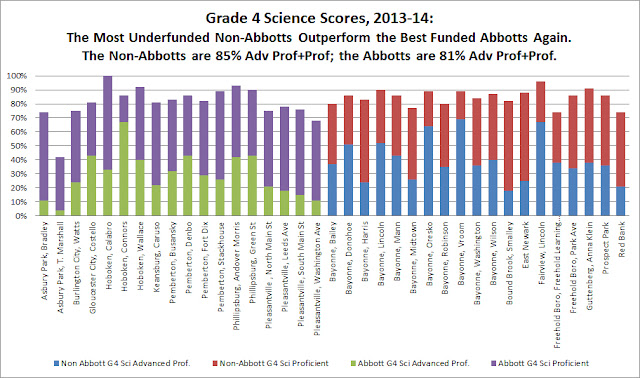 One of the justifications for Abbott superspending and superlative facilities was that you had to have schools so beautiful and light-filled that kids wouldn't want to be absent.  It seems to be yet another incorrect theory. 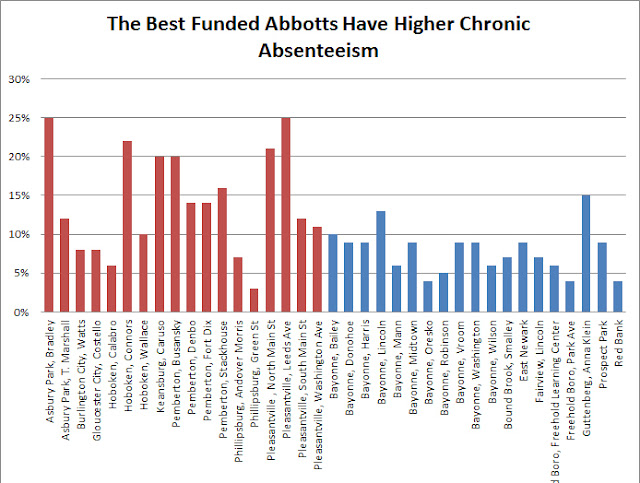 There are claims out there that Abbott spending is effective. The Education Law Center just came out with a press release, "THE GOVERNOR IS WRONG ON STUDENT ACHIEVEMENT," which
summarizes research that suggests that Abbott was working and cherry-picks Union City to argue that superspending is academically necessary and beneficial.

Governor Chris Christie attempts to justify his proposal to take massive amounts of school aid away from NJ districts educating the most disadvantaged students by making claims about student achievement that simply aren’t true.

The Governor says districts with high student need “get a big check from the state every year, [but] they are not making any changes in the way they educate children and they are not showing any increase in success."

The Governor is just plain wrong. The facts show NJ's most disadvantaged students making substantial gains over the last 15 years, and studies have documented the positive connection between increased funding and improved student outcomes.

But the governor is not "just plain wrong" about Abbott ineffectiveness, but he makes a foolish mistake in comparing Abbotts to their charter schools and not poor non-Abbotts.

The Abbotts have a clear cut, immense budgetary advantage. For Abbott Theory to be correct, a clear-cut advantage in spending should drive clear-cut higher academic performance than in districts that don't have Abbott money, but not only is there no clear-cut superiority, there's not even ambiguous superiority. In fact, the Abbotts appear to be doing worse.

And what if my sample isn't statistically valid enough to prove to Abbottists that Abbott superspending isn't effective?  So what.  If the Abbotts have 5% academic superiority for 50% spending advantage, that isn't a strong argument to sustain Abbott.

And finally, what was affordable in the 1990s isn't affordable today.  New Jersey's economy has been stagnant for years and we are one of the country's most indebted states.

State aid is zero-sum and more money for the Abbotts means less money for every other district including many districts who are just as poor as the Abbotts.

Abbott Spending Has Been Ineffective

The Unsung Excellence of Dover

Posted by StateAidGuy at 8:48 AM