The list of Abbott districts is based on poverty in 1984, not 2015.  Alas, even though a lot has changed in New Jersey and the world since 1984, the Abbott list has been almost totally constant.  Since the big Abbott II decision came out in 1990, the only change to the Abbott list was the addition of 1400-student Salem City in 2004.

I think the "Abbott Remedy" is very bad public policy in the first place. Since school districts have a continuum of need and local resources, there should be a continuum of state assistance.  Since the "Abbott Remedy" has always and only applied to Abbott districts, each successive court-ordered expansion of Abbott district privileges and aid and their denial to equally poor non-Abbotts has been more and more unfair.  If the New Jersey Supreme Court believes that a court cannot demand a comprehensive, unitary funding formula that would apply to all districts, then it should not have become involved in school funding in the first place.

The New Jersey Supreme Court thought it was righting suburban/urban "savage inequalities" based on property wealth, but in applying its remedy to the Abbotts and only the Abbotts, it has created another system of odious savage inequalities caused by differences in state aid.

Compounding the problem is that the Abbott list has never been updated.  Except for Salem City, no district has been added since 1990 and no district has ever been removed.  This post is for an alternate reality where the governor, legislature, NJ Supreme Court, and Education Law Center existed in the present and sought to use a list of specially protected districts that was up to date. 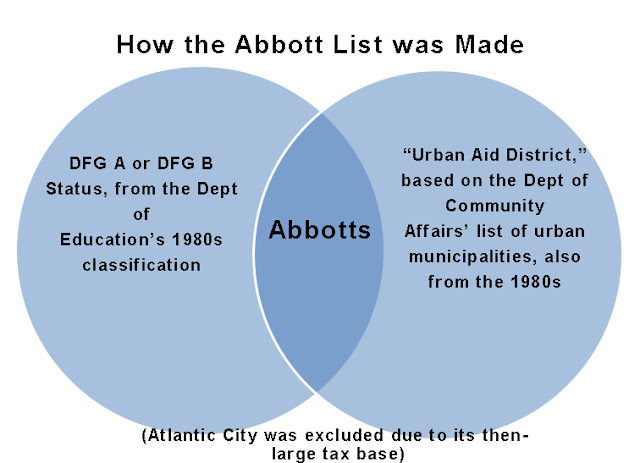 How the Abbott list was made in the first place

According to Other Peoples' Children, the NJ Supreme Court created the Abbott list by taking districts in DFG A or B that were classified as "urban" in a 1984 Kean administration report. Non-urban districts in DFG A and B were intentionally excluded, as was Atlantic City, because at the time it had such a high tax base. 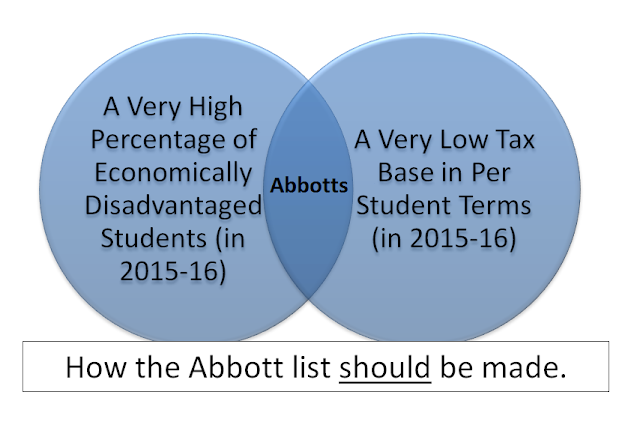 Many people have said it is unfair to only apply the Abbott remedy to urban districts.  I concur.

Therefore I have a simple, although strict, conception of what an Abbott district should be:

1) among the lowest in property wealth as measured by Local Fair Share per student
2) among the highest for the percentage of students who are FRL-eligible.

The thirty districts with the weakest tax bases are:


(Bolded means it is already an Abbott district.)

The 30 districts with the highest rates of students getting Free and Reduced Lunch are.

Who should be added to the Abbott list?
I've been very critical of the Bacon case in the past and remain so, even though this analysis shows that Egg Harbor City and Fairfield have legitimate rights to being Abbotts and Commercial Township and Lawrence have decent claims.

Since there are sixteen Bacon districts, this underscores the wrongness of the claims of the other twelve Bacon districts.  Also, although Egg Harbor City  and Fairfield should be Abbotts, they are not remotely among the most underaided districts in New Jersey.

Who should be off?

The passage of SFRA in 2008 was a way to avoid a contentious battle over delisting any Abbott districts.  At the time, Abbott districts strongly resisted giving up a dime, as Hoboken's superintendent, Jack Raslowsky, beautifully said in 2007, “The governor should not assist other districts at the expense of Hoboken or any of the other Abbott districts."

SFRA's solution was to Abbottize all poor districts in New Jersey, but with new state funding, not redistribution.

SFRA passed at NJ's revenue peak and since then there has been no new money for education.  Thus, the unjust aid distribution with its Abbott/non-Abbott disparities persists.  Thus SFRA has been a total failure. 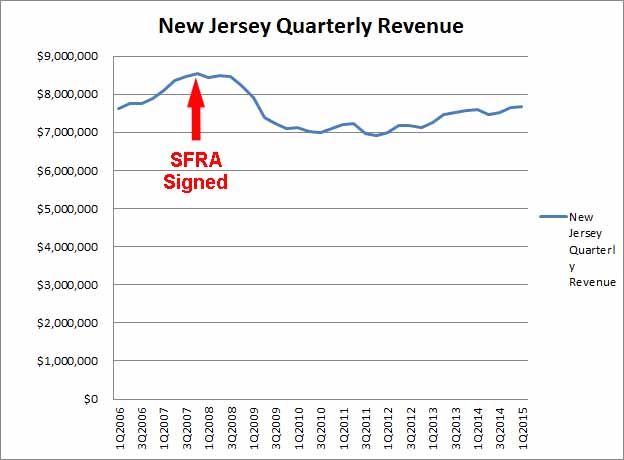 Since we can't Abbottize all poor districts in New Jersey, maybe we could change the Abbott list?

Posted by StateAidGuy at 4:37 PM