Freehold Boro: "We asked for help, the answer was silence." 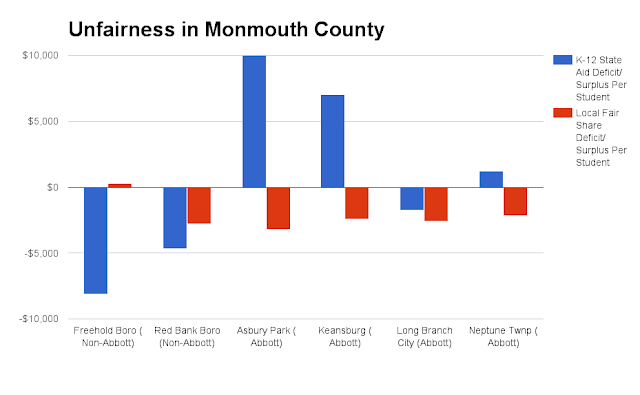 Freehold Boro has had two referenda to bond more money to expand the schools, but these referenda have been rejected.  Since Freehold Boro is already taxed above its Local Fair Share, these rejections are disappointing, but understandable.

The two Democrats wanted to talk about early childhood education and some expansion of Pre-K that Freehold Boro has recently received.

“There’s no doubt that the sooner you get a child, and you start educating the child, the stronger the child is going to be,” Sweeney said.
“I think we’re shortsighted when we think about the early interventions, ELL, even special ed., what you can do to change a child’s life that will cost us much better in academic interventions later in life as a resource to working families what we can do,” Ruiz said.

But what their hosts in Freehold Boro wanted to talk about was K-12 education and the state's savage underaiding of Freehold Boro.

"We're here at the end of our rope, we don't know what to do. The people in this town have twice said we cannot afford the taxes needed," Councilwoman Sharon Shutzer told the senators. The district asked local taxpayers last year to approve a $32.9 million spending plan to build more classroom space and relieve chronic overcrowding. Voters rejected the measure twice.

The senators said they were working to fix the school funding issue but remained focus on preschool as a much-needed investment.

"We’re here to recognize that you're overcapacity and there's a critical need and you're doing a job well done," said Ruiz. "We’re here to focus on the programming here and figure out how we can expand it and make it better."


The vice president of the Freehold Boro BOE reminded Sweeney and Ruiz that other districts with dropping enrollments are seeing their aid stay constant while Freehold Boro, whose population is increasing tremendously, gets no new money at all.

"We are not able to give the children of this town a thorough and efficient education. ... We did not create this problem that exists, with the influx and the overcrowding. We did not create it, and we do not have the power to fix it," she said. "And yet, the State of New Jersey and the federal government have all said: 'Fix it. You are charged with giving these kids a thorough and efficient education.' And we cannot do it. This town cannot afford it!"

Shutzer said the district's overcrowding issues are not new and that Freehold Borough representatives, including Beck, boarded a bus in yellow shirts several years ago to petition the state for help.

"We saw this coming, we asked for help ... and our answer was a silence that was deafening," she said. "I am appalled. I think this was supposed to be a positive meeting. But you know what? We're here at the end of our rope."


Jennifer Beck, the Republican who represents Freehold Boro in Trenton, agreed on the focus on K-12 aid.

“We have 500 more students in our schools than the state actually will allow. We are overcrowded to a point where there’s not a library in the Park Avenue school and kids are being taught where ever they can find space,” Beck said.

Steven Sweeney and Teresa Ruiz had wanted to talk about Pre-K, but Sweeney acknowledged that Freehold Boro's problems were real and made an economy-based assessment of why SFRA is underfunded.   (As opposed to the Education Law Center, which puts all the blame on Christie for SFRA being underfunded.)

Sweeney said the senators knew what they were walking into when they chose to visit a Freehold Borough school as part of their initiative, and weren't planning on a "feel good" meeting.

"We're not asking anyone to tell us that the sun's shining when it's raining, we're really not," he said. "The point is we know we have an issue with funding, we know that. And we know that if we had fully funded the school funding formula, and if the economy was better, things would be much better for everyone."


Freehold Boro pointed out to Sweeney and Ruiz that the matter wasn't only a lack of money for SFRA, the problem was how the money was distributed.

"Towns around us are having their enrollment decline and their funding stays the same. Meanwhile our enrollment continues to go up and we're spending less, yet we're being asked to do the same and more," Susan Greitz, vice president of the school board, told the senators. "It almost feels like we're being penalized ... it's very frustrating." 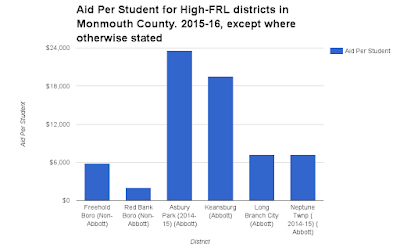 After multiple complaints from Freehold Boro BOE members and staff, Steven Sweeney let out a glimmer of awareness that of how unfair the distribution is

"None of that is lost on us and we want to be fair with it," added Sweeney. "There's going to be other discussions about school funding as we go forward to try to be more fair. We gotta make sure ... money is getting put in places in districts that are growing that don't receive additional funding and you have districts that are decreasing and are receiving the same."


I'm glad that Sweeney talked about districts with dropping enrollment maintaining their old aid levels.  This is certainly a problem, especially with Asbury Park's aid, but declining enrollment districts maintaining aid is only half of the problem with overaiding.  The other half of overaided districts are ones whose student populations are stable or slightly growing, but whose wealth has dramatically increased and therefore have the ability to pay for a much higher share of their schools than they used to.   Sweeney was speaking extemporaneously and in response to a question about declining-enrollment districts, and I'll cut him some slack, but Sweeney's comment doesn't completely frame overaiding correctly.

The problem for Freehold Boro isn't that the state hasn't increased its aid: In fact, Freehold Boro gets double now ($9.6 million) what it got in 2006-07 (then $4.9 million).  Freehold Boro's population has increased by 20% since 2006-07, but the state aid increase is even larger.

Freehold Boro's problem is that it started from a very, very low base. Even the $4.9 million that Freehold Boro got back in 2006-07 was only $3562 per student, even though Freehold Boro was then in DFG B. 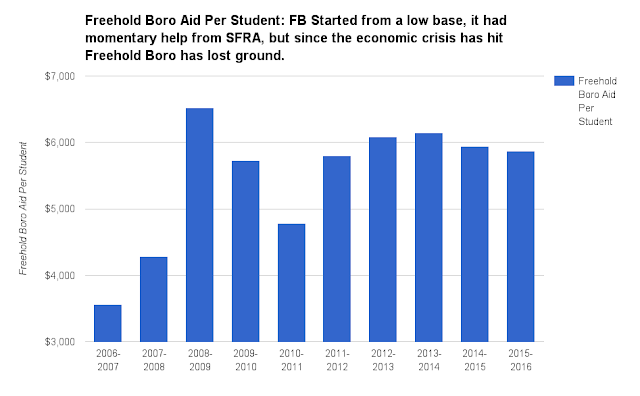 Overall, this is how one reporter summarized the visit:

There were slightly different agendas at work here today. The Democrats promoting their early childhood initiative. The district and its Republican senator calling attention to the overcrowding and underfunding in this largely Hispanic district. As the superintendent said, it’s nice to have in the room the people who just might be able to help us out.

Posted by StateAidGuy at 7:24 AM