For 2019-20 school year Phil Murphy proposed to increase overall K-12 opex aid by $206 million and redistribute another $90 million of Adjustment Aid, for an all-in increase of $296 million for underaided districts, with the bulk of that new money going to districts who are severely underaided.

However, despite the increase in state aid, the deficit for the underaided districts rose from $1.75 billion to $1.78 billion.

Although $296 million increase is very large and appreciated by the recipient districts, since the deficit constantly grows, the increase is only sufficient to prevent further backsliding into 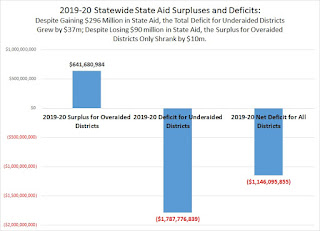 deeper deficit, as New Jersey struggles to advance against a strong headwind of inflation and then enrollment growth and tax base erosion that is disproportionately in districts who are already underaided.

Indeed, inflation's contribution to the growth of the funding target in 2019-20 is particularly large due to the FY2020 Education Adequacy Report and the $566 per student increase in the base cost per student.

Thus, the number of underaided districts slightly grew, and so did the deficit itself, which rose from $1.75 billion to $1.8 billion.

Despite the size of the $90 million reduction in surplus aid (ie, "Adjustment Aid"), the total amount of excess aid is only falling by $10 million, from $651.9 million to $641.7 million aid surplus, which simultaneously grew due to continued enrollment loss, tax base growth, and the DOE's changes to the formula for Local Fair Share.  The stability of Adjustment Aid is due to continuing enrollment loss and tax base growth, although the contribution of tax base growth is disproportionately from Jersey City alone.   (discussion below).

Lakewood, despite being overaided in 2018-19, gained $14.9 million in SFRA-non compliant aid, which the DOE is listing in its normal state aid releases.  Lakewood's increase also appears to increase the statewide amount of excess aid.

There are zero districts who get exactly 100% of their state aid, which is a contrast from 2018-19, when 16 districts got 100%. The slippage of any districts getting 100% is the reason there are apparent increases in the number of overaided and underaided districts.  (the lack of 100% funded districts is due to S2)

So this is incremental reduction in severe underaiding.


The district with the largest state aid deficit is Atlantic City, whose deficit is -$56 million, or -$8,534 per student.  (this deficit includes AC's $20 million in "Commercial Valuation Stabilization Aid,"

After Atlantic City, the districts with the biggest deficits are:

The reason the increase for Bound Brook hasn't been larger is significant loss of tax base there and corresponding increase in the Uncapped Aid target.  Although tax base erosion is the rarest cause of severe underaiding

In order to demonstrate the decline in severe underaiding, the following table shows the most underaided districts starting with 2016-17, the rock bottom year of state aid injustice, and how Steve Sweeney's fight for fairness (now supported by Phil Murphy) has brought results, although equity is still years away (and perhaps unattainable).

Although I consider deficits in dollars-per-student more significant than percentage deficits, something encouraging about 2019-20 is that there will be only three districts who get less than 50% of their Uncapped Aid: North Brunswick and Cumberland Co Vocational at 48%, and Woodbridge at 46%. 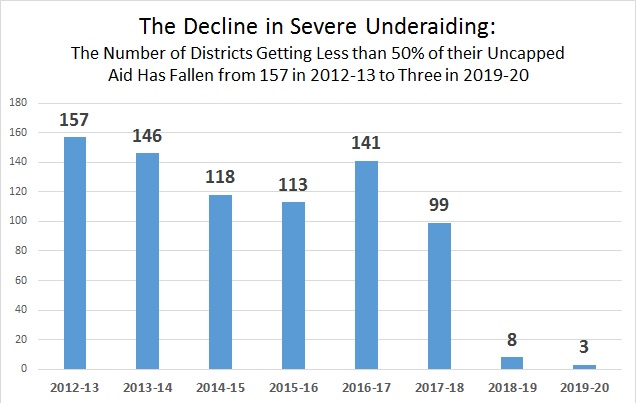 This scenario is true of many of the Abbotts.  Paterson, Elizabeth, and Newark all gained state aid, but saw their state aid deficits increase.  (A future post will examine the Abbotts in detail)

Newark grabbed headlines for gaining $24.7 million, but Newark is a district of 52,000 students, and that only is $469 per student.

Of normal districts, the biggest gain in percentage terms was Woodbridge, at 22% (+$7.4 million), but that is $531 per student.

The real biggest gainers, in dollars per student are:

There are 209 districts who are receiving more state aid than the SFRA formula says they should
receive, with a total surplus of $641 million.

Of those districts:
Asbury Park, as always, is the most overaided district in New Jersey, with a surplus of $11,026 per student.   (Asbury Park's state aid +186% of its SFRA target)  Asbury Park's excess aid alone is more than the $9324 per student that its high-FRL, severely underaided neighbor Freehold Boro will receive.

In percentage terms, Washington Township in Burlington County is the most overaided, getting $435,110 more for its 55 students than SFRA recommends, or 545% of its SFRA target.

Despite the loss of $90 million in Adjustment Aid (13%), a large number of overaided districts became more overaided, the most important of which is Jersey City.

The following 15 districts had the largest Adjustment Aid totals in New Jersey.  Altogether they represent 60% of the 2018-19 total.

The causes of the increases are different for each district, but the usual factors are enrollment loss and tax base growth, plus the tweaking of the Local Fair Share multipliers.

Which looks complex, but was really 0.69% of Equalized Valuation plus 2.3% of Income.

(1)  This refers to Jersey City's Adequacy Budget for Equalization Aid.