Abbott and Adjustment Aid at Their Most Extreme: The Overaiding of Asbury Park

Greetings from Asbury Park!  Where the boardwalk is cool, the beach is wide, rock & roll history is everywhere, the restaurants hip, and the schools are tops in New Jersey in state aid, getting $55.4 million for 2350 K-12 kids, a record setting $23,567 per student!

However, even given these facts about its challenging demographics, it is difficult to how Asbury Park's state aid is fair when its demographic peers get nowhere near as much money.  The next highest aided Abbott district, Camden, "only" gets $17,768 per student, nearly $6,000 per student less than Asbury Park! 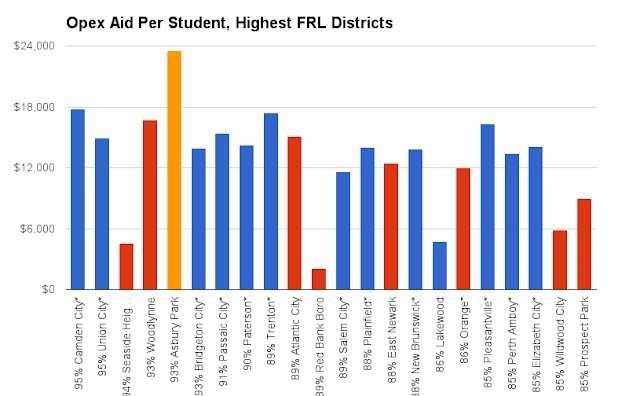 A couple of these districts, like Seaside Heights, Wildwood City, and Atlantic City have good tax bases and can use local revenue to produce adequate spending, but most cannot do this, especially Red Bank Boro, East Newark, Woodlynne, Lakewood, and Prospect Park. 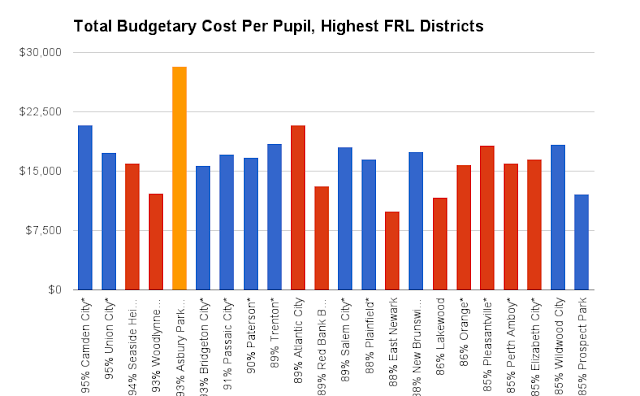 To add to the unfairness of Asbury Park's exceptional state aid, it actually has a better tax base than most of its peers.

Almost none of the Abbotts tax themselves anywhere near their Local Fair Share,  butAsbury Park taps less than a third of its Local Fair Share for a Local Tax Levy of $6,505,623, or $2,768 per student, which is low even compared to the other Abbotts.  Asbury Park recently had a three year streak of not raising taxes at all.

Though Asbury Park is below the state's average for tax base, Asbury Park is above most of its demographic peers in local resources.  If New Jersey's state aid were rational, Asbury Park would get less money than most of the other Abbotts, not significantly more. 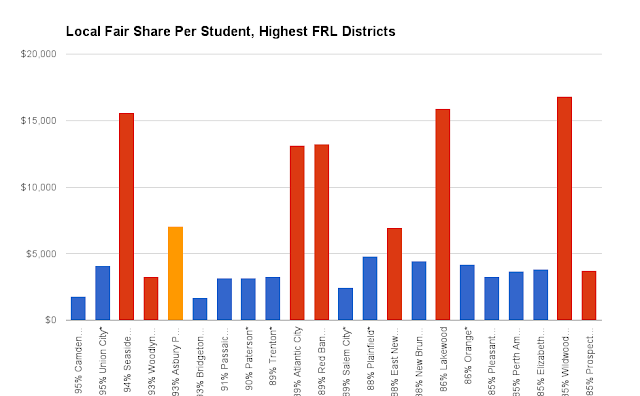 (The above chart shows how strong a claim Woodlynne, Prospect Park, and possibly East Newark have to Abbott status.)

How Did Asbury Park Get Here?
I admit I am not completely sure how Asbury Park's aid became so high. The rampup of Asbury Park's spending came during the Big Abbott Decade of 1996-2006, when Asbury Park increased by 243%, compared to an Abbott average of 202%.  However, Asbury Park did not get the largest increase among the Abbott districts.

One reason for Asbury Park's aid becoming so high in per pupil terms is that it has lost student population.  Unfortunately information on student enrollment is not available online prior to 2006-2007, but since 2006-2007 Asbury Park's student population has fallen from 2,700 to 2,350, or 13% and I know the decline goes back much farther than that. As that decline has occurred, Asbury Park has not lost state aid proportionally, thereby driving up per pupil aid levels and its spending.

Yet another reason Asbury Park's aid is so high is that prior to SFRA the Abbott districts could request/demand supplemental funds from the state that were outside of the aid formula.  Asbury Park may have been more aggressive than most of the other Abbotts in pursuing this supplemental money.

Asbury Park was involved in litigation against the state even outside of the neverending Abbott lawsuit. 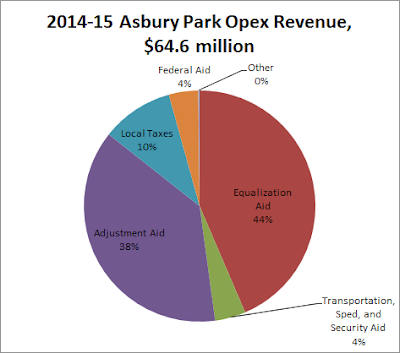 SFRA ended the Abbott privilege of being able to seek supplemental funds, but the funds Abbott districts already had were baked into Adjustment Aid, which is the major cause of Asbury Park's aid remaining so high.

If Asbury Park got only the amount of Equalization Aid, Special Education Aid, Security Aid, and Transportation Aid that SFRA recommended for it, Asbury Park's aid would be about $13,000 per pupil. 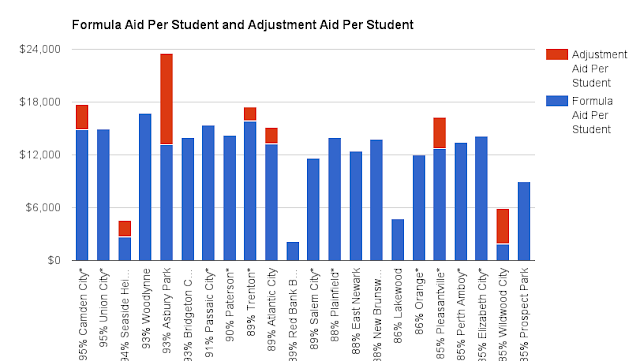 The huge Adjustment Aid that Asbury Park gets, $24,422,872, puts Asbury Park in the #1 position for Most Overaided District in New Jersey.

Asbury Park's schools do poorly by other measures too.


[The high school] has a 49 percent graduation rate. Only 2 percent of the senior class scored higher than 1550 on their SAT's, a measure of college and career readiness. This systemic failure doesn't start in high school: 87 percent of third graders can't read at grade level and 47 percent fail the basic skills test in math.

Asbury Park underperforms even Lakewood, whose schools spend less than half as much in the classroom as Asbury Park, where few kids get Pre-K, and whose system is notorious for bad management.

Asbury Park dramatically underperforms East Newark, whose Total Budgetary Cost per pupil is under $10,000 per student, only one third of Asbury Park's.

When Asbury Park does this badly compared to significantly less well financed peers, I conclude that there comes a limit to how much good more money can do, especially when more money falls into an inefficiently run school district.

Yes, in 1990 when the Abbott II decision was handed down the Abbott districts needed more money - just like many poor districts now need more money - but NJ Supreme Court's "Parity Plus" doctrine where the Abbott plaintiffs had a constitutional right to be funded above the level of the most affluent districts has not been good policy.  In the case of Asbury Park it's been insane.

What is glaringly wrong about Asbury Park is that it is so close to Red Bank Boro and Freehold Boro, two of New Jersey's most rapidly growing and thus underfunded and underaided districts. 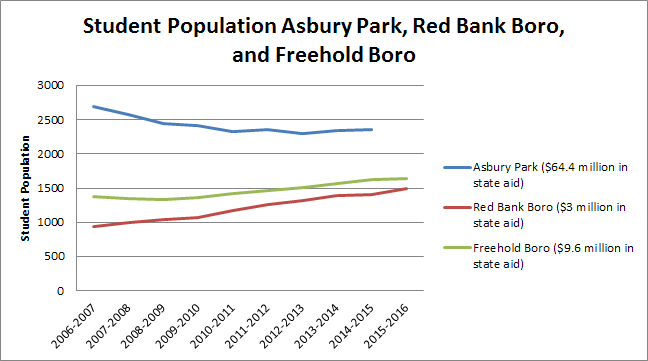 The Freehold Borough school district is emblematic of the many districts across New Jersey that are struggling to meet the academic and social needs of their students as a result of years of underfunding by the State. Rapid population growth has the district facing severe overcrowding without the resources to increase staff and facilities to appropriately serve all students.

The district currently has class sizes that exceed the minimums required for “high need” districts at all early elementary grades. For example, there are 25 students in kindergarten and first grade classes and one second grade class with 30 students, far above the 21 student threshold.

Freehold Borough students are also deprived of many of the supports, including reading interventionists and special education staff, that are necessary to ensure they read on grade level, a skill that is critical to their success in school....

Freehold Borough in Monmouth County is a preschool-8th grade district with a current enrollment of just over 1,580 students. Enrollment has increased 43% since 1998-99. Student demographics have also changed dramatically, with a doubling of the number of at-risk (low-income) students and a fourfold increase in Hispanic students. Over three-quarters of the district’s students are now low-income, up from 51% in 1998-99.

"We are educating an increased number of students with the same amount of money," Howe said. "I don't want to say our students aren't doing well... but certainly they could benefit if we got more money in state aid."

Will the state stand for that even if Red Bank Boro and Freehold Boro equal Asbury Park in size?

It looks like it.  The populations of Red Bank Boro and Freehold Boro have already converged with Asbury Park's and there is no Democrat that I know of who supports redistribution.  Since leading Democrats have now given up on fully funding SFRA and the caucus would rather give $1 million to Montclair than any of New Jersey's most underaided districts, it seems that there is not much hope for Red Bank Boro and Freehold Boro.

How is it that a Republican, Caroline Casagrande, who seems to have an economically viable proposal to help?

“The children (in Freehold) are grossly under adequacy,” said Casagrande. She called it "maddening" that 31 urban districts, formerly known as Abbott districts, absorb 60 percent of all school funding. “Our school dollars are still fully locked up in who was impoverished in 1986; leadership in both the Senate and Assembly have blocked reforms to redistribute those funds. It’s such an injustice.”