The Highs and Lows of Local Fair Shares in New Jersey

Well, if you are the School Funding Reform Act (SFRA) your answer is ALL OF THE ABOVE, because Local Fair Shares in New Jersey range from as low as 0.7% to as high as 2%, with a statewide median of 1.42%.

To demonstrate the variation in Local Fair Share another way, how about this real-world scenario?

Secaucus and Lawrence Township (Mercer) both have $4.8 billion in taxable property, so they should have the same ability to fund their schools, right?

So the divergence comes from the Local Fair Share formula itself!!

(If you're curious about what your district's Local Fair Share is as a tax rate, see this spreadsheet)

See note at the end of this post for where EV and Aggregate Income come from and what the state does for non-K-12 districts.

If a district is perfectly average in terms of its Equalized Valuation:Income ratio, and has an Equalized Valuation of $1 billion and an Aggregate Income of $300 million (which is near NJ's average ratio of 28.5%), its Local Fair Share will be:

But if another district has an identical $1 billion Equalized Valuation but a lot more non-residential property or second-home property, so that its Aggregate Income is only $200 million, its Local Fair Share will be:

On the other hand, if yet another district has the same $1 billion Equalized Valuation, but very little non-residential property and a lot of high-earners, so that its Aggregate Income is $400 million, its Local Fair Share would be $16.2 million, or a 1.62% school tax rate.   (eg, Kingsway Regional, Cherry Hill, Glen Ridge, South Orange-Maplewood)

Every school district in New Jersey must tax all taxable property at the same rate, so the regular homeowners are either hurt by or benefit from the incomes (or lack thereof) of their neighbors.

There are many unintended consequences of using Aggregate Income in the formula for Local Fair Share.
---- The Highest Local Fair Share Tax Targets
Are Mostly in South Jersey ----


The clearest observation I have of New Jersey's highest Local Fair Share districts is that they are overwhelmingly in South Jersey due to property values there being lower there relative to income than in North Jersey.

Lindenwold, Woodlynne, Wenonah, Hi Nella have Aggregate Incomes that are half of Equalized Valuation, and hence their Local Fair Shares are approximately 2%.


Winfield and Audobon Park are outliers here, but that is because they are highly-unusual mutual housing co-ops that originated as housing for industrial workers in World War II.  Most property in both towns is tax exempt, hence their Equalized Valuations are artificially low.  I do not consider them to be treated unfairly by the Local Fair Share formula.  On the contrary, I think what they are doing is similar to PILOT exploitation and both towns underpay in county taxes.

For instance, Essex Fells' Local Fair Share is $9.2 million, which would be a 1.84% Equalized tax rate, but Essex Fells' Adequacy Budget is only $2.8 million, so Essex Fells would never have to have a $9.2 million tax levy.  Essex Fells' actual tax levy of $4.6 million is thus more than enough for Essex Fells' students and a low tax rate for its residents.

It is not only conventionally affluent districts that will never need to tax at full Local Fair Share.  Secaucus' has a lot of non-residential property.

It is entirely possible that the affluent districts among the highest Local Fair Share tax rates, Saddle River, Essex Fells, Chester, Somerset Hills, and Mendham are on the list due to randomly having ultra-high income outliers living there.

The districts with the lowest Local Fair Share tax rates have an obvious thing in common, which is being at the Jersey Shore.

This tendency is from the fact that residential properties at the Jersey Shore tend to have extremely high valuations, but they are second homes with no permanent income attached to them.  Hence, they only contribute to a district's Local Fair Share through the real estate component of Local Fair Share, not the Aggregate Income component. 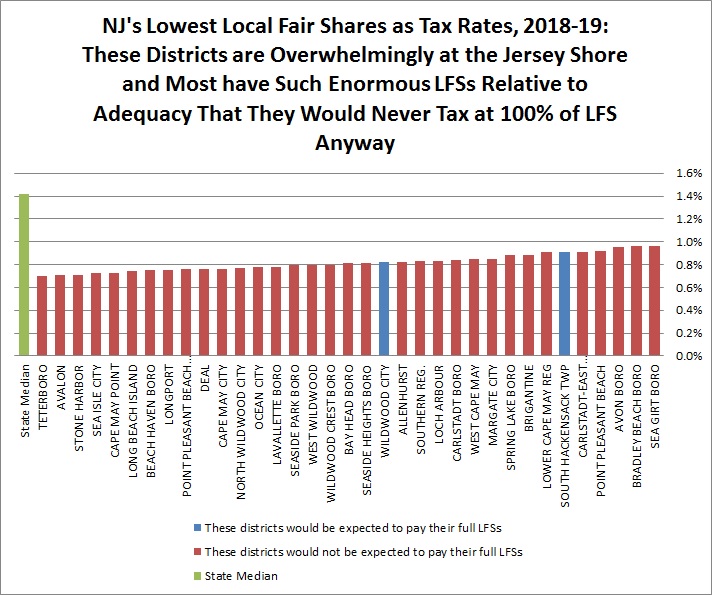 And this brings me to Brick and Toms River...

Neither Brick nor Toms River pays anything near its Local Fair Share anyway.  Both are at approximately 1%, not the 1.2% SFRA recommends.

---- The Income Crossover Point: Why Having Affluent or Frugal Neighbors Will Raise Your Taxes ----

But if New Jersey is going to use income at all, it should use something based on median income, not Aggregate Income, because Aggregate Income is distorted by high-income outliers and there is the unintended consequence of using Aggregate Income is that the more money residents make relative to their housing values, the higher their property taxes are supposed to be.

In fact, there is an Income Crossover Point where a frugal person or rich person will raise a district's Local Fair Share by an amount greater than his or her taxes.

Based on how Local Fair Share is computed by taking 2.3% of a district's income, the Income Crossover Point is the inverse of 2.3%, which is 43.5x.

Whenever someone's income is 43.5 times his or her school taxes, he or she will RAISE Local Fair Share by a greater amount than what he actually pays in school taxes.  Since Equalization Aid decreases as Local Fair Share increases, frugal and/or rich people can hurt a district financially.  (43.5 = 1 / .023)

Someone doesn't have to be rich to trigger a theoretical loss of state aid, but I'll use Phil Murphy as an example since he is a public figure with a known income and known property taxes, even though Phil Murphy's town of Middletown doesn't receive Equalization Aid. 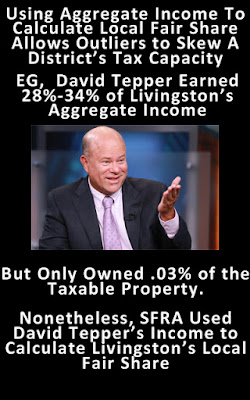 Livingston provides the supreme example of Equalization Aid loss since Livingston was the home of David Tepper, New Jersey's richest person whose taxable income was $800 million to $1 billion, which would be 28-34% of Livingston's total.   Although Tepper's house was spacious, it was not extravagant and only had an assessment of $2,155,900, or 0.03% of Livingston's total.

The fall in Livingston's Aggregate Income and Local Fair Share is totally anomalous.  All of the other affluent towns in NJ saw their Aggregate Incomes increase from 2014 to 2015.  We can thus conclude that the fall is entirely attributable to Tepper's departure.

Since a Board of Education cannot tax a rich person's income, it doesn't make sense to use Aggregate Income to calculate Local Fair Share.

And, If New Jersey ever gets to the point where every district receives 100% of its Uncapped Aid and that principle is followed year to year, New Jersey will develop problems because Aggregate Income & Local Fair Share -- and hence Equalization Aid -- fluctuate year to year.

Another oddity of using Aggregate Income to calculate Local Fair Share is that residents of tax-exempt buildings and PILOTed buildings will have their incomes count towards Local Fair Share, even though their properties are not taxable by a Board of Education.

New Jersey may not be able to ever have low or moderate property taxes, but at least we should have equitable taxes, in the sense where there is equity between taxpayers in different towns, where people generally pay the same property tax rates, unless one town is paying for extra services that other towns eschew.

The distortions from using Aggregate Income in the formula for Local Fair Share have been obscured by the completely off-formula distribution of state aid in New Jersey that existed because of Chris Christie and SFRA's own Adjustment Aid provision, but if New Jersey got to the point in 2024 where every district is funded at 100%, the disparities that result from SFRA's own core formulas will be harder to ignore.

And since Boards of Education can't tax income, getting rid of income as a component of Local Fair Share (or at least using a median!) would make sense
----
See Also:

To calculate Local Fair Share, the Department of Education uses Equalized Valuation from previous budget year (so tax year 2017 for 2018-19 state aid and Aggregate Income is from two pre-budget years previous, so 2016 for 2018-19.

If a town has a K-8 district and then has a Send-Receive relationship for its high school-age children, then the state calculates Local Fair Share on the district's full Equalized Valuation.

Posted by StateAidGuy at 6:43 PM