The release of Equalized Valuations for every town in New Jersey allows us yet again to get a snapshot of New Jersey's demographic and economic churn, plus get a preview of state aid changes for 2021-21 school year.

Equalized Valuation is the value of all the taxable property in a town.  It is used to apportion county taxes and, in theory, to distribute Equalization Aid (the most important stream of state aid).

As usual, growth is uneven, ranging from 0.1% growth for Hunterdon County, to 6.2% in Hudson County.  In fact, Hudson County's $5.9 billion was 17% of the state's total, which is in line with the trend of recent years.

The median town only gained 1.66%, which underscores how Equalized Valuation gains are always concentrated in a small number of towns.  Half of NJ's $34.9 billion net gain occurred in only 51 towns.

This is shocking, but part of a trend.  Since 2018, half of NJ's $71 billion net gain in Equalized Valuation has occurred in only 34 towns! 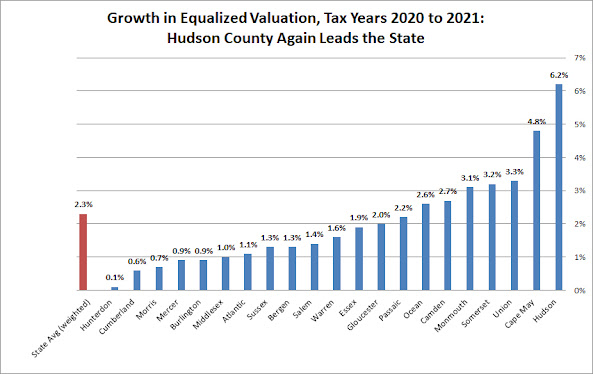 We often hear about an "urban renaissance" and gentrification, as a class New Jersey's cities are highly disparate.  Newspapers print many articles about gentrification in Newark, Newark lost Equalized Valuation (-1.85%) and hasn't had consistent growth recently.  Trenton (-0.8%) lost Equalized Valuation too.  On the other hand, Paterson gained 12.7%, but after having zero growth for 2020.

Jersey City, Orange, East Orange and Plainfield had excellent years, although after a few years of stagnation for the towns other than Jersey City.  A conversation about "urban areas" in New Jersey has little meaning, because NJ's urban areas differ so much from each other. 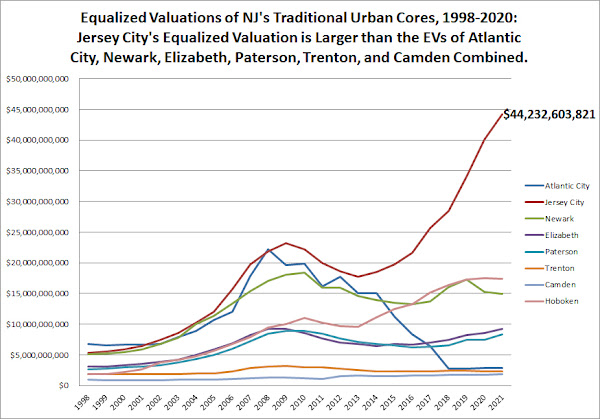 Perhaps the acceleration of suburbanization from New York City and hot real estate markets in train-line towns will be reflected in 2022 Equalized Valuation numbers?  But as of June 2020 (the end of the data gathering), there was no boon to report.
Several of the biggest gainers are towns with large logistics facilities.  Franklin Township, which is ranked #6, had an Amazon warehouse open up.  South Hackensack also has an Amazon distribution center.
Presumably the growth comes from the distribution centers themselves and employees purchasing homes. 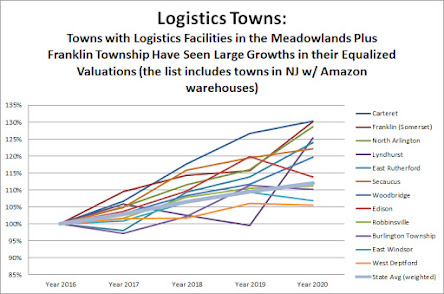 (Equalized Valuation x 0.01448)/2 + (Aggregate Income x 0.05277)/2
The formula is tweaked two years out of three, but large changes corresponding to inflation happen whenever an Education Adequacy Report is produced.  2021-22 will be another "tweak year," so we can use the above formula to estimate Local Fair Share changes from Equalized Valuation growth or loss.
(See "Education Adequacy Report Drives Big Changes to State Aid")
Jersey City merits special attention, since it's $4.1 billion gain will correspond to ~$29 million increase in Local Fair Share.  Assuming $20-$30 million in LFS growth from the increase in Aggregate Income, Jersey City's total Local Fair Share growth should be at least $60 million.  That increase in Local Fair Share will cause more of Jersey City's Equalization Aid to be converted to Adjustment Aid, which will then be subject to redistribution per the amounts established by S2.
In 2020-21 Jersey City was eligible for $91 million in Equalization Aid.  It should still have $~30 million in Equalization Aid in 2021-22, but 2021-22 will be the last year of Jersey City getting Equalization Aid.  Thereafter, Jersey City will be as wealthy in tax base as the suburban districts Judge Robert Wilentz compared it to in the Abbott II decision.
Over the last two years (2018-2020), Jersey City's growth has been the largest in NJ in dollar terms (+$10.4 billion) AND percentage terms (+30%)
Several of NJ's logistics towns with huge growth, Lyndhurst, South Hackensack, Franklin Township were eligible for small amounts of Equalization Aid in 2020-21.  In 2021-22 they won't be as their increases in Local Fair Share were multiples of what their 2020-21 Equalization Aid was.
Conclusion:
An increase in Equalized Valuation that exceeds the state's average will increase a district's Local Fair Share.  If the district is eligible for Equalization Aid, the district will experience a loss of state aid equal to the increase in Local Fair Share.
Right now NJ is attempting to get every district to 100% funding, so flaws in SFRA's details are irrelevant, but in the period when every district is 100% funded, allowing development will mean LESS state aid for a district.
Since tax offsets for new development is one way that municipal councils justify new development to themselves and residents who are wary of change, if tax offsets are substantially cancelled out by the loss of Equalization Aid, municipal councils will be less likely to accept new development.
Since NJ needs economic growth and housing growth, New Jersey's next generation of state aid law must address the disincentive to allow development currently in the SFRA/S2 paradigm.
-----
See Also:
Posted by StateAidGuy at 8:19 AM