We won't know what Phil Murphy's state aid numbers are until March 7th, and those numbers will be subject to amendment by the legislature anyway, but I wanted to attempt to make a forecast for 2019-20 state aid now and demonstrate the continuing necessity of redistributing Adjustment Aid.

For 2018-19 Phil Murphy and the legislature increased K-12 funding by $351.4 million and redistributed $32.1 million of Adjustment Aid, for a grand total increase of $381 million for the underaided districts.

Despite this $381 million increase, the deficit for the 370 underaided districts of New Jersey only fell from $2 billion to $1.75 billion, a fall of $250 million.

I cannot forecast how much increase will be due to enrollment increases and tax base erosion, but just to keep up with inflation alone, state aid for 2019-20 would have to increase by 2.9% of the $6.24 billion that underaided districts got in 2018-19, or $180 million.

K-12 opex  state is is overwhelmingly funded from income taxes, ie, the "Property Tax Relief Fund," but with a small assist from .5¢ of the sales tax.

Overall, it would not be reasonable to expect a 5.4% gain in the income tax for FY2020 unless there is another income tax increase.

Through December 2018 New Jersey's revenue badly lagged projections anyway, but assuming that collections rally in the second half of FY2019 and we do pull in $16 billion anyway (unlikely), we can make the following estimates for what New Jersey's new income tax revenue would be.

New Jersey is a Debtors Prison:

As I've said a million times on this blog, the real reason opex state aid is underfunded in New Jersey is because we are disastrously indebted and the bulk of revenue growth must go into the severely underfunded Teachers Pension and Annuity Fund (TPAF), plus other streams of education-related spending which are not K-12 opex aid, such as Post-Retirement Medical Care, Whitman-era Pension Obligation Bond debt servicing, school construction debt servicing, and Teachers Social Security.

For FY2019 New Jersey increased funding for the debt streams by the following amounts:
Grand Total of Increases for Above Items: $626.5 million

The increases for FY2018 were similar, except there was a much smaller increase for School Construction Debt service that year and modestly larger increases for TPAF and Post-Retirement Medical. 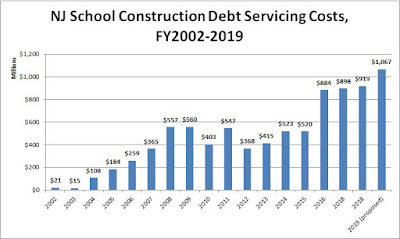 Anyway, as you can see, assuming that New Jersey increases by $600 million the above spending streams and NJ's revenue grows by ~5% there will be very little left over for K-12 opex aid (unless the state also passes additional tax hikes).

Other Discretionary Expenditures of the "Property Tax Relief Fund"

We have no idea what Phil Murphy will want to do budgetarily with those expenditures, but if Murphy does increase their funding, it will reduce the amount of money available for K-12 opex aid since New Jersey's budget is zero-sum.

For FY2019 Phil Murphy increased PreK by $57.6 million and he talks about PreK often, so we should expect another sizable increase for PreK funding.

Since Extraordinary Aid got a $0 increase in FY2019 and municipal aid only got a minuscule $12 million increase, I'd be surprised if we saw such tiny increases again.

Posted by StateAidGuy at 7:58 PM