("Equalized Valuation" is the market value of a town. It is computed annually and is used to apportion county taxes. It is supposed to be used to distribute state aid, but NJ's school funding law (SFRA) is non-operating.)

As usual, Jersey City and Hoboken continued their stratospheric appreciations.

Hoboken's Equalized Valuation rose from $13.3 billion to $15.13 billion. Last year Hoboken was in a tie for the fourth highest in NJ with Newark, but now Hoboken is in undisputed fourth place and is within $100 million of Toms River, the current third place occupant.

Hoboken's school tax rate will surely fall even farther below the 0.3% it has now.

Jersey City's school tax rate will fall below 0.5%.  If NJ distributed Equalization Aid under a formula, Jersey City would lose at least $30 million due to its increase in tax base.

Newark, Trenton, Elizabeth, Paterson, and Camden were more or less stable this year.

Atlantic City continues its collapse.  AC's EV was once the highest in NJ, but it is down another $2 billion and is now only $6.4 billion.  When new state aid figures come out in February 2017 Atlantic City will be ranked as even more exceptionally underaided.  Atlantic County as a whole lost over $5 billion in Equalized Valuation, so the whole region is hurting. 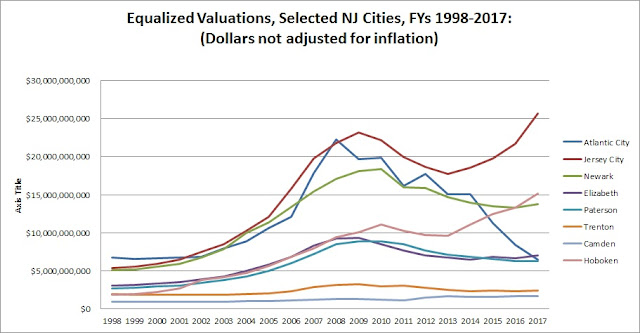 Two Cheers for County Taxes
Posted by StateAidGuy at 12:45 PM