The Unsung Excellence of Dover


Over the past few years, New Jersey has had two major narratives of excellence in urban education and "Beating the Odds."

The first narrative of excellence is that of charter schools.  Many people, including parents in poor cities, believe that charter schools, through their strict discipline approaches, limited employment protections for teachers, direct instruction, and extended school years present the best reform to improve urban education.  Of individual charter schools, the one most praised for "Beating the Odds" is North Star of Newark, whose supporters proudly assert that it beats state averages academically and even Millburn.  Although charter schools themselves would rather have more money anyway, since charter schools usually have lower budgets than traditional schools in their districts, charter schools are a beacon to people like Chris Christie, who oppose high spending in urban districts.

The charter narrative has gotten a great deal of scrutiny and criticism.  Critics say that not all charters outperform their demographic peers, let alone the state, that they have non-representative enrollment, and sometimes their high performance is due to heavy attrition rates.  Critics say that even when a charter school is doing well that the accomplishment isn't scalable since they aren't enough teachers out there who are willing to accept the difficulties of charter employment.

There is less of a positive counternarrative out there, but the most developed counternarrative for a regular urban district "beating the odds" is Union City, the subject of the nationally publicized book "Improbable Scholars" by David Kirp.  To Kirp and his audience, Union City is "where a strong majority of students pass the state’s tests, where inner-city education works, and where the burden of urban poverty and crime are almost always shed at the school door."

I'm not going to assess the validity of either the charter/North Star narrative or the Union City counternarrative here, but I want to discuss a third narrative of an urban district that overcomes even steeper odds than North Star and Union City:  Dover.

Dover is another exceptionally high-performing urban school system.  Even though it has gotten some national awards from the US Department of Education and US News, it gets virtually zero journalistic attention because it is a small district away from a major media market and because it is neither a charter that performs academic miracles by dropping "excuses" nor an Abbott that is saved by lawyers who get judges to order massive spending.

Dover is in DFG A, the lowest of the eight Factor Groups. Demographically, it is easily a peer of the Abbotts.

8% of Dover's students were classified as Limited English Proficient (LEP), compared to the state's average of 5% and slightly below the Abbott average of 9%.

So why isn't Dover an Abbott?  SILLY READER! Dover was in DFG D in the 1980s and the Abbott list is based on need in the 1980s, not the present.

Yet the School Funding Reform Act sees the disadvantage of Dover's student population and calculates an extremely high Adequacy Budget for Dover, $57 million for 3,214  students, or $18,000 per student, of which about three-quarters is supposed to come from the state.

And yet since SFRA is non-operating, Dover gets only $7,725 per student in state aid, which is barely half of the Abbott (unweighted) average of $14,624 per student per student.

Due to inadequate state aid and a weak tax base, Dover is unfortunately one of the ten lowest spending districts in New Jersey, with a Total Budgetary Cost Per Pupil of only $10,602 per student in 2014-15, compared to an (unweighted) average of $17,969 for the 31 Abbotts and $14,600 for the state as a whole.  Union City actually gets more state money for Pre-K alone than Dover gets total.

Dover has gotten some Pre-K, but only for 80-100 students total and only for a half day, whereas a two-year cohort in Dover has about 500 kids. In the Abbotts, Pre-K is universal for all 3s and 4s and is full-day.

Dover's Pre-K only started in 2011-12, so the tested students whose scores are discussed here didn't have it.

By Abbott Theory about the primacy of funding and even common sense, Dover should be an academically struggling district, but this is not true at all.  Despite its students being so poor and the district's underfunding, Dover is above the state's average. 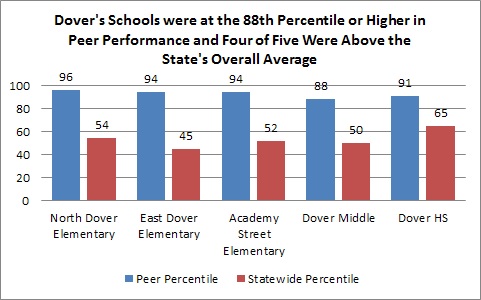 In peer performance, Dover's schools perform at the 88th-96th percentiles AND four of Dover's schools are above the state's average. Dover High School was at the 65th percentile statewide for 2013-14, meaning it outperforming two of the every three high schools in New Jersey despite being in the poorest 10% demographically and the poorest 1% budgetarily. 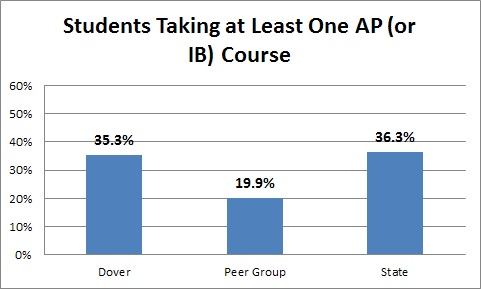 Dover's percentage of AP course takers taking the AP exam is in proportion to its peers and the state.

On the exams, Dover's students outperform the peer group by an even wider margin than they do in AP course taking and nearly match the state average. 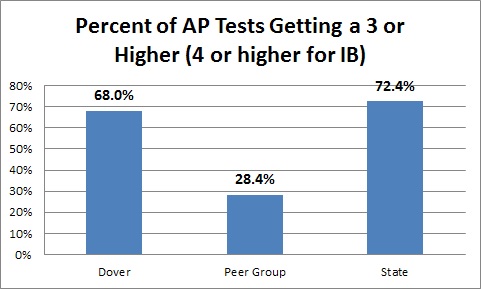 Dover's Peers All Outspend It And/Or Have Selective Admissions

It also must be emphasized that Dover is severely disadvantaged budgetarily relative to its peers and lacks non-representative/selective admissions.

Dover High School's peers only match it in terms of FRL and LEP percentages.  Budgetarily they are in a different league.

The three non-Abbotts Dover is "peered" with are higher spending too. Abraham Clark in Roselle Boro actually spends more than $16,900 per student.


Dover is in last place fiscally among its "peer group" and yet outperforms 90% of them.  That should be newsworthy. 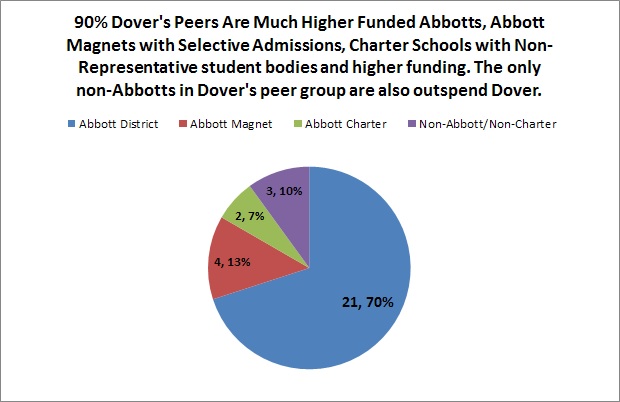 There is a Spending Floor Districts Must Meet, But There is Also a Point of Diminishing Returns:

When Abbott was first litigated in the 1980s the Education Law Center and the NJ Supreme Court never said that money alone would improve education performance in the Abbotts.  Instead they employed the locution that money (ie, high spending) was "necessary, but not sufficient." 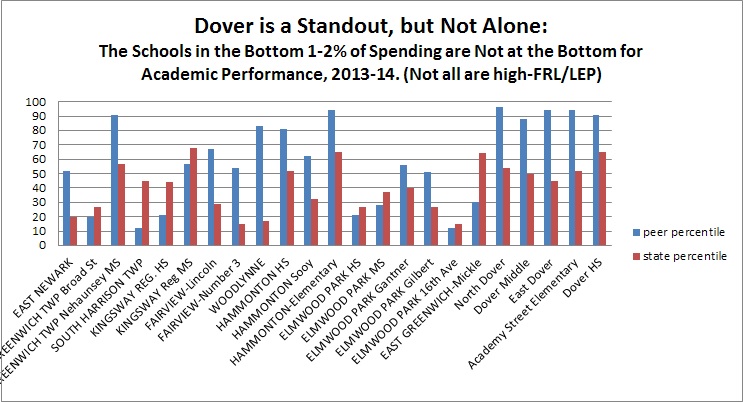 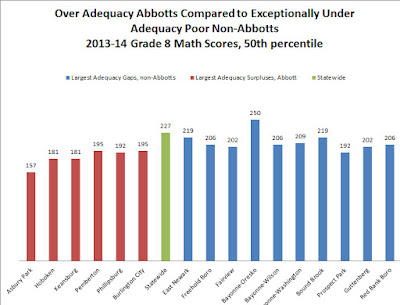 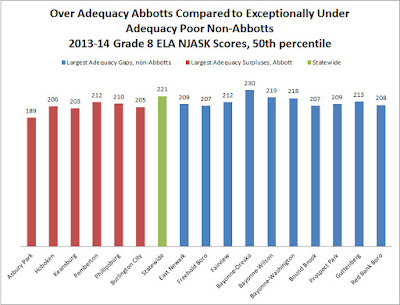 I agree, money is necessary, but not at the levels that Abbott and SFRA calls for.  And even if anyone is convinced that high-FRL districts need to spend $20,000 per student, how can the state afford this? School funding isn't a question of "should," it's a question of "can."  State aid is zero-sum and more money for one district means less money for other districts.

Dover's excellence, plus strong performances from other severely under-Adequacy districts and sub-par performance in most of the Abbotts, indicate to me that the Abbottists were incorrect.  Yes, there is a certain resource floor that all districts need to be above, but superlatively high spending that the NJ Supreme Court ordered was excessive and has gone into expenditures that do not raise student performance.   I think a more accurate saying about funding should be "necessary up to bring districts up to a floor, helpful beyond that point, and wasteful beyond another point."

Where the Spending Floor should be for a district and where its Point of Diminishing Returns sets in I can't say, but the floor is higher than what Dover spends but less than what what the Abbotts are supposed to spend.

The Education Law Center evidently believes that the Point of Diminishing Returns is somewhere way above $20,000 per student, hence their 2007-2009 opposition to SFRA, but the Education Law Center fails grapple with the fact that the State of New Jersey is insolvent and that giving so much money to the 31 Abbott districts deprives equally needy districts of the resources they need and induces crushing tax burdens in middle-income and lower-income districts across New Jersey.

I believe that money matters, which is why I maintain this blog and I am worried about Dover.

Dover's tax base is woefully insufficient and without increases in state aid it must annually make cuts. Dover's tax levy is only equal to 33% of its budget, so it can't even hold its own with the plausible 2% annual tax increases allowed under the tax cap.  (2% of 33% is only 0.6%)

To make the situation even harder, Dover's student population has grown by 10% since 2008 and the increase shows no sign of letting up, as younger cohorts are larger than older cohorts.

As a consequence of flat state aid and its inability to raise local revenue, Dover's Budgetary Cost Per Pupil has been falling: 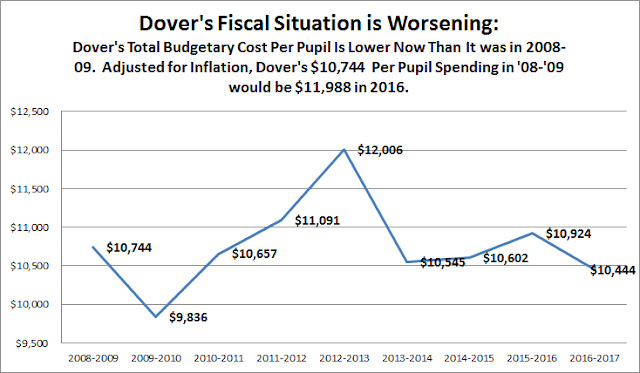 Dover does well academically, but I'm sure that its teachers are not well paid compared to higher-spending districts and there are missing opportunities and supports for students.

I've written countless times on this blog that Adjustment Aid must be eliminated, Interdistrict Choice must be made less generous, and ultra-high tax base districts should lose all state aid.  However, taking these three steps would only free up about $600 million and without another $1 billion on top of that $600 million, NJ cannot meet every district's uncapped aid.  NJ can put some new revenue into state aid too, but with the prioritization of pensions, I wonder how much money we can find, especially in the next recession.

What New Jersey needs to do is even-out state aid.  The Abbott spending target is beyond the point of effectiveness or economic sustainability.  The Abbotts do not outperform non-Abbott demographic peers.  There are a few other high-FRL/high-LEP districts who spend 60% as much as the Abbotts who outperform all or most of the Abbotts.

The Abbott (and high-FRL non-Abbott) Adequacy spending targets are too high.  Comprehensive state aid reform requires realism on what works and what NJ can afford.  In the mean time, prioritization of aid increases should be for low-aid/severely underaided non-Abbotts like Dover, not high-aid/moderately underaided Abbotts like Newark and Paterson.

What is Dover Doing Right?

If you know a journalist, give him or her a tip about Dover and get him or her to ask.

"Abbott Spending has been Ineffective."

Posted by StateAidGuy at 7:45 AM