What if Christie Had Never Become Governor?

Imagine someone invented a Trans-Dimensional Hyperdrive that allowed one to travel to a parallel dimension that was our same Planet Earth and same moment in time as we are, but where some event in our history had never happened.

A lot of novelists and television shows like to imagine an alternate reality where Germany had won WWII, but I'll look at something more prosaic:

What if Jon Corzine had been reelected in 2009? or a Democrat, maybe Barbara Buono, had defeated Chris Christie in 2013?

Well, I can't invent a Dimensional Travel Machine, but I don't need to because the equivalent already exists.

To experience a New Jersey where Chris Christie had never become governor just drive up I-95 north to the Nutmeg State, Connecticut, our peer in stagnant growth, massive indebtedness, decaying central cities, and an increasingly unappealing suburban landscape.

Gov. Dannel Malloy did everything in Connecticut that Democrats wanted Chris Christie to do in New Jersey.  He was a "dream progressive governor" who challenged other Democrats to "grow a pair," and passed two rounds of billion dollar tax increases; in 2011 increasing taxes by $2 billion and in 2015 increasing taxes by another $1.1 billion.  He imposed Combined Reporting, which the New Jersey Policy Perspective has been calling for in New Jersey, but instead of turning a multi-billion dollar deficit into a surplus, he just turned a multi-billion dollar deficit into another multi-billion deficit. After losing GE to Massachusetts, Connecticut is now handing out tax subsidies left and right, even $52 million to Bridgewater Associates, the world's richest hedge fund whose owner, Ray Dalio, has a net worth of $15.3 billion.

Connecticut's economy is in worse shape than New Jersey's.  While New Jersey has recovered 93% of jobs lost in the recession, Connecticut has only recovered 80% and has a 5.7% unemployment rate.

Connecticut's credit rating is falling.  In May 2016 it received a rare double downgrade from S&P and Fitch:

"Substantial revenue shortfalls over the past year have left Connecticut with what we believe are low reserves and an increasing share of the budget devoted to fixed costs....it remains unclear whether the state has succeeded in fully aligning its budget to potential future economic and revenue performance."

It made headlines in NJ when Mercatus recently ranked us the country's third worst indebted state, but who was #1? 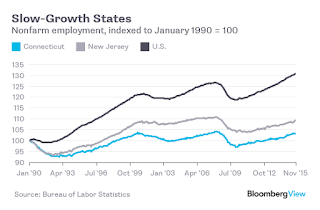 s indebtedness are Dannel Malloy's fault per se, only that his pursuit of policies which are the opposite of what Christie has done hasn't turned the Connecticut economy around or put the budget on a sustainable position.  Absent serious pension reform, Connecticut may be in worse shape than New Jersey in a few years.

I'm also not saying that Malloy and Christie are morally equivalent either. Malloy has a lot more integrity than Christie has. He hasn't been involved in any scandals, abandoned his state to run for president, endorsed Donald Trump, or created a traffic nightmare as political retribution.  And yet despite avoiding Christie's unforced errors, Dannel Malloy's approval rating is only 29%.

Faced with the reality that sometimes businesses do relocate (partly) for tax reasons, Dannel Malloy is now making the cuts that he avoided for several years. His latest budget eliminates 2500 state jobs, reduces spending by 4.4%, and eliminates school aid to wealthy districts. He is not raising taxes again. Malloy now talks about budgeting the same way a Republican would, saying government needs to "live within its means."
Malloy justifies his budget cuts and lack of tax increases thusly to a skeptical Democratic base:

“What’s changed is that the money’s not coming in the door...We live in a new dynamic in the United States where most states’ revenue is not growing at a rate to which we became accustomed.”

Malloy defends his previous rounds of tax increases, but says, “At some point, you simply can’t raise taxes to an extent that you price yourself out of the market.”

Anyway, the notion pushed by groups and individuals like the NJ Policy Perspective, the Education Law Center, and Phil Murphy that all Chris Christie has to do is govern like a Democrat and New Jersey will be a-okay doesn't seem plausible to me.
Like Connecticut, New Jersey has structural economic and budgetary problems and the getting a Democratic governor won't change that.  Any revenue increase from tax increases will be eroded away by structural growth of the state budget, as Connecticut's two rounds of tax increases have been eroded.   Any gubernatorial candidate who promises to pay for new programs or fund the pensions through "economic growth" is bullshitting you.

Steve Fulop and Steve Sweeney also talk about the magic of increased revenue, but Phil Murphy's claims are the most optimistic and far-fetched:

Aron: Do you believe in keeping taxes down if possible?

Murphy: If possible, but I think it’s going to be hard. I think it would be false to stand up and say, “I’m running because I believe we can cut taxes by X or Y percent.” This state, thanks to the current administration, we’re in a crisis and we’re going to have to lock arms and get out of that, but I’m a huge optimist about New Jersey. I’m encouraged because it’s been done elsewhere. Jerry Brown led California, another liberal Democrat, from a $25 billion deficit to an $8 billion surplus in five years. That’s the sort of change I hope we can see sooner, frankly. That’s the sort of change in our economy and our state I think that’s available to us and we can get out with the right kind of leadership.

Phil Murphy can talk about California all he wants, even though I see no comparison between a state that has half of the West Coast, has multiple megacities, and is 163,000 square miles and New Jersey, which has no major cities, which is 8700 square miles.  California has economic moats around moats and New Jersey just has highways to the rest of the country.  California has Hollywood and Silicon Valley, neither of which can likely be recreated in New Jersey.
Connecticut, which also lacks a major city and is only 5500 square miles, seems the more relevant comparison to me.

Posted by StateAidGuy at 7:22 AM