Even Demographically Hoboken has No Right to be an Abbott

In the wake of Hoboken's extreme gentrification its Abbott status has become occasionally controversial, where people ask "How a district full of luxury condos, office buildings, and hip restaurants can still get as much aid as it got when it was rotting wharves and abandoned factories?"


In Hoboken, for example, school officials said that a majority of their students come from housing projects, not the upscale condos whose owners often send their children to private or parochial schools. Seventy-five percent of the district’s students are poor enough to qualify for free or reduced lunch, the seventh-highest level among all Abbott districts, according to state statistics. Union City is first, with 92.7 percent, followed by Passaic (84.7 percent) and Asbury Park (81.9 percent).

However, this post isn't going to address economics.  It is going to show that even if you pretended that Hoboken wasn't property rich and that Hoboken's student population wasn't very small in relation to Hoboken's overall population, that even demographically Hoboken has no right to be an Abbott district.

Hoboken was being accurate, back in 2007 when it pointed out that it had the seventh highest percentage of students in the Abbotts who were FRL-eligible, but in 2015 this is no longer the case.  According to 2013-14 data from the Education Law Center, Hoboken's FRL-eligibility has fallen to 49%, only the 30th highest among the Abbotts. 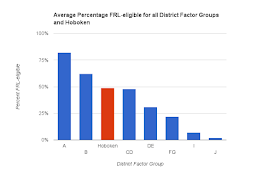 However, using the other Abbotts as the comparison group is deceptive since in 2007, and even more so now, there are numerous non-Abbotts which have higher FRL-eligible rates than Abbotts.

If Hoboken wanted to compare itself to all districts in New Jersey it would find itself having the 96th highest FRL-eligibility rate.


This fall in FRL-eligibility has occurred in the last few years.

Hoboken's FRL-eligibility fluctuates around 50% and is above the state average of 38% FRL-eligible, but not by a huge amount.  However, continuing membership in the Abbott list begs the question, if Hoboken must remain an Abbott because it is ~50% FRL-eligible, what about the 95 districts with even higher percentages of FRL-eligible students?  Or what about the many diverse districts, from North Brunswick to Cherry Hill to West Orange to Edison, whose average student is less poor than a Hoboken student, but whose overall affluence masks diversity and thus have many more (in absolute terms) economically disadvantaged students than Hoboken has? 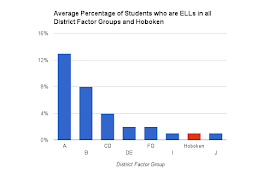 An Even Lower Proportion of Poor Children in Pre-K

The  percentage of kids getting "Free" Abbott Pre-K in Hoboken who are FRL-eligible is not released publicly but it is possible to make an estimate based on how many FRL-eligible children are in the average grade in Hoboken.

Hoboken has fewer than 1,200 FRL-eligible students.

Since this list refers to thirteen grades, we can estimate that there are about 86 FRL-eligible students in the average grade, although the younger grades skew more affluent.

In any case, Hoboken is using a sleight of hand when it refers to FRL-eligible students at all since it does not want anyone to realize that it has small populations of the other categories of at-risk students, English Language Learners and students in Special Education.  It's like a pickpocket tapping your shoulder while they remove your wallet.

This 1% figure is so small that I had to check every Hoboken school on the School Performance Reports to see if it was accurate.

Indeed the 1% figure is accurate, although it is rounded up from 0.8%.  In all of Hoboken there are only 21 ELLs, barely enough for a single classroom.

Special Education classification is subjective, so the state does not use it to calculate a district's Adequacy Budget, but even here, Hoboken has fewer students with special needs than the average district.  Only 10% of Hoboken students are in special education compared to a statewide average of 13%.


Doherty made the point that the individuals in Hoboken have a median income of $69,000, compared to $29,000 in Hackettstown. And yet Hoboken, not Hackettstown, has a state paid-for pre-K program based on its designation as an Abbott School District.

“You could be a Wall Street executive and before you hop in your limo you could drop your child off at pre-school paid for by the taxpayers of Hackettstown,” Doherty said.

Senator Teresa Ruiz, whose district is Newark and Belleville, responded:


“How do we bridge our achievement gap?” she said, identifying what she said was the subject at hand. “How do we expand high optimal programs? Hoboken [when designated an Abbott District] was a different community than it is today. It’s nothing we’re going to figure out today. Many Latino and African-American families needed to utilize those programs.”

This is a strange defense to make of Hoboken's Abbott status, since Abbott funding was tied to poverty and local resources, not explicitly to the size of the Latino and black populations.

In any case, Hoboken's schools are only 15% black, one point below the state average.

Hoboken's schools are 49% Latino, which is significantly above the state's average of 24%, but Hoboken's Latinos are almost entirely English speaking.

Kearny High School is also superficially similar to Hoboken, with 56.8% of students being Latino, but 30.1% speak Spanish at home and 13.6% speak other languages.

Likewise with Guttenberg, where 88.6% of students are Latino, but 53.3% speak Spanish at home.

No one thinks of Summit as a Latino bastion, but it is 15.9% Latino and 12% of Summit's students speak Spanish at home.  Summit has more Spanish speaking Latinos than Hoboken.

What I am saying here is that simply because a high percentage of Hoboken students are classified as "Latino" doesn't mean they are immigrants or even second generation.  Some of Hoboken's Latino students can even be wealthy.  Since state aid is not supposed to be tied to race in any case, Ruiz is making a poor argument in defense of Hoboken's historical Abbott status.


David Sciarra, an advocate for the children of the Abbott districts, called the criticisms of Hoboken a “red herring” because the district receives so little Abbott aid. More important, he said, were the educational reforms introduced under Abbott to address decades of neglect and concentrated poverty in urban schools. One such reform is the focus on preschool programs in Abbott districts. “The Legislature could remove Hoboken from Abbott, but it must have a plan in place to continue those educational reforms,” he said.


So Hoboken could cease to be an Abbott if he kept Pre-K and all its aid? What would the point of this be?

“The governor should not assist other districts at the expense of Hoboken or any of the other Abbott districts."

Sciarra has continued to defend Hoboken's Abbott privileges even as its wealth has grown and its baby boom has increased the Pre-K population.  As recently as 2013, at which time hundreds of New Jersey districts were underaided and the state was making no progress in ending the Abbott monopoly on Pre-K, Sciarra attacked the Hoboken BOE and state for creating waiting lists for Pre-K.

“A Supreme Court ruling made it clear there can be no waiting lists,” Sciarra said. “If additional parents want their children to attend pre-school, funding and space must be provided to accommodate the children otherwise their rights to attend the program are being violated.”

First, I don't consider a conversation about Hoboken's Abbott money to be a "red herring" because even if Hoboken "only" gets $20.8 million in Pre-K and K-12 state aid, New Jersey is broke.  For 2015-16 the increase in Pre-K and K-12 state aid was only $8 million.  I'm sure members of the Clifton Board of Education would love hearing that it's ok for Hoboken to get double the per pupil K-12 aid as Clifton since "Hoboken receives so little Abbott aid."

Also, Hoboken is not the only overaided Abbott.  According to the Education Law Center itself, sixteen of the Abbotts and another 200+ districts in fact get more state aid than SFRA economically says they need.  Although the case of Hoboken is extreme because Hoboken is New Jersey's richest district, there are echoes of it elsewhere.

Then there is the notion Sciarra has that the "rights" of kids in Hoboken are "being violated" by only a waiting list for Pre-K when much poorer,much more disadvantaged kids in Dover, Prospect Park, Belleville, Clifton etc do not have any Pre-K at all. However long the Hoboken waiting is was, I'm sure it was not as long as the wait for Pre-K that kids in Dover are going to have. The fact that the Abbott decisions only apply to the Abbott districts is a perversity of good governance and a fatal flaw of the whole crusade to use the courts to win what could never be won through normal legislation. It is the equivalent of Brown v. Board of Education only applying to Topeka, Kansas.

The Education Law Center would answer this question about disparities between Abbotts and non-Abbotts by saying the state should fully fund SFRA, which was supposed to fund Pre-K for all children in districts where more than 40% of kids are FRL-eligible and is supposed to increase funding for poor non-Abbotts.  In other words, the Education Law Center believes the solution to Abbott/non-Abbott unfairness is to Abbottize the whole state.

The problem with the Education Law Center is that it has no conception whatsoever that the state has a fiscal crisis.

If you read the Education Law Center's publications you'll find virtually no references to the recession, Pension Crisis, and collapse of the Atlantic City gambling industry.  The idea that New Jersey's high taxes might drive retirees and businesses out is just not on their radar. 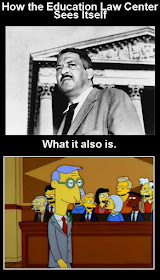 Remember, the Education Law Center opposed SFRA in the first place because it believed it would decrease future aid for the Abbott districts.

Meanwhile, while the Education Law Center exists in a utopian realm of infinite money for education, the state is stuck in a tightening fiscal vise of Pension Debt and the eventuality of another recession.

This means that SFRA is never going to be fully funded and if New Jersey wants fairness it has to be realistic and pragmatic regarding the Abbotts, especially Hoboken. Superintendent Jack Raslowsky statement, "The governor should not assist other districts at the expense of Hoboken or any of the other Abbott districts" is more reactionary and unrealistic than ever.

Unless assistance comes "at the expense of Hoboken" it is going to come not at all.

If the state cannot realistically increase Pre-K spending it needs to spend what it has more fairly.  This means means-testing in all the Abbotts and the deAbbottization of Hoboken.  When the Education Law Center sides with Hoboken against the state it is siding with the rich against the poor and middle class.  At best, since there are some poor children in Hoboken's Pre-K and K-12 schools, the Education Law Center is siding with some of the poor against the vast majority of the poor.

But back to Hoboken, for many years now there has been no economic justification for Hoboken to be an Abbott.  During this time Hoboken's defenders maintained that its students were poor and therefore Hoboken should continue to get high aid.  This argument has been irrelevant for fifteen years given Hoboken exceptional property tax base and proportionally tiny student population, but now the demographic argument is now as obsolete as the economic one.


The First Parts of the Hoboken Trilogy:

Dr. Anthony Petrosino's post about the departure of non-FRL families from Hoboken as children age.