Can the Abbotts Raise Their Own Taxes?


This post is going to be about school tax rates in the Abbott districts and an attempt to evaluate if these tax rates should be seen as too low, appropriate, or too high.

This is an increasingly important topic because of the state's refusal/inability to sustain the very high education spending that became the norm in the Abbotts from 1996 to 2006.  This post explores the capacity that the Abbott districts themselves have to support education in their own communities.

I was inspired to write this by this blog post "State politicians deny millions to Plainfield schools" by David Rutherford, a member of the Plainfield Board of Education.

Not surprisingly, Governor Christie has refused to follow the requirements of this act, passed right before he took office, leaving state funded districts in the red based on need. Plainfield is one of the most underfunded districts in New Jersey when it comes to state K-12 aid, according to data from the Educational Law Center. This year alone, the district would receive $22.1 million more if the SFRA was followed [referring to capped aid]. The total loss in funds since 2009 has been above $70 million, and the majority has come over the past four years. 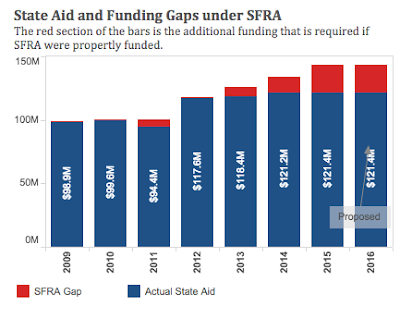 As explained in the August business meeting, the Plainfield Public Schools are facing a projected $11,180,431 shortfall for the 2017 fiscal year, which begins in July 2016. While gross state under-funding is part of that story, districts have, for the most part, learned to operate under those constraints – however painfully they must do so. Unfortunately, the attack does not end there [section on charters]

Plainfield truly is underaided. The $22.1 million (capped) aid deficit David Rutherford referred to equals $2,367 per student. The uncapped aid deficit is twice as high and comes in at $4,106 a student, the largest deficit of the Abbotts. (for 2015-16)

The deficit between Plainfield's actual Local Tax Levy and its Local Fair Share is $18.6 million, nearly equal to the state aid deficit itself and larger than the $11,180,431 budget shortfall that David Rutherford discusses.  $18.6 million divided by Plainfield's 9,220 students is over $2,000 a student.

The State of New Jersey has a method of calculating what a district's tax that depends on both Total Income and Equalized Valuation.  (Equalized Valuation is the market valuation of the property in a town)  These values are used in conjuction with multipliers to calculate something called "Local Fair Share."

The formula for Local Fair Share isn't a perfect formula (as we will see below), but it gives an idea of what a  district's resources are.

This isn't a very high figure, hence the state gives Plainfield $122 million in operating aid (over $13,000 per student), but Plainfield's Local Fair Share isn't trivial either.

Plainfield's actual Local Tax Levy is only $22.7 million, only 55% of what the state indicates Plainfield is economically capable of paying.

Plainfield is not alone among the Abbotts in paying significantly below its Local Fair Share.

Of the 31 Abbott districts only a single one, Burlington City, has school taxes above its Local Fair Share.

Of the 31 Abbott districts only three more, Phillipsburg, Salem City, and Garfield, even tax above the state's 80% average for taxes as a percentage of Local Fair Share.

The twist with the Abbotts is that their municipal taxes tend to be high.

This means that even though the Abbotts get a lot of state education aid, living in an Abbott district is usually not a great ride tax-wise because most of the Abbotts have high municipal taxes.  A flaw of SFRA's formula for Local Fair Share is that it makes no attempt to consider municipal tax burdens.

(unfortunately I don't have data on municipal local fair share)


Please notice the tax bills and how they would be fairly high in relation to residential income.

If you moved from a middle-class town to a typical Abbott your tax bill would be lower, but only because your property is worth less, not because of lavish state aid enables a lower tax rate. The money the state gives Abbott districts has to be spent on education after all.  It does offset school property taxes, but other taxes remain high.

As usual, where the unfairness lies is in how New Jersey fiscally brutalizes poor non-Abbotts.  Poor non-Abbotts have the same problems with paying for municipal government that Abbotts have but inadequate help with paying for their schools.  The residents of most Abbott districts pay fairly high property taxes but they get a lot for their money, including well-equiped and staffed schools and two years of state-funded Pre-K.


By contrast, the above non-Abbotts have overall tax burdens that are just as bad as the Abbotts but they get much less for their money.  Districts like the ones above are the ones where I think we should direct additional money.

So can the (ungentrified) Abbotts raise their own taxes?  I think they are going to have to raise their taxes just to be in a moral position to demand more money from the state government.  Plainfield's three year streak of not raising school taxes is something Grover Norquist would like.  Right now demanding more state aid but refusing to raise their own taxes is just demanding tax increases on other people or aid cuts to other districts.

The Abbotts are also going to have to raise their taxes because if SFRA were followed (Yeah Right!) the Abbotts would not gain as much as they did in the Big Abbott decade of 1996-2006 and some would be flat-funded.

The fact that the Abbotts will not be able to increase taxes enough to keep up their budgets without cuts just underscores however how we are leaving the Abbott Era.

The Abbotts still dominate the actual distribution of aid, but the year is coming soon when they no longer outspend most middle-income and many affluent districts.  The Abbott grip on the state aid distribution is as tight as ever, but the middle-income and affluent districts that can raise their own taxes will do so and soon outspend the Abbotts again.

Posted by StateAidGuy at 6:17 AM