One theme of this blog is that New Jersey is overtaxed is that having high taxes induces very low population growth.

States whose 2020 populations were underestimated the most in official estimates:

Instead of having a population growth that was expected to be the ninth slowest in the US, our population growth was actually the 26th slowest, meaning 25th highest.  New Jersey's growth of 5.65% is thus at the median of states, and only somewhat below the national weighted average of 7.4%. 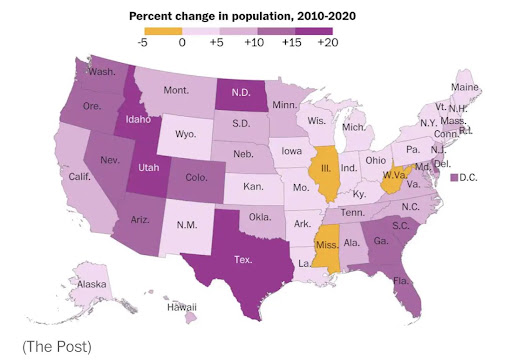 Faced with the reality that NJ had solid population growth in the 2010s, I have to admit that perhaps my thesis that high taxes are strangling New Jersey is exaggerated.  More people are either unaffected by NJ's high taxes, tolerant of the high taxes, angry but stuck here, or supportive of New Jersey's taxes than I thought.

Thus, the cause of the Census's discrepancy must be a large underestimate of immigration and/or an overestimate or net domestic outmigration.  It's entirely possible that thousands more people are living "in the shadows" in NJ than anyone realized and the Census's estimates missed them.  It's also possible that the 2010 Census count for NJ was an undercount.
Although those of us who warn about the negative effects of high taxes on population growth must be humble now and rethink our positions, in terms of economic growth, the 2010s were a bad decade for New Jersey, with our 2007-2018 income growth coming in at the country's eighth lowest. 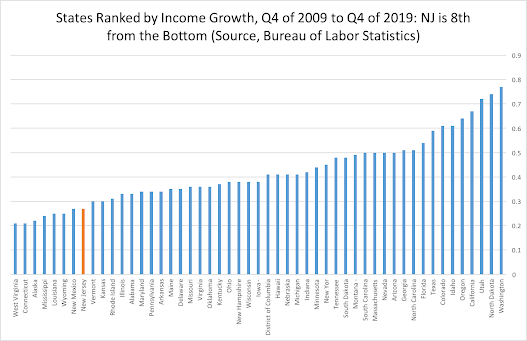 And job growth was the 16th lowestL 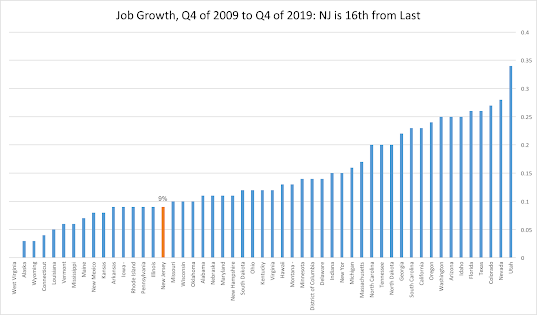 New Jersey's growth in the 2010s isn't exactly vindication of the progressive case either, since a conservative named Chris Christie was governor for eight years of that period and New Jersey's property taxes increased more slowly than in previous decades.
If someone argues that New Jersey's average population growth validates a highly-progressive tax structure, the population growth of high-earners in New Jersey, based on verified IRS data, is still among the country's lowest.
New Jersey's growth is also highly uneven, although that is probably unavoidable. Here's our growth in Murphy's first two pre-Covid years. 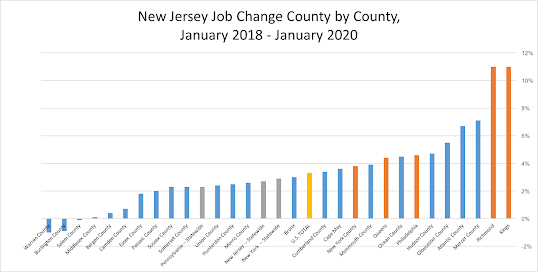 Anyway, it is a time to rethink demographic, population, and fiscal conditions in New Jersey.  Are taxes are damaging as I thought?  No.  But is New Jersey still overtaxed and is our budget out-of-whack with neglect of non-PreK-12 items?  I think so.

EJ McMahon presents some interesting ideas about the Census's underestimate of NJ's population:

Where are all those people?

These factors don’t explain the trends in all immigrant-intensive states, however. For example, the difference between Census estimates and the 2020 official Census in California, Florida and Texas were tiny at 0.2 percent, 0.4 percent and 0.6 percent respectively. New Jersey, on the other hand, had the largest percentage difference between its 2019 estimate and 2020 census count: 4.6 percent.

The WSJ also documents that Covid produced a huge movement into NJ from NY, although that would have mostly taken effect after the Census's snapshot day.

Posted by StateAidGuy at 7:17 AM