Good and Bad in the Lakewood State Aid Case

One of the most significant state aid news events of the past month is the decision by an Administrative Law Judge, Susan M. Scarola, that the School Funding Reform Act is not necessarily unconstitutional for Lakewood, but that the Commissioner of Education could decide on a special budgetary remedy for Lakewood.

An administrative law judge has determined the public school district cannot fulfill its constitutional mandate to provide students a "thorough and efficient education," but stopped short of determining that the state funding formula is unconstitutional.


In a non-binding decision Judge Susan Scarola recommended that the New Jersey Commissioner of Education conduct a needs assessment of the school district's ability to meet its obligations and make "appropriate recommendations to the district."

The decision scarcely binds the Acting Education Commissioner Dr. Angelica Allen-McMillan to do anything; the recommendation may be adopted, modified or rejected by Allen-McMillan. But the harsh assessment — that the school district cannot meet its constitutional mandate — puts fresh focus on the troubled school district and pressure on the state's top education official to intervene.

The situation in Lakewood is complex, and I agree and disagree with the ALJ's decision.  I agree with the ALJ that Lakewood has the capacity to increase its local taxes, but I disagree that SFRA might produce an adequate state aid amount for Lakewood even if Lakewood paid 100% of its Local Fair Share.  If you look at Lakewood's unique demographics, there is no possibility of that. (See "The Origins of Lakewood's Budget Disaster")

The School Funding Reform Act bases Lakewood's Adequacy Budget, and hence its Equalization Aid, on the number of students who are enrolled in the public schools, which is 5,896 for 2020-21. 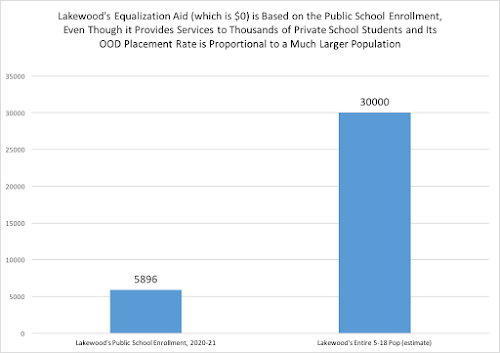 Equalization Aid is meant to be a district's "all purpose state aid."  Equalization Aid, along with the local tax levy, that is is supposed to be used for everything from teacher salaries to basketballs to furnace repairs to reading coaches, to most relevant for Lakewood, Out of District tuition and private school transportation. 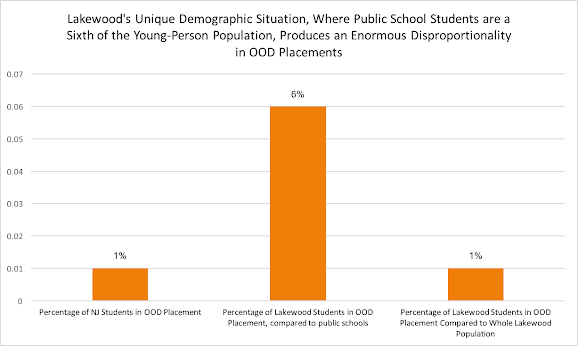 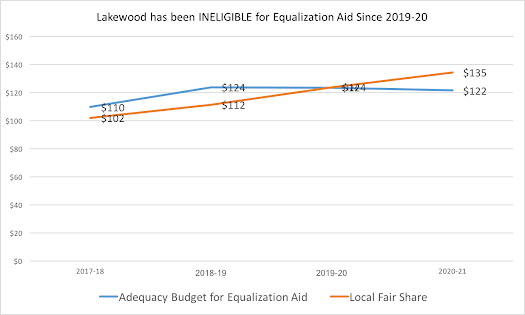 In a normal district, private school transportation is a tiny expense and Out of District tuition falls in a range where the local tax levy, Extraordinary Aid, and, if relevant, Equalization Aid cover it.

But not Lakewood, because Lakewood's public school population is only a sixth of the total population.  Lakewood's 362 students in special ed private schools out of ~35,000 are at New Jersey's 1% average, but they are over 6% of the public school enrollment of 5,896.

I believe the logic of the Lakewood situation indicates that SFRA doesn't work for Lakewood, but something worrisome about the ALJ's decision is that it is unclear if she realized Lakewood was already ineligible for Equalization Aid.

The challenge is that when taxes were raised, they covered public schools and State aid was increased. But now, in Lakewood Township, the number of public school students stays about the same, while the non-public school student population goes up about 10% per year. This affects the budget in transportation, because Lakewood has to pay the LSTA $1,000 per student per year, which actually comes to about $710 per student after State aid is factored in. Usually taxes and State aid are sufficient for most communities to cover this expense, but in Lakewood, even with categorical aid and equalization aid, it is not enough because the equalization aid and the categorical aid are frozen. It is not enough because increased taxes do not cover the costs.

She does quote a witness who predicted Lakewood's Equalization Aid would go to zero, without realizing it already had.

The district has a revenue problem. The State-aid funding formula works well for 99% of the state. It does not work for Lakewood because the district cannot contribute to its adequacy budget because wealth and ratables are taken into account when calculating aid. The district gets some equalization aid. Lakewood has a base of 36,000 students, where one-sixth of the students are in public school and five-sixths are not.

Also, Lakewood never was listed as getting Adjustment Aid.  It is among the small number of districts who flipped from being underaided to overaided in 2018-19, but it never had a sustained stream of Adjustment Aid like most overaided districts did.

The ALJ also conflates Lakewood's loss of Equalization Aid with the loss of Adjustment Aid, when they are separate phenomena.

Based on recent legislation, Lakewood’s equalization aid will disappear next year or the year after and will not be offset by any State-aid advances.

The judge is correct here:

In 2020-21, Lakewood's Tax Levy-LFS gap is $28.7 million.   If Lakewood received an exemption from the tax cap, it could considerably mitigate its budget problems, although even an additional $28.7 million would not be sufficient, hence, Lakewood merits additional state aid.
(Lakewood's Local Fair Share would be only a 1.1% if it had to pay it.  This is below NJ's 2021-22 average ($131 million out of $12 billion)).

(The cause of the fall in LFS is reductions in LFS multipliers.)

I think the Administrative Law Judge is right to look at Lakewood's strong tax base and recommend a more comprehensive solution than simply ordering more state aid, but in not knowing that Lakewood was already ineligible for Equalization Aid and conflating the disappearance of Lakewood's Equalization Aid with the phase-out of Adjustment Aid, Judge Scalora reveals gaps in state aid knowledge that are not fitting to a major state aid decision maker.
Lakewood, uniquely, can make a strong case that SFRA does not give it sufficient state aid although by not appealing for tax cap liberalization in addition to state aid it weakens its case for either.
StateAidGuy at 7:12 PM
Share