How SFRA Fails the Middle Class (and How to Fix It)


This post will examine an important flaw in SFRA that has been underaddressed since SFRA was written in 2007-08, which is that that SFRA does not differentiate between middle-class districts and rich districts in that it directs the same amount of money to both New Jersey's richest districts and districts who are merely middle-class.

The inspiration for this post is Brick's complaint in the face of the loss of Adjustment Aid, which is that SFRA sees it as a "wealthy district." 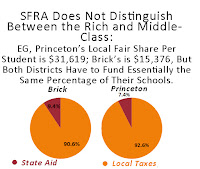 Although Brick has said a lot of things about SFRA that are factually incorrect or are insultingly devoid of context, at least that one complaint that SFRA sees Brick as rich is correct.

The most important stream of state aid in SFRA is Equalization Aid, which is intended to "equalize" the budgets of low-income districts with wealthy districts.

The formula for Equalization Aid is: 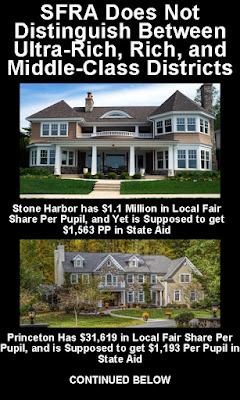 In all, 44% of districts in New Jersey have  Local Fair Shares that exceed their Adequacy Budgets and so get $0 in Equalization Aid.

Due to the existence of the three Categorical Aids, the minimum amount of state aid a district is supposed to receive is around $1,000 per student, with Fair Haven at the absolute bottom for its aid target, at $953 per student. 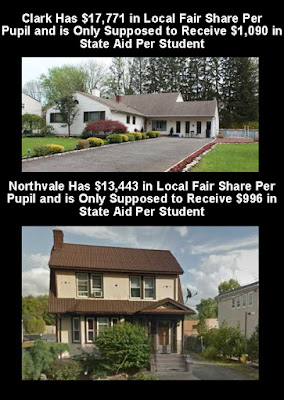 Those other districts that Brick is comparing itself to currently get less state aid than SFRA says they should get, therefore they are getting small increases over the next six years, whereas Brick is getting a cut.

Due to how these aid streams depend on factors that are only loosely correlated with district wealth, oftentimes a richer district will be due for more state aid than a poorer district.


For instance, Avalon has $1.7 million in Local Fair Share per student and has no need for even a cent of state aid, and yet it is supposed to receive $2,041 per student.

In order to demonstrate how SFRA directs the same amount of state aid to New Jersey's wealthiest and middle-class districts, the following is a list of the 50 richest and 50 most-middle- districts who are not eligible for Equalization Aid, what their State Aid Targets are, and how much aid they are due under the Categorical Aids.

So Brick has a valid complaint. SFRA _does_ see it as a rich district, since it is only owed $1,516 per student, which is not essentially different from what much richer districts are getting, like Spring Lake getting $1,411 per student, Mendham getting $1563 per student, Colts Neck getting $1836 per student.

My preferred solution to NJ's school funding and tax problems is to have countywide school property taxes that would then be distributed to districts on a strictly equal-funding-per-student basis.  I believe that this would foster equity in taxation and require all districts, from ultra-high tax base Jersey Shore microdistricts to affluent suburbs to the Abbotts to should equal burdens for education.

Having a countywide school tax would eliminate the cost escalation that comes from the "Millburn-Princeton Effect," where districts compete against each other and therefore drive school spending ever higher.

I'm not naive, I realize this is an impossibility.

(see "Two Cheers for County Taxes!" and "How Maryland Does It")

Working Within the Fragmented System We Have

Working within New Jersey's byzantine system of local-state school funding, the first thing New Jersey could do to direct more state aid to middle-class districts is to change the multipliers in the formula for Local Fair Share so that the product of the formula will be lower.

This is the current 2018-19 version of the Local Fair Share formula:

The Local Fair Share formula basically means that the state expects a school district to pay property taxes equal to 0.69% of its Equalized Valuation plus 2.3% of its Aggregate Income.

New Jersey's total Local Fair Share for 2018-19 was $17.2 billion.  The statewide Equalized Valuation for the pre-budget year was $1.24 trillion, so the formula produces an average tax rate of 1.38%.

In no other state would a 1.38% school tax rate be considered "fair."

So, any measure to direct more state aid to middle-class districts would lower the Equalized Valuation multiplier and the District Income multiplier so that the product of the formula is lower.  If the weights were lowered by 30% each, New Jersey's expected school property tax rate would become 1%.

This step would also direct additional state aid to low-income districts because their Local Fair Shares would fall as well.  For instance, Newark's Local Fair Share would fall from $186 million to $132 million, which would coincidentally align with Newark's real school tax levy of $132.9 million.

The question for New Jersey would then become "how do we pay for lowering Local Fair Share?" since if districts are relieved of the obligation to pay a 1.38% school tax rate, the state would have to step in and replace that lost money.

I can think of several "pay fors."
1.  Eliminate all state aid, including TPAF payments, for districts whose Local Fair Shares exceed their Adequacy Budget by some percentage.

I cannot estimate how much money this would save, since it would depend on an arbitrary cutoff point, but the amount would be substantial if it also included TPAF money and Social Security money.

If New Jersey reconsidered providing "free" PreK to three year olds it would save hundreds of millions.

4.  Lower the At-Risk Weights for High-FRL Districts
Finally, I would change the formula for calculating an Adequacy Budget so that it produces a lower Adequecy Budget for high-FRL districts.

This will require some additional explanation.

"Linear weighting" would pay out extra state aid if a district has more at-risk students, but not increase the weighting as the at-risk concentration increases, would save tens of millions of dollars too.  (see page 92 for more explanation)

NJ Needs to Redistribute Adjustment Aid, but SFRA is Not a Middle-Class Friendly Law

The point of this blog is to argue that Adjustment Aid must be redistributed and every district should have 100% of what our school funding law recommends.  If Justice is "Equal Treatment Under Law," then NJ's status quo is indefensibly unjust when the law applies differently to different districts based on historical enrollment, historical tax base, or inclusion in the Abbott lawsuits.

But that being said, the core formulas of SFRA itself are not above criticism and changing the calculation of Local Fair Share and Adequacy Budget can help relieve New Jersey's middle class squeeze.


Since the beginning of Steve Sweeney's efforts to redistribute Adjustment Aid, Toms River and Brick have been two of the most vocal opponents of reform.

The two districts have launched petitions for their Adjustment Aid, initiated lobbying, and now commenced a lawsuit, for which Brick's BOE has already authorized $10,000 and Toms River has authorized $5,000.


The day of reckoning we have been describing for the last four years is here," [Toms River] Superintendent David M. Healy said. "This year’s state aid losses as well as the future projections will unequivocally devastate this school district in terms of programs, services, staff, class sizes, property taxes, facilities and our ability to provide a thorough and efficient education to our children."

"Why is a kid in another district worth more than a kid here in Brick Township?" Brick Mayor John G. Ducey said Tuesday. "They're not. Every kid should be equally funded. It's just a total abomination of our constitution here in New Jersey."


This blog post will look at Brick and Toms Rivers' tax capacity, loss of enrollment, and then pivot to agreeing with Brick that SFRA itself is not fair to middle-income districts in New Jersey.

Despite the aid cuts of 2018-19, Brick and Toms River are substantially advantaged by the state aid status quo. 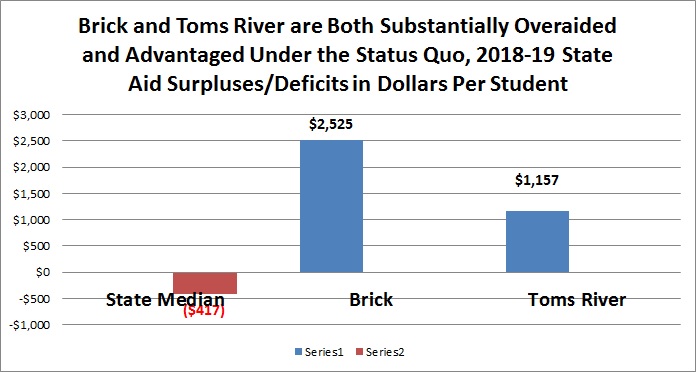 The deficit for the underaided districts is $1.75 billion.

First, Brick and Toms River both have school tax rates that are much lower than the state average.

The median district in NJ pays 98.5% of its Local Fair Share. 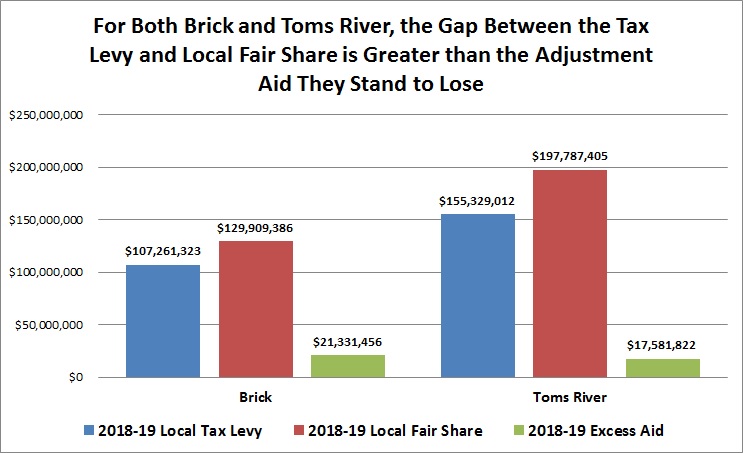 Again, the amount of state aid that Brick and Toms River are projected to lose over the next six years is not even equal to the deficit in each district's tax capacity. 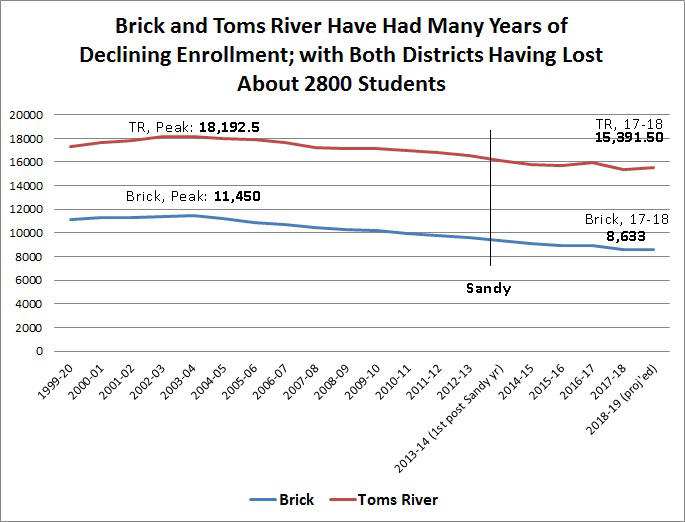 There's no denying that Brick and Toms River have lost tax base over the last few years, in part by Hurricane Sandy.   From 2008 to 2018, Brick lost 17% of its Equalized Valuation and Toms River lost 10%, compared to the state's average loss of only 6.6%.

HOWEVER, SFRA compensates Brick and Toms River for the loss of tax base, since as a district's Equalized Valuation and Aggregate Income shrink, so does its Local Fair Share.  As Local Fair Share decreases, Equalization Aid increases.

Brick and Toms Rivers' boards of education may decide that their communities do not need to handle paying the state's 1.3% average tax rate, but they have the option of cutting costs.

I do not think that consolidating schools is easy, but it is a prospect in large swathes of New Jersey and at some point it becomes a necessity.

Here Brick and Toms River are actually advantaged because they are very large school districts with 12 and 18 schools, respectively.

Brick is Right About One Big Thing about SFRA

Although I strongly support the redistribution of Adjustment Aid and I believe that Brick and Toms River are in denial about their ability to pay higher local taxes and even consolidate schools, I am in agreement with Brick that SFRA sees Brick as a "wealthy district" when in actuality it is merely middle-income.

"Under the formula, Brick Township is considered a wealthy district."

I'll compare Brick to Princeton, since Brick has complained about Princeton gaining state aid while it
loses state aid, although Princeton is not even close to being NJ's wealthiest district (which is Avalon).

Although Brick's $1,516 state aid target might be 27% higher than Princeton's in percentage terms, it is only dollars per student that is budgetarily meaningful. 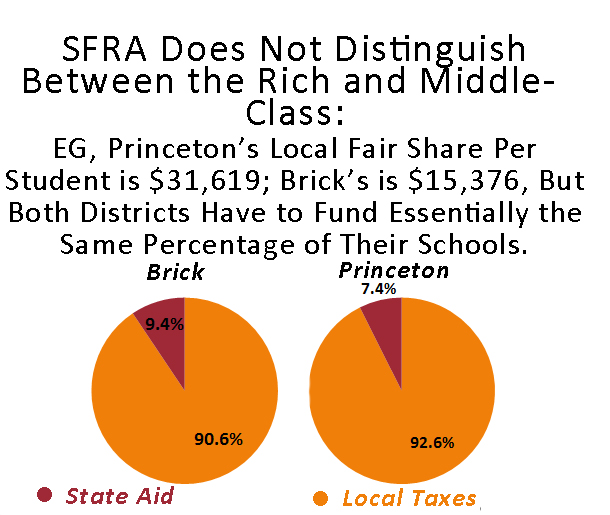 I will write a future post on making NJ school funding fairer to middle-class districts.

The Bottom Line is that NJ Can't Afford Adjustment Aid

Brick and Toms River aren't wealthy enough to just shrug off the loss of Adjustment Aid, but the bottom line is that they can afford to pay the same tax rates that other non-wealthy towns pay.  I acknowledge that it will be damaging to pay more in taxes, but Brick and Toms Rivers' taxes are artificially low due to the involuntary generosity of taxpayers in the rest of New Jersey.  It would be nice if NJ had a state aid law that helped middle-income districts, but given that we don't, it's inherently unfair to treat some middle-class districts differently than other middle-class districts.

NJ does not have a budgetary choice but to redistribute state aid.  For 2018-19, the state aid deficit for the 370 underaided districts was $1.74 billion and that continually grows.

Although 2018-19 Adjustment Aid was technically $652 million, at least $50 million of that is already roped off from redistribution because it goes to vo-techs or districts with very high municipal taxes.

Given NJ's intensifying needs to fund teacher pensions, post-retirement medical, and other debts, the state cannot create equity in K-12 school funding by increasing state aid alone and redistribution has to be part of the solution.

Redistributing state aid does mean some districts must lose state aid, but these districts will only be reduced to 100% of their recommended funding.  When NJ has 370 districts who are currently given less than 100% funding, I have a hard time seeing the unfairness of that.


Posted by StateAidGuy at 6:28 PM No comments: