Steve Fulop and the Jersey City Gang are at it again.   This time they've declared the area around City Hall to be "blighted" so that they can give an apartment complex to be built there a tax abatement and continue to exploit New Jersey's tax abatement law to hide Jersey City's real wealth from the rest of Hudson County and the State of New Jersey.

The way this works is that New Jersey's law on tax abatements, also known as PILOTs, functions like a tax evasion/municipal welfare fraud partnership between a developer and a city. The developer benefits because the PILOT payments to the city are less than the full taxes to the city, school district, and county would be. The municipality benefits because the payments to the city itself are higher than its share of what regular local taxes would be. The city further benefits because the PILOTed building is "invisible" to New Jersey's formulas for municipal and school aid, thereby continuing an enhanced level of aid based on a artificially low Equalized Valuation.

But Jersey City is completely different. Can you imagine the Mayor of Paterson saying the same thing about Paterson that Steve Fulop says about Jersey City?

"We couldn't be more proud of the growth of Jersey City. The fact that residents fill these buildings up as soon as we build them speaks to the demand of Jersey City."

Jersey City only pays 19% of its public school costs, with the state picking up 75% of the tab. Can you imagine a town where the residents paid for the majority of public education PILOTing a third of its property valuation like Jersey City has?

And that's why Jersey City's latest scheme to declare the area around City Hall to be "blighted" is so outrageous.

Jersey City's City Hall is three blocks from the Grove Street PATH Station. The area has some bad architecture, but it is not "blighted."  Zillow lists rents for the area for three-bedrooms at $4,500 per month to $8,500 per month. Even a studio is $1,400. A three story townhouse on Wayne Street whose owner admits needs a "complete renovation" is listed at $1.7 million.

A group of Jersey City residents is standing up to this craziness and suing Jersey City, the Jersey City City Council, and the planning board to stop the blight designation.


"The idea that City Hall and an adjacent parking lot constitute urban blight is preposterous," said [Esther] Wintner. "This is prime real estate." ...

The eight-page lawsuit, filed in August in Hudson County Superior Court, aims to void the July council measure adopting the plan. The suit cites state law governing redevelopment plans that requires buildings must be so "substandard, unsafe, unsanitary, dilapidated or obsolescent ... as to be conducive to unwholesome living or working conditions."

There is no evidence any of the properties in the redevelopment plan meet these criteria, CivicJC says in its lawsuit, which names Jersey City, the council and the planning board as defendants.

I've written before about how Jersey City's PILOTs are bad for Hudson County and the state as a whole, but they are also bad for Jersey City itself. 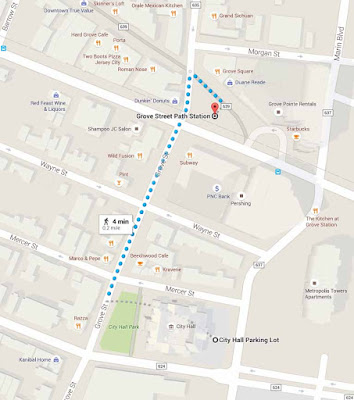 What everyone in Jersey City needs to know is that Jersey City is not going to get any additional K-12 state aid for years, perhaps decades.  For most districts flat-funding is due to the state's budget crisis and Chris Christie's indifference to progressive aid, but if Chris Christie decided to follow New Jersey's funding law Jersey City would not gain any money.

The reason Jersey City gets $418,471,290 is because of "Adjustment Aid," a provision in SFRA that prevents any district from losing aid even if SFRA indicates it needs less. Basically, Jersey City's aid is therefore made up of about $304 million in "formula aid" and then $114,452,158 in "Adjustment Aid."

Jersey City will thus be "flat funded" indefinitely and as the expenses for Jersey City's schools increase over time those expenses will have to be paid for by Jersey City residents, not state taxpayers.


This flat-aid future will create tax problems for the Jersey City Public Schools.  If the Jersey City Public Schools need to increase their budget by 2% a year (about $10 million) to avoid budget cuts they would have to get all that money from local taxpayers.  Since Jersey City's Local Tax Levy is only $114 million, this would require proportionally very large tax increases of Jersey City taxpayers.  In fact, the tax increases necessary to sustain the JCPS budget are well above New Jersey's tax cap law, meaning that eventually the Board of Education would have to ask the voters to approve a larger tax increase.

Also, although SFRA promises Jersey City $418 million per year for many years, SFRA has not been followed and will not be followed in the future due to the Pension Crisis and the inevitability of another economic downturn. When the state encounters deep budget problems again it may cut all districts' aid, including Jersey City's.  Alternatively, as underaided districts make forceful moral arguments for more state aid the state could redistribute some of Jersey City's aid to very poor, very underaided districts like Dover, Freehold Boro, Bound Brook, Prospect Park, Clifton and the the more litigious but less underaided Bacon districts.

Even if the legislature continues to allow Jersey City's aid hoarding, this means that Jersey City's best hope with state aid is flat funding and it must brace for school tax increases.

Jersey City's non-PILOTed tax base is over $20 billion and could economically sustain $10 million a year tax increases, but politically, increases of this size will be difficult.  When one-third of Jersey City's valuation is PILOTed and does not pay school taxes, resentment from the two-thirds of taxpayers who do pay school taxes is possible.

Unfortunately Steve Fulop shows no signs of respecting criticism of his city's overPILOTing or worries Jersey City's flat-funded state aid future.  His PR staff responds to criticisms of overPILOTing by insulting the people making the criticism. His staff interprets the lawsuit over the City Hall blight designation as a "politically motivated move from Wintner, who ran unsuccessfully against a Fulop candidate in the Ward B City Council race in 2013."  His staff insulted Assemblyman Jack Ciartarelli, who also challenged the fairness of Jersey City's PILOTs "we are excited that after 25 years in elected office, Ciattarelli finally decided to speak up on an issue. We look forward to hearing about his next policy stance in the year 2040 as directed by a new generation of Republican officials.” His staff called Sen. Mike Doherty "creepy" for questioning the fairness of Steve Fulop himself paying only $7,700 in property taxes on a townhouse with a market value of $845,000.

Posted by StateAidGuy at 6:38 PM