The Education Law Center has just released a policy brief on Adjustment Aid that attempts to defend this aid stream, clear up what it believes are misconceptions about Adjustment Aid, and assert the Department of Education of miscalculating Adjustment Aid.

I will use the Education Law Center's own summary of what Adjustment Aid is:

What is adjustment aid?

Adjustment aid was intended to steadily decrease over time. Districts receiving adjustment aid would be flat-funded until their adequacy budgets – the amount of resources determined to be necessary to provide a “thorough and efficient” education under the new formula – grew to the point where equalization aid, which is the wealth-equalized state portion of the adequacy budget, and other SFRA categorical aids replaced the “excess” adjustment aid.


In other words, if a district received $20 million before SFRA became law and SFRA's new aid formulas indicate it demographically and economically needs $18 million, that district would get $18 million in formula aid and then $2 million in "Adjustment Aid."

What the Education Law Center didn't point out is that Adjustment Aid ensured that SFRA was not a redistribution of state aid, since Adjustment Aid made it all-but impossible for a district to lose aid. Underaided districts - usually poor-non-Abbotts - were supposed to gain 10-20% per year in aid under SFRA, but that money had to come from new money for SFRA, not a redistribution from overaided districts.

This reliance on new money is SFRA's fatal flaw.  New money is the air SFRA breathes.  Without new revenue SFRA is a fantasy, not a real, operating law.  Since Christie's becoming governor in 2010, there has been no new money poured into SFRA and SFRA's promise to underaided poor districts like Belleville, Clifton, Freehold Boro, and Woodlynne has been empty.

What is strange about the Education Law Center's defense of Adjustment Aid is that their new report actually contains a lot of damning information about Adjustment Aid.

The Education Law Center's own report discloses and then ignores the anti-progressive tendencies in Adjustment Aid. 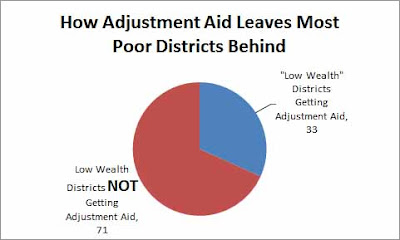 Jersey City is the most important exception.  Jersey City is in DFG B, so it would count as a "low wealth" district in the Education Law Center's classification, but Jersey City's Local Fair Share is $336 million for 2015-16, about $10,000 a student, which is at the state's average  Partly because of the $114 million Jersey City gets in Adjustment Aid, it could enjoy a tax levy at $110 million for 2014-15, an amount below what much smaller cities like Clifton and West Orange must pay.

Likewise, there are many Adjustment Aid districts at the Jersey Shore with low or middle DFG classifications that have high levels of taxable wealth.  Upper Township is in DFG B, but it has $19,000 in Local Fair Share per student, an amount higher than Montclair's, a district the ELC would label "High Wealth" because it is in DFG I.  Upper Township would get  $5,448,392 in Adjustment Aid even in the ELC's alternative calculations.

Then there is Hoboken, which appears in everything ridiculous in New Jersey's aid distribution.

Hoboken's real Local Fair Share is $186 million  for 2015-16 (an amount far in excess of its Adequacy Budget) for 2,600 students.  That's over $70,000 per student, meaning Hoboken could have an exceptionally high-spending school system without a dime of state aid.  Hoboken is in DFG FG though, so it would appear as a "middle wealth" district in the ELC's classification.

Even under the Education Law Center's alternative calculations for Adjustment Aid Hoboken would receive $3,808,821.  Is any aid stream that feeds so much money to New Jersey's highest-resource district progressive?

Asbury Park would still get $23,420,836 in Adjustment Aid under the ELC's alternative calculations. That divided by Asbury Park's 2351 students is $9,962 per student.  Given that Asbury Park would get over $13,000 a student from other aids, is that extra $9,962 a student really the smartest use of precious state money?  Especially since Asbury Park only taxes itself at one-third of its Local Fair Share?

The inclusion of districts with good property tax bases like Jersey City, Hoboken and Shore districts as "lower wealth" districts makes Adjustment Aid look more progressive than it actually is.  Of the  $237 million going to "low wealth" districts, Jersey City alone gets $110 million.  Of the $216 million going to "former" Abbotts, Jersey City and Hoboken get $114 million.  Since economically Jersey City should not be an Abbott and Hoboken should not be an Abbott either demographically or economically, this just shows what a problem Adjustment Aid really is.  In actuality, a lower percentage of Adjustment Aid goes to truly needy districts than the Education Law Center realizes.

The Education Law Center does make a parallel analysis of districts based on being Above Adequacy or Below Adequacy and, again, concedes that a huge portion of Adjustment Aid goes to districts that are Above Adequacy.


The Education Law Center concedes that $161 million of Adjustment Aid would go to districts that are Above Adequacy in their budgets and below Local Fair Share in their taxes, meaning Adjustment Aid just makes taxes lower for these districts and doesn't really contribute to public schools at all.

In the case of above adequacy districts receiving adjustment aid, about half the aid is allocated to districts that are over their LFS and about half to those below. Again, for those districts that are below their local share, at least some portion of adjustment aid is supporting the adequacy budget by replacing local revenue. About half of the $161 million in adjustment aid to above adequacy and below LFS districts is allocated to low wealth districts. This is expected as lower wealth communities have greater difficulty raising the local revenue required under the SFRA. [my emphasis]

I have to respect the Education Law Center's honesty in reporting information that weakens its argument, but I can't avoid thinking that Adjustment Aid is even less progressive than I earlier thought. I find it bizarre that the Education Law Center would side with well-funded, high-DFG districts like North Hunterdon/Voorhees ($1,569,421) in Adjustment Aid, Voorhees ($2,006,377), Marlboro, ($4,462,309) and Medford ($1,340,885) over struggling districts that get no Adjustment Aid and have gotten no new aid since SFRA.

The Education Law Center is aware of the disparities in New Jersey's aid distribution and knows that Adjustment Aid contributes to these disparities, but counters the demand for help for poor, underaided districts with a glib demand to just get "back on track to full funding of the SFRA."

“The goal of this policy brief is to clear up common misconceptions about hold harmless aid in the SFRA formula. Much of this aid is used to support the adequacy budgets of districts that are unable to, or restricted from, raising those funds themselves,” said Danielle Farrie, ELC Research Director and policy brief co-author. “It’s time to focus on the key task at hand – getting back on track to full funding of the SFRA to make sure all students receive the resources they need and a meaningful opportunity to succeed in school.”  [my emphasis]

There it is.  The Education Law Center's fundamental blindspot about the state budget and taxes.

The Education Law Center exists in an alternative reality where the Great Recession never happened, there is no pension debt, and Atlantic City still has a thriving gambling industry.  It exists in a universe where New Jersey's economy is robust and not a laggard, where no retiree leaves New Jersey due to taxes, and the state has no need to raise taxes to replenish the Transportation Trust Fund. 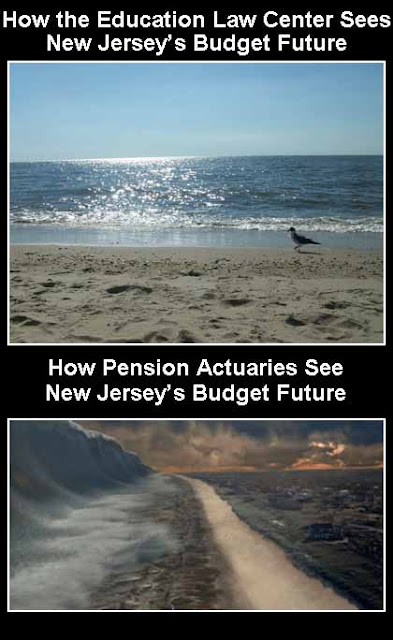 The Education Law Center demands that the state fully fund SFRA but doesn't even acknowledge in that policy brief on Adjustment Aid how much fully funding SFRA would cost, let alone from whom New Jersey would take that money.

The Education Law Center's policy brief on Adjustment Aid takes as a foundational belief that any policy mechanism that delivers any money to poor districts is automatically a good thing.  But even when  Adjustment Aid does succeed in hitting its targets and sending money to poor districts it isn't a smart use of state resources because more often than not it misses it low-resource targets altogether.

Update: A more thorough analysis of how most of the DFG A and B districts the ELC calls "low wealth" are not "low wealth" in terms of tax base per student.

Posted by StateAidGuy at 8:56 AM