Commissioner of Education David Hespe has acknowledged that SFRA cannot be fully funded in the foreseeable future and that the only way to help NJ's most underaided districts is redistribution.

Speaking at the NJSBA's annual meeting in Atlantic City:

State Education Commissioner David Hespe this week gave some of his first comments to date on the status of school funding going into the next budget season, and it was hardly encouraging for districts.

Speaking to school board members and administrators recently at their annual conference in Atlantic City, Hespe acknowledged that state aid has been pretty much stuck at level funding since 2011, following a steep cut in state aid, and not much will change going into 2016.

“The impact of a frozen formula is pretty severe,” Hespe said. “And devoting enough dollars to unfreeze the formula is probably not going to be a possibility.”....

...Hespe said he hoped state officials and school leaders will start talking about state funding now, rather than waiting until the new year – when the die will already have been cast with the announcement of the governor’s budget plan, including district-by-district aid.

“Everybody in this room should engage on this topic,” Hespe said. “There are difficult decisions to be made and, without your input, we’ll probably end up making the wrong ones.”

While the state cannot meet its obligations under the School Funding Reform Act (SFRA), according to Hespe, he acknowledged that some districts are suffering more than others, including districts with fast-rising enrollments or with spending below so-called “adequacy” level....

...Hespe, in a brief interview, said he would like to run the SFRA formula at some level for fiscal 2016 to try to even out the widest disparities.

“We may not be able to do that,” he said. “But I’d like to have these conversations in October, and normally when they start in February, it’s too late.”

He acknowledged that as some districts see increases, others may have to lose aid.

“That is really the bottom line in these conversations,” he said. “These are all conversations we need to be having, and I would rather start them now than in February.”


David Hespe's call for redistribution is long overdue. Everyone who purports to care about New Jersey's poorest districts and poorest students should support this, but the method of redistribution is critically important and, as Hespe's acknowledges, the state might end up making "the wrong decisions."

The wrong decision I'm worried about Hespe making is conditioning cuts/increases primarily on being Above or Below Adequacy.

On Tuesday, Hespe told school board members that he is concerned about the growing number of districts that are spending below what the state considers adequate. He said those are the districts where he will focus as the budget is prepared early next year.

Who Should Get the Money?

Answer: The Most Underaided, not necessarily the farthest Below Adequacy


The following districts are the most underaided in NJ and the most deserving of additional resources. Some of these districts are overtaxed, some are undertaxed, but for all of them the state is failing to provide the resources necessary for a "thorough and efficient education."


To bring these districts up to a $4,000 student deficit (which is still terrible underaiding), would cost $137 million.

Technically SFRA caps the amount of aid a district can gain at 20% of its aid from the previous year.  To bring up the most extreme underaided districts up to $4,000 per student deficits would mean making increases above 20%.  I personally would like to see Freehold Boro, Manchester Regional, and Prospect Park get increases above 20%, but I can understand why the DOE cannot do this in one year since if the DOE spreads out the benefits then politically redistribution has an easier time of making it through the legislature. 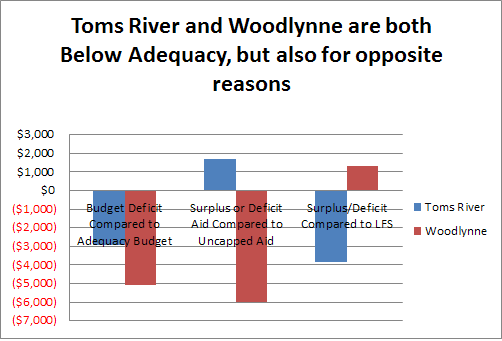 Toms River is an example of a district that is Below Adequacy solely because it does not want to pay taxes.

HOWEVER, Toms River is also overaided. Toms Rivers' Uncapped Aid is $42.7 million, but it gets $68 million, meaning it is overaided by $25.2 million.

Toms Rivers' budgetary problem is that it does not want to tax itself. Toms Rivers' Local Fair Share is $201.6 million but its real tax levy is only $132.2 million.  Its equalized tax rate is in the 0.8-0.9 range (it is different for each component town of the regional district.)

Woodlynne is also Below Adequacy but because it is underaided.

This underfunding is solely due to the state's failure to give aid to Woodlynne. Woodlynne's aid is only $6.9 million versus a SFRA-calculated need of $10.3 million.

Woodlynne's Local Fair Share is only $1.4 million, but its tax levy is $2.1 million (on a
3.7758 equalized tax rate), meaning that Woodlynne is badly overtaxed.

Although assessing responsibility for a district being underfunded can become complicated, the solution is simple:

Who Should Lose Money?

SFRA does not allow a district to receive less than 102% of what it received in 2007-08.  Most districts in NJ receive less than that amount, but there are a handful that receive more than they got in 2007-08 and are still overaided and can thus lose money even in accordance with SFRA.

According to the Alternative Aid Scenarios released by the DOE, these are the districts that can lose money and the amount they can lose without making any decision that contradicts SFRA:


The huge problem here is that these cuts are very small.  The cuts allowed by SFRA only add up to $7.3 million, a tiny amount that is barely enough to bring Freehold Boro up to a $4,000 deficit.

The DOE will thus have to go against SFRA's provision to keep every district at 102% of 2007-08 funding and make real cuts.

Short Answer: The Most Overaided


How much money can be freed up?

The 23 most overaided districts alone get $210 million more than SFRA recommends, although more than half of that amount is in Jersey City alone.


Taking away all of the excess from these districts would be too destabilizing, but clearly, there are large amounts of money available in overaided districts.

To take state aid away from districts that may be underaided, but are are Above Adequacy because they accept high taxes, would be completely unfair and would punish districts for doing the right thing. 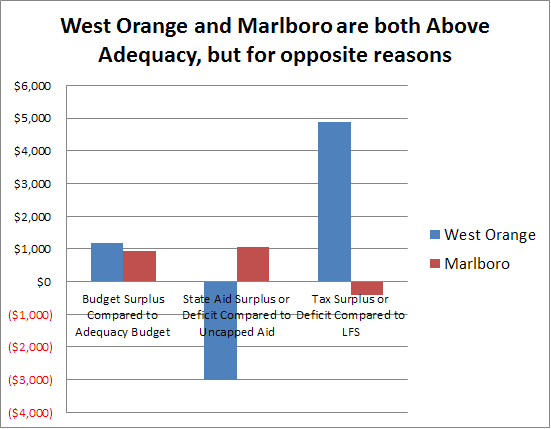 West Orange is Above Adequacy because it pays extremely high taxes.

Many districts would reluctantly tolerate underfunded schools, but West Orange has done the generous thing and accepted extremely high taxes (for 2015-16 WO has a 2.2696 equalized tax rate)

West Orange's Local Fair Share should only be $97.5 million, but its actual local tax levy is $125 million and that excess is why West Orange's schools are Above Adequacy.

To take aid away from West Orange because it is Above Adequacy would be to punish West Orange for doing the right thing for so many years and to probably add to what is already an excruciating tax burden.

On the other hand, there are some districts that are Above Adequacy because they are overaided.  In many cases, these districts are also undertaxed.

Marlboro is Above Adequacy because it is overaided.

Because it gets so much state aid, Marlboro can have low taxes (0.4732) and tax itself $13 million below its Local Fair Share (a $417 per student deficit).

Again, let me repeat my simple solution: take money away from districts that are the most overaided in per pupil terms.

A Problem is the Tax Cap

A problem that the DOE and districts will have is that the 2010 tax cap law assumed that state aid would always increase and does not provide an automatic adjustment to the tax cap for aid loss like it allows for population growth, debt service, and health care.  Thus, if Jersey City lost $33 million it could not increase taxes by that amount unless it got an affirmative vote from its electorate the following November.

Since Jersey City's Local Tax Levy for 2015-16 is only $114 million, a 2% tax increase for Jersey City is only $2.8 million, a minute fraction of the amount of aid Jersey City, unfortunately, needs to lose.

A solution to this could be to amend the tax cap law so that there is an automatic adjustment for lost aid.

Taking money away from any district will be very difficult.  Most aid-losing districts will not be able to avoid cuts.  Many have entrenched very expensive salaries for staff.  Some have kept under enrolled schools open that less-well aided districts would have closed.  Many more have electorates that have become accustomed to very low taxes.

Many of the most overaided districts - especially ones at the Jersey Shore - are not conventionally affluent and may not comprehend why they have to lose aid.  Hoboken, NJ's richest K-12 district, is convinced that it is poor because its students are largely poor and sees itself victimized because it has charter school expenses.  Objectively, cutting Hoboken's aid will be a no-brainer for everyone except the Hoboken BOE but a risk comes from the the Hoboken BOE's exceptional media power and shameless whining.

Weymouth is overaided by over $4,000 a student, and yet it displays a non-comprehension of the state at large:

Joy Nixon, school business administrator in rural Weymouth Township, which currently spends above adequacy, said they have lost some enrollment, which drives up their per-student spending figure. But, she said, fixed costs have not gone down proportionally — and in fact keep going up.


This is not a ferocious defense of overaiding, but Weymouth should consider how badly aided and funded other districts are.

Yet districts cannot see themselves in isolation.  if NJ is going to have a unitary funding formula that is not a joke, Shore districts, some exurbs, and some gentrified cities need to lose money.

I want to praise Stephen Sweeney in this for having the political courage to take this issue on and for citing overaiding.


State Senate President Stephen Sweeney, D-Gloucester, Salem, Cumberland, said conversations have already begun, but he said not everyone will be happy with changes.

"There are some districts that get more money than they are entitled to," he said. "We are going to have pretty serious discussions, and a lot of people won't like it."

Sweeney also says the state needs to review the Abbotts:


Because of the political difficulty of cutting aid, progressives should put aside their differences with the Christie Administration and support it when it tries to help NJ's neediest districts.