The Clifton Board of Education is stepping up its campaign for an equitable and rational distribution of state aid.

Every district in New Jersey probably thinks it deserves more state aid than it is getting, but Clifton actually is among New Jersey's most underaided districts.


Clifton, whose students are 56%​ FRL-eligible and 5% ELL, only spends $11,837 per student, which is more than $3,000 a student below the state's average even though Clifton's needs are higher than average.* In every single spending category Clifton is among the lowest spending districts in its size peer group. For textbook purchases and maintenance of facilities, Clifton was in last place in its peer group.

Clifton receives $0 in state money for Pre-K, although it is receiving (for the first time this year), $3 million in federal money for Pre-K (committed for the next four years). Clifton, a district of over 11,000 students, probably has almost as many 3 and 4 year olds who are FRL-eligible as Hoboken has FRL-eligible students across K-12 and yet Hoboken receives $10.6 million in state money for "free" Pre-K whereas Clifton receives nothing.

Clifton, unlike many other districts that demand more money from the state, already pays above-average school taxes. The average district in New Jersey pays only 80% of its Local Fair Share, but Clifton pays 90% of its Local Fair Share.  Clifton's 2015-6 Local Tax Levy will be $125,842,752, a figure higher than Newark's or Jersey City's even though Newark and Jersey City have much larger tax bases. 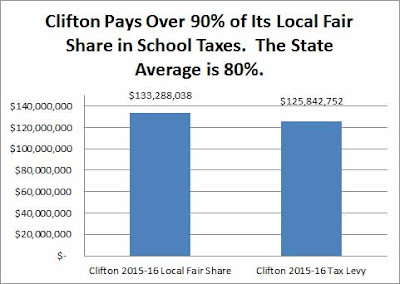 What makes Clifton unique among NJ's severely underaided districts is that it is fighting hard for fairness and demanding to know how some districts get more than SFRA recommends while many more get less.

Clifton's BOE, like many BOEs statewide, knew that SFRA was underfunded but assumed its underfunding was prorated with the state's abilities. When Clifton found out that the percentage of aid received by different districts in NJ was wildly uneven, with 200 districts get over 100% of their uncapped aid while over 100 get not even 50% of their uncapped aid, it passed a resolution condemning this at its June meeting and demanding an explanation from the State Department of Education.


Again, many BOEs ask for more money, but referring to the wide and unfair variation in the percentage of uncapped aid received is unusual.

The State responded to Clifton a few months later. The State, responding through Passaic County Superintendent of Schools Robert Davis, responded that Clifton's aid had grown since SFRA more rapidly than its student population and therefore Clifton should be glad since it wasn't doing as badly as it was before.


Our review of the Clifton school district’s history shows the district’s state aid allocations increased dramatically under SFRA. According to the data, Clifton is currently receiving about $7 million (37%) more in state aid than it received prior to the implementation of SFRA. Meanwhile, enrollment increased by only 3% (350 students) This represents a tenfold increase in funding growth relative to enrollment growth since FY2008. ..


In other words, "Be Glad Clifton, for you are less victimized than you were before."

(Clifton only got more money in SFRA's first year.)

The County Superintendent explained Clifton's underaiding and the overaiding of other districts by referring to SFRA's aid caps and provision of Adjustment Aid.


As you know, the SFRA included provisions to phase-in districts to full funding under the new formula. The statutory phase-in limits aid increases for districts to 10% or 20% of prior year aid and holds districts harmless at FY2009 State aid levels through Adjustment Aid.

This is an important point because it underscores how SFRA was only intended as a method of distributing new state aid and was intentionally not a redistribution of the existing aid package. Without billions in new money to pour into education, "SFRA does not breathe" and the old, unfair aid package is preserved. 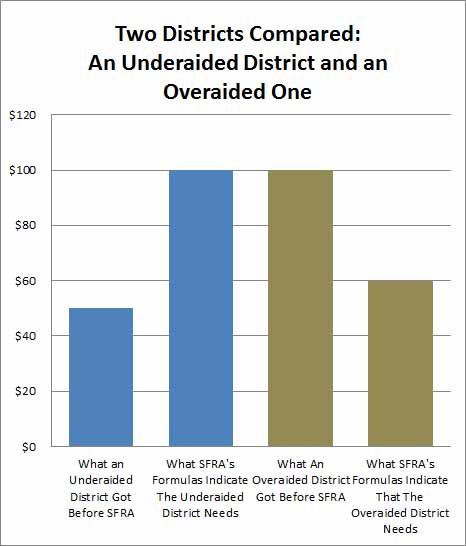 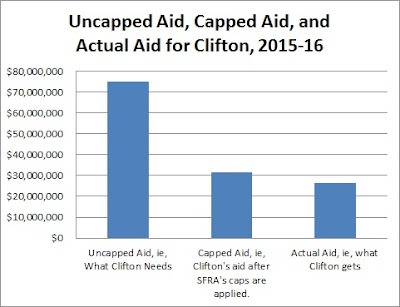 Here's the catch for the underaided district:

SFRA was supposed to be phased in over a few years and the underaided District's aid increase is capped at 10% or 20% of what it got the year before.  Therefore under a best-case scenario (which didn't happen in reality), a district that only gets 50% of its uncapped aid would have to wait four years to get its full uncapped aid. 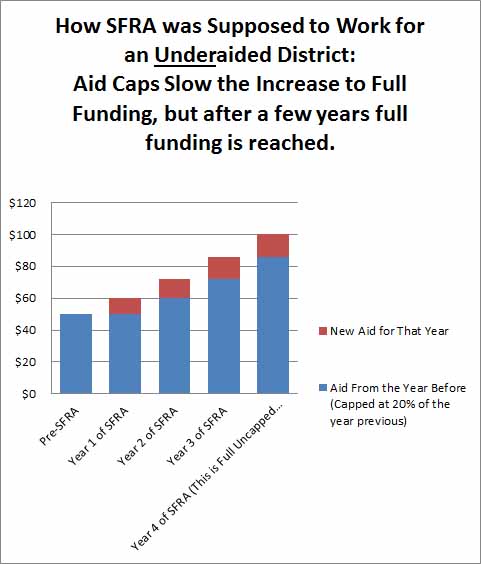 For the overaided district, which could be Marlboro or Jersey City or Asbury Park SFRA "holds harmless" the district 102% of what it got in the year prior to SFRA's adoption.

Under SFRA, this overaided district would automatically get whatever is recommended from Equalization Aid, Security Aid, Transportation Aid, and Special Ed Aid BUT with Adjustment Aid coming in to make up the gap between the formula aids and what the district got before. 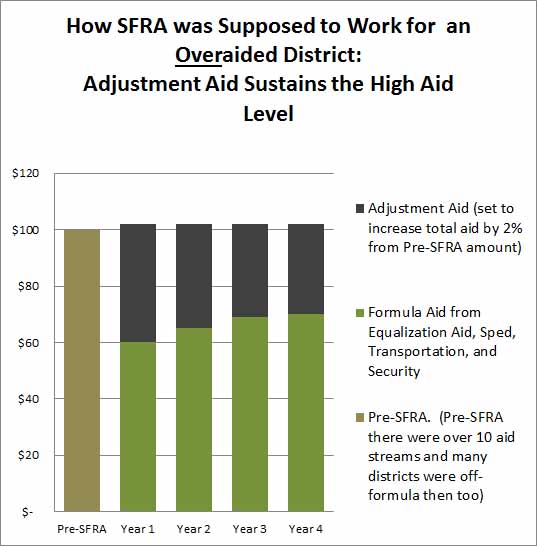 A district like this would be flat-funded until its recommended formula aid exceeds what it got pre-SFRA, but if the district became wealthier its Equalization Aid would drop so much that it might be flat-funded indefinitely.

SFRA was signed at NJ's revenue peak.  Since 2008 we have had a financial crisis, the Great Recession, a Pension Crisis, the collapse of Atlantic City and a governor who doesn't understand state aid in the first place or care about progressivity.  Thus, SFRA is ignored and should be considered Utopian Fantasy and not a real, operating law. 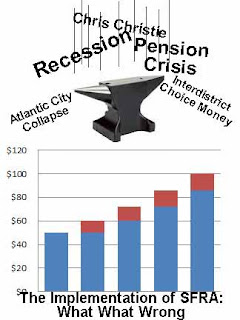 Due to Chris Christie's indifference to progressive aid and the fact that the rest of the governing class also opposes letting any district lose aid, a district like Clifton is trapped at the old, unfair aid level that SFRA was supposed to end.

The basic problem with SFRA Remains:

How much longer can the state allow an aid distribution to persist which exacerbates inequalities and victimizes kids in towns like Clifton who are not rich enough to raise enough local revenue and not poor and/or aggressive enough to seize new state aid through a Supreme Court lawsuit?

*not counting pensions and FICA.
Posted by StateAidGuy at 9:26 AM