The Misguidedness of the Bacon Lawsuit

The Bacon lawsuit is a case by sixteen poor, mostly South Jersey school against the State of New Jersey who seek the same privileges that the Abbott districts have.

The Education Law Center represents the Bacon districts.  It gives this overview of the Bacon case:

Bacon v. NJ Department of Education is a long-running case involving 16 poor, rural districts, many of them located in the southern portion of the state. Since 1997, these districts have demanded adequate resources to meet the needs of student populations characterized by intense poverty, high mobility rates and other challenges associated with high needs schools.

In 2008, the Appellate Court affirmed a State Board of Education determination that the Bacon districts were unable to provide a thorough and efficient education for their students under the current school funding formula. After introduction of the School Funding Reform Act (SFRA), also in 2008, the NJ Department of Education determined that the new school aid formula would provide the Bacon districts with the resources they required. The SFRA would also entitle these districts to the high quality Abbott preschool program for all three- and four-year-olds.\

Initially, the Bacon districts received increased funding under the SFRA, but massive underfunding of the formula eliminated these increases. In addition, preschool expansion under the SFRA was never implemented. As a result, the districts determined that further action was necessary and sent a letter to the NJ Attorney General in July 2014, demanding full SFRA funding and implementation of high quality preschool.
In 2008, ELC filed an amicus brief in support of the 16 poor rural districts. ELC currently represents parent and student plaintiffs in this case.

The problem with the Bacon case is that these districts are not even remotely the most underaided in New Jersey, not by any measure of underaiding.  The Bacon districts are NOT rural versions of the Abbotts at all.

First , the Bacons are not nearly as poor demographically: 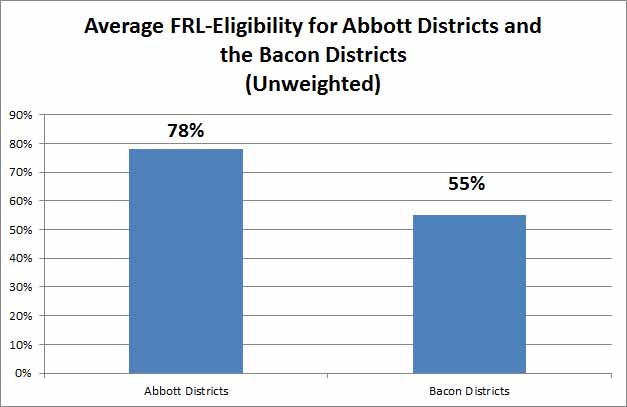 Second, the Bacons are not as poor in terms of tax base. 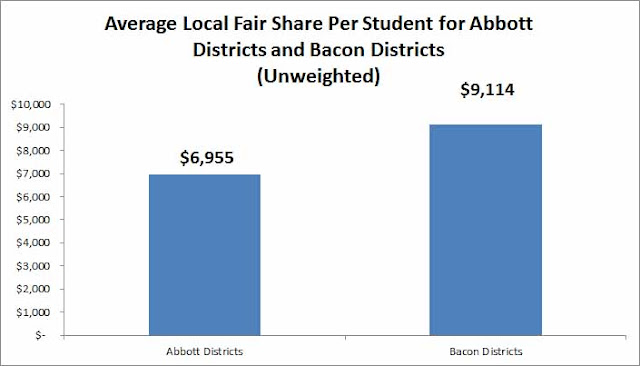 The point isn't that the Bacons shouldn't get more aid in an ideal world, but there are at least NINETEEN districts that are more underaided than the most underaided Bacon (Hammonton)

The Bacons themselves are a diverse group.  Yes, a few of them like Lakewood (for which SFRA doesn't work), Hammonton, and Clayton should get more aid, but the rest of them do not have the most acute needs in New Jersey.

Nor do the Bacons have the highest FRL-eligible rates.  The average Bacon districts is 55% FRL-eligible.  That's higher than average, but not high enough to justify extra money for them when where are numerous non-Bacons have even higher FRL-eligible percentages.

If the New Jersey Court system gives the Bacons extra aid it would be rewarding litigiousness over justice.