The Poor Districts Abbott Left Behind

One issue with the Abbott funding regime that I am surprised doesn't arouse more anger among progressives is how there are still so many poor children left behind.


The Abbott lawsuit was waged on behalf of public school children in the poor urban (ie, the Abbotts) districts and only those children. The Supreme Court of New Jersey, in its wisdom, has never decided that poor children in poor districts that were not urban have any of the rights that kids living in identical circumstances in Abbotts have.

Or, as Paul Tractenberg, the founder of the Education Law Center, bluntly said in 1997


"We were focused on poor kids in urban districts. We didn't purport to represent poor kids wherever they happen to be."

Indeed.  The Abbott regime completely leaves behind poor children living outside the Abbott districts. School districts that are just as poor as the Abbotts but not part of the Abbott lawsuit usually get one-quarter or one-third as much state aid and spend drastically less per student. 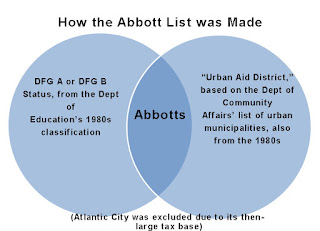 As the Abbott decision has aged and the Abbott list is essentially the same as it was in the early 1980s (no district has been subtracted from the list, although three districts have been added), it more and more diverges from a list of New Jersey's 31 lowest-resource and poorest districts.
Of the 31 districts in New Jersey with the highest percentage of FRL-eligible students, only sixteen are Abbott districts.  Of the 31 poorest districts, the fifteen non-Abbotts get on average $8,422 per student in state aid while the sixteen Abbotts get $15,038, a $6,600 per student difference.  Those fifteen poor non-Abbotts combined get $14 million in Pre-K money, less than just one Abbott, West New York, gets.

If a district has considerable property wealth despite its student poverty than there can be rational reasons for the underaiding.  Indeed, Atlantic City still has about $1.5 million in property wealth per student and its school spending is $20,826 per student.  Seaside Heights likewise has a good tax base and can spend $15,999 per student.

However, Atlantic City, Seaside Heights, and Lawnside are the exceptions and the other highest-poverty non-Abbotts in NJ do not have strong tax bases or adequate aid streams and their school systems suffer.  East Newark's school spending is $9,980 per student despite an 88% FRL-eligibility rate. 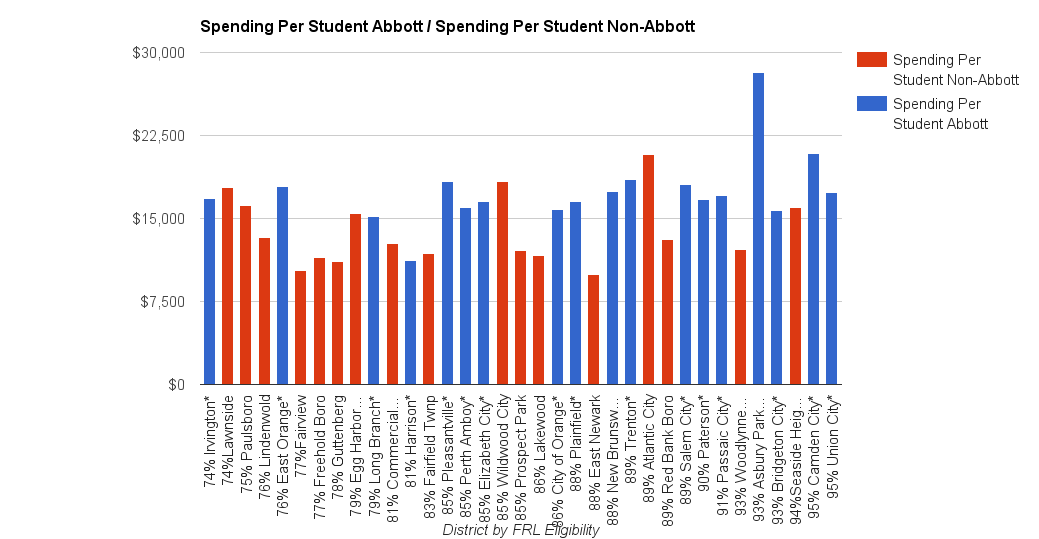 If I factored in facilities money and Pre-K money the Abbott advantage would be even larger.

Posted by StateAidGuy at 4:16 PM