The Need for Shared Control over the Congressional Calendar

In the last 20-30 years everyone who observes American politics has acknowledged that the political system has become more and more combative and chaotic.  First functionality gave way to gridlock, then gridlock became permanent partisan warfare, and then partisan warfare became Constitutional Crisis.

As Washington has become more dysfunctional, two schools of thought have emerged as what the origins of our governing crisis are.

The first school of thought is that dysfunction is due primarily to change in the political culture.  As the two parties have polarized, Congress has simply become more “partisan” than a generation ago and the old bipartisan comity has died.  Newt Gingrich, Dennis Hastert, and Mitch McConnell feature prominently as villains in the Democratic versions of this theory, although Republicans would claim that Democrats aren’t innocent either.

Along with Congressional polarization there is a polarization of the population as a whole.  There has been a geographical clustering of liberals and conservatives, a “Big Sort,” that means liberals and conservatives interact less and less often.  Inequality has worsened and each party is funded by plutocrats.  Americans have abandoned the mainstream media that attempted to be balanced and embraced ideological, and often inaccurate, media whose reporting is selective and which reinforces its audience's preexisting opinions.

The Cultural Theory of Dysfunction is what most politicians themselves embrace, hence George W. Bush ran for president in 2000 as someone who would be a “uniter, not a divider” who could “change the tone.”  Hence, Barack Obama in 2008 ran on a campaign of “hope and change.”

Adherents of this theory say the solution to Washington’s problems is for members of Congress to spend more time together at parties on weekends, for officials to be more civil, and perhaps for state legislatures to use less gerrymandering.

The second school of thought is that America suffers from Constitutional obsolescence, i.e. Constitutional misdesign.  Proponents of this theory would point out that America’s government has far more veto points than a parliamentary system and it is the unwieldy structure of the US government itself that makes passing legislation overly difficult compared to parliamentary systems.

The structuralists would argue that America’s version of presidentialism is even worse than what exists in most other presidential democracies because the Electoral College and Senate malapportionment.  They would say the American system goes beyond protecting minorities from majorities, since the Electoral College, Senate, and Supreme Court often empower a minority to rule over the majority.

They would say that as unwieldy as the original US Constitution is, subsequent generations have multiplied the inefficiency by creating the Senate filibuster and committee-chair vetoes.

Most adherents of the theory of flawed Constitutional design are liberal writers under 40. No elected official proposes comprehensive Constitutional reform, and only a small number of Senators have called to eliminate the filibuster.

The "Cultural Theory" and "Constitutional Misdesign Theory" overlap and anyone can subscribe to both of them, but what I think liberals overlook in blaming Republican leaders like Newt Gingrich and Mitch McConnell personally is that electoral history has proven Newt Gingrich and Mitch McConnell “Scorched Earth” policies to be strategically correct, hence, healing the culture of Washington is very unlikely.

The Republican refusal to cooperate with Bill Clinton and Barack Obama, even on policies some Republicans had previously supported, made Clinton and Obama look ineffective.  Their sharp criticism of Democratic agendas helped to incense conservative voters.  The subsequent demoralization of Democratic voters and energization of Republican ones produced large Congressional gains for the Republicans in 1994 and 2010.  Clinton adopted a semi-conservative agenda for the rest of his presidency and Obama’s legislative agenda was frozen for his last six years. 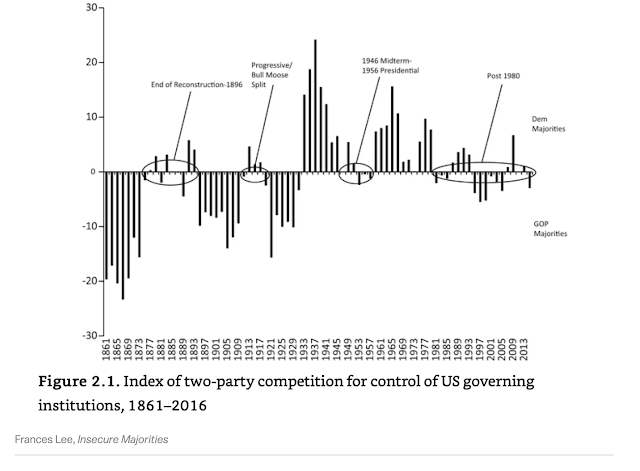 Mitch McConnell has explained his strategy as being organized around a belief that bipartisanship itself convinces Americans that everything is “ok” in Washington and that the president is doing a good job.

“We worked very hard to keep our fingerprints off of these proposals. Because we thought — correctly, I think — that the only way the American people would know that a great debate was going on was if the measures were not bipartisan. When you hang the ‘bipartisan’ tag on something, the perception is that differences have been worked out, and there’s a broad agreement that that’s the way forward.”

Maybe Mitch McConnell is just evil.  Maybe he cares more about Republicans winning than helping needy Kentuckians.  However, the stakes in every Congressional election, every House seat, and every Senate seat are absolutely enormous for each party because having a majority conveys monopoly control over the legislative calendar and produces a stark difference between being empowered and being powerless.

In other words, having 51% of a chamber’s seats gives a party 100% control over that chamber’s legislative calendar.

If the House is controlled 218-217, then the party with 218 members gets to decide what is voted on, and it is very likely that a bill that even has majority support, but not a “majority of the majority,” will be shelved indefinitely.   Although the House has the possibility of a discharge petition, punishment from party leadership is usually enough to deter majority-party members from signing one.

Likewise for the Senate, where having 51 Senators (or 50 plus the vice president) conveys an absolute veto on the other party’s agenda, even if a bill has complete support from the minority party plus enough supporters from the majority party and could easily surpass 60 votes.

American voters, even ones who only passively follow politics, understand the overriding importance of controlling the legislative calendar, hence since the 1980s there has been a decline in cross-party voting, ie, a decline in voters electing Senators and Congress members who come from a different party than their choice for president.

Americans now “vote the party, not the person” and the merits of an individual candidate matter less and less.  In a Red State, a politically moderate Democrat with a compelling life story will struggle; likewise in a Blue State a politically moderate Republican with a compelling life story will struggle as well.  Even scandal-tarred Senators like Roy Blunt of Missouri and Robert Menendez of New Jersey can still win because even if they are personally unpopular, the opposite party is even more unpopular.
The New York Times' endorsement of a hitherto unknown Democrat over the liberal Republican Christopher Shays in 2006 explains how its logic is based on "vote the party, not the person."

Now it is time to draw the line. Mr. Shays may be a beacon of integrity, but if he is re-elected, he will vote to continue House control by a party that has repeatedly sold out the country to special-interest lobbyists....
Mr. Shays has been a good congressman, but not good enough to overcome the fact that his re-election would help empower a party that is long overdue for a shakeup. This decision is painful, but not difficult, given the high caliber of his opponent. With due respect for Mr. Shays’s service, we strongly endorse Diane Farrell [D] for Congress.

Congress members who used to win in states where their own party was less popular, like Southern Democrats and Northeastern Republicans, used to be Congress’s moderates and dealmakers.  Even aside from all the systemic factors disincentivizing bipartisanship in Washington anyway, as voters have eliminated moderates, the members of Congress who are ideologically capable of bipartisanship have nearly disappeared.

And so I have a solution here to the cultural and structural problems of Washington.

Why not have shared control over the House and Senate calendars?  So that if one party has 49% of the seats, it at least gets to determine some percentage of each chamber’s votes.

Shared calendar control would nullify the "Hastert Rule," where a majority party only advances legislation that has the support of the "majority of the majority."  Shared control would eliminate the winner-take-all nature of Congressional elections, where under the status quo even having 49% of the seats renders that party powerless.

Since getting that 218th Congressman or 51st Senator would be less important, the intensity of partisan warfare would diminish.  Voters could rationally vote for moderate candidates from a party whose Congressional leadership they find unappealing.  Since a vote for someone like Heidi Heitkamp would no longer be tantamount to voting for a very liberal Democratic control; nor a vote for Lincoln Chafee be tantamount to a vote for a very conservative Republican control, moderates would find political success again and then Congress would become more functional.

If the minority party’s ideas are ones that only appeal to a minority of Congress, then they will be rejected anyway or filibustered in the Senate (if the filibuster is preserved)  But if a minority party does have some ideas that have majority support (and both parties have some majoritarian ideas), they could pass and a special interest logjam will be broken.

If joint calendar control were combined with a centralizing voting system like Ranked Choice Voting or two-round runoffs, the centripetal forces of politics would be diminished and Congressional functionality would be further improved.

Having joint control would increase the number of bills that members of Congress vote on, but I see no detriment to that since it's a fiction that floor debate has any persuasive importance.
Let's Fix What We Can

The American presidency is inherently winner-take-all, but the Senate and House have 100 and 435 members respectively, and so power can be shared.

I don’t believe that all questions about American politics should be settled by referring to the opinions of the Founding Fathers back in the 18th century, but the absolute control over the legislative calendar by one party’s leadership was not intended by the Founding Fathers.  They thought the American government wouldn’t have any permanent parties (ie, “factions”) at all and that every issue would have a unique coalition of support and opposition.

Having shared control over the legislative calendar would enable the Founders’s coalitional fluidity to exist, eliminate a disincentive for voters to elect moderates, and restore the Constitution to how the Founders actually intended it to work, plus restore to the American people a functional republican government.


This piece is indebted to Frances Lee, author of "Insecure Majorities: Congress and the Perpetual Campaign" and "Sizing Up the Senate: The Unequal Consequences of Equal Representation"
Posted by StateAidGuy at 1:12 PM No comments: