Thanks to the determination of Senate President Steve Sweeney, his legislative allies, and grassroots 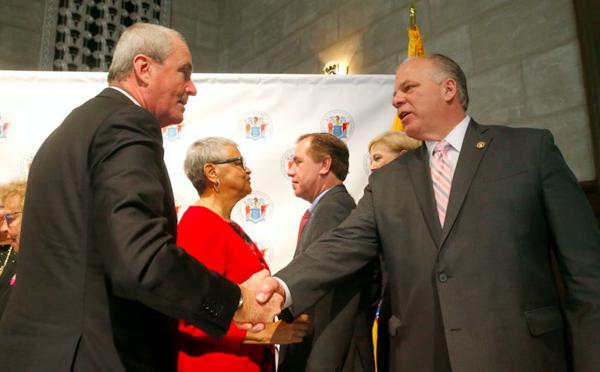 support from parents in underfunded districts, Gov. Phil Murphy agreed to allow a limited redistribution of K-12 state aid to take place and to focus new state aid on NJ's most underaided districts.

The redistribution of $32.1 million of Adjustment Aid combined with the input of $351.4 million in new aid brings NJ $381 million closer to state aid justice, but as we are about to see in this blog post, 100% funding for every district in seven years is likely unachievable.

As usual, I've put all the state aid data referred to here online.

The median district is underaided by $417 per student and receives only 85% of its Uncapped Aid.

The Overaided:
Yet, there are 190 districts receiving over 100% of what the School Funding Reform Act says they actually need.

The reason that excess grew for 2018-19 despite the legislature's $32.1 million cut to Adjustment Aid is because the overaided districts tend to have further enrollment loss and/or tax base growth.  Jersey City alone will be overaided by $20 million more in 2018-19 than in 2017-18, despite its loss of $3.5 million in Adjustment Aid.


In terms of percentages, there are 54 districts getting 200% or more of their recommended aid.  Washington Township in Burlington County is the most overaided in percentage terms, getting 521% of its real aid target.

In terms of percentages, there are 54 districts getting 200% or more of their recommended aid.

The 100%ers:
There are 17 districts getting exactly 100% of what is recommended, the largest of which are Lakewood and Freehold Township.

There are 370 districts getting less than 100% of what SFRA says they need. 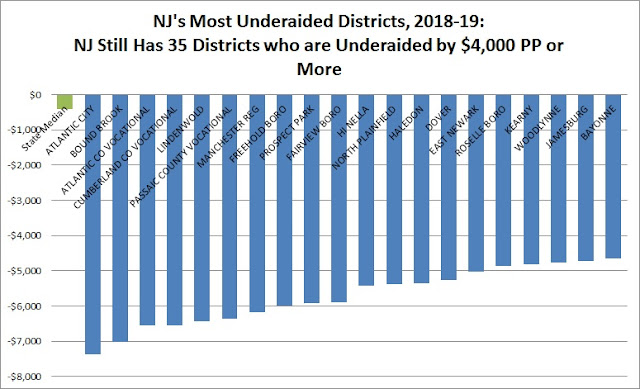 The reason that the deficit shrank by substantially less than the input of new+redistributed aid is because the true deficit increases every year due to weighted enrollment growth, tax base erosion, and inflation.  (see below)

Sweeney's state aid proposed was designed to give the biggest increases to districts with the worst percentage underfunding with the goal of a 58% threshold, so there are only eight districts getting less than 50% of their Uncapped Aid.  Woodbridge is now the most underaided in percentage terms, getting only 42% of what it is supposed to get.


Steve Sweeney often said that he was bringing every district up to 58% of its Uncapped Aid, but this is not accurate, since Sweeney and his allies were forced to cap aid limits for large underaided districts such as Woodbridge and even some small districts who were exceptionally underaided, such as Fairview.  As you can see inm the table below, there are 16 districts who remain below 58%, with Woodbridge being the state's most underaided in percentage terms.


Overall, 117 districts are now exactly at the 58% threshold.

Although the need to cap aid increases for 2018-19 is disappointing, in 2019-20 and beyond, these districts will have the largest increases proportionally, since (if Murphy signs S2), new aid will be based on each district's deficit, not its existing aid.

The legislature's increase for 2018-19 was structured onto Phil Murphy's SFRA-literalist proposal, in which state aid was determined by inflating a district's existing aid by (usually) 5%, so districts already getting 80-90% of their Uncapped Aid got the largest gains.  Hence Trenton gained +$793 per pupil and Newark gained +$729 per pupil, even though those districts were only underaided by about $2800 per student, which not even close to NJ's largest deficits.

Under Murphy SFRA-literalist approach, 13 districts (all Abbotts) gained 48% of all new state aid.

Aid increases in dollars per student are available here.

Sweeney and his allies kept Phil Murphy's original distribution for all underaided districts, but then
strove to bring every district up to 58% of its Uncapped Aid.  Under this plan, Newark and Trenton didn't gain additional aid, but they didn't lose any state aid either.  Because of the focus on the 58% threshold, severely underaided districts who were at or above that level did not gain any additional state aid under the Sweeney plan.  EG, Belleville is underaided by $4252 pp, but it gained nothing over it had originally been supposed to get under Murphy's plan because Belleville was already at 60% of its Uncapped Aid and the Sweeney team used percentage underaiding.
In any case, these districts are the ones who are gaining the most in dollars-per-student.

What is also important to note is that the majority of NJ's severely underaided districts gained more state aid in the Sweeney model than the Murphy-Repollet SFRA-literalist model, although not always. 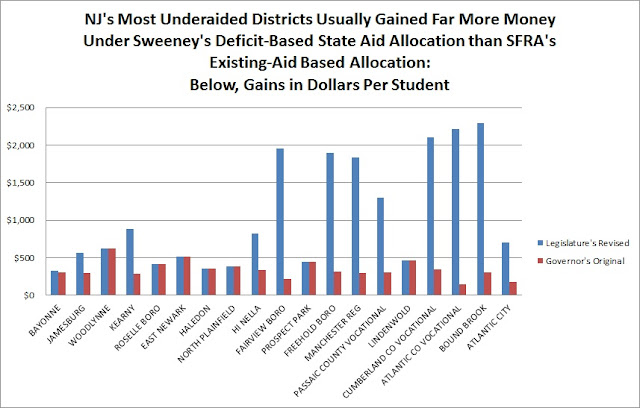 The reduction of Adjustment Aid was done through a more complex method that sometimes depended on spending relative to Adequacy and municipal overburden. Vo-techs were also exempted from any cuts.

The following districts lost the most:


Although the media focused on Jersey City being the "biggest loser" for losing $3.5 million and that being the most in total dollars, that loss is only $114 per student.

Sweeney's Plan is Good Policy, But It Won't Bring Every District to 100% of State Aid

Toms River, Brick, Freehold Regional, Manalapan-Englishtown, Jersey City, and Ocean City have been at the forefront of opposition to state aid reform, saying that it would "decimate" their districts if they receive only 100% of their state aid.


Although Adjustment Aid will probably grow over the next seven years, not all of that $651,944,818 in 2018-19's Adjustment Aid will be available to be redistributed because several tens of millions of it goes to districts who are being protected from aid cuts by the carve-outs for being below Adequacy, having "municipal overburden," or being vo-techs.

I do not have the exact amount of "protected Adjustment Aid," but East Orange alone has $24.4 in excess aid, Keansburg has $7.6 million, Vineland has $5.4 million, Gloucester City has $1.2 million. Monmouth County Vo-Tech has $6 million in excess aid, Ocean County Vo-Tech has $4.3 million. Between those districts and other protected districts, there is probably $50 million in "protected Adjustment Aid."

On the other hand, unless there is a recession, the State of New Jersey will experience annual revenue growth, but the amount of money left over for K-12 aid after expenses for TPAF (+$392.5 mil for FY19) and post-retirement medical (+$51.8 mil) will not equal the $284 million it was for 2018-19 since the 2018-19 budget was powered by increasing income tax rates, the transfer of the state lottery, fiscal gimmicks, flat-funding Extraordinary Aid, flat-funding municipal aid, plus stronger income tax revenue growth.

There are two factors in NJ's budgetary favor.
Reaching 100% of state aid for all districts will also depend on what decisions the governor and legislature make regarding other expenses that are paid out of the Property Tax Relief Fund, ie, municipal aid, direct property tax rebates, community college, and PreK.

Given the state's extreme budget pressures for debt streams like TPAF and post-retirement medical, plus the appropriateness of funding municipal aid and direct tax rebates, and the likelihood of increases for PreK, the need to redistribute Adjustment Aid will become no less acute in the future.


Posted by StateAidGuy at 7:40 PM No comments: