The Skews of Interdistrict Choice

Interdistrict Choice is the most underexamined and overpraised program in New Jersey education.

Since low-wealth Choice districts have Lower Local Fair shares, they are supposed to get regular formula aid for Choice students, ie Equalization Aid, Sped Aid etc.  However, in the era of frozen state aid they are not receiving their formula aid equivalents.

A Choice district can use its Choice money for anything it wants.  Some districts, like Englewood, have created innovative and unique programming.  Other districts have used the money to offset tax increases, like Brooklawn, which has not raised taxes since 2001.

I've addressed some of the significant defects of Interdistrict Choice before, such as its academic skimming and how the Choice payment per student is much greater than the marginal costs of taking new students in.

Rather than go over that ground again, this blog post will examine the regional, population size, and district wealth skews of Interdistrict Choice.

The swapping of students can generate significant sums of new state aid for districts that have no net increase in student enrollment.  For instance, Cape May districts have gained $7 million in state aid since 2011 but their total student population has fallen by 350.

Most of NJ's suburban counties, Bergen, Essex, Middlesex, Somerset, and Union have no or few participating districts.  The districts in these counties would like to participate and trigger additional state aid, but their own residential enrollments tend to be too high to allow it.

Schools Superintendent Frank Alvarez said the recently enacted Interdistrict Public School Choice Program might make sense for other districts with lots of unused classroom capacity, but it may not be beneficial option for Montclair.

"I don't think we would opt to participate in the program," Alvarez told The Times Monday night following the Board of Education's public meeting.


"The issue for us is limited school space, even with the new Bullock School," Alvarez explained. ""We don't have excess capacity, and the capacity we do have can be utilized better by bringing our district's special needs students back to Montclair."

Camden is a suburban county and appears to be an exception to this rule, but Camden has a large number of districts (38) relative to its population and a rural section as well.   These small districts are the Camden districts that usually participate.

This rural/Shore bias is only a skew, I acknowledge that there are many exceptions.

There are 128 Choice districts that get $52 million in Choice money, but these districts only educate 155,000 students.

The average Choice district only has 1,200 students (that counts non-residential Choice students)

There are 416 districts that do not/cannot participate in Interdistrict Choice. (not counting vo-techs and non-operating districts) The non-participating districts educate 1.2 million students.

The average non-participating district has 2,800 students. 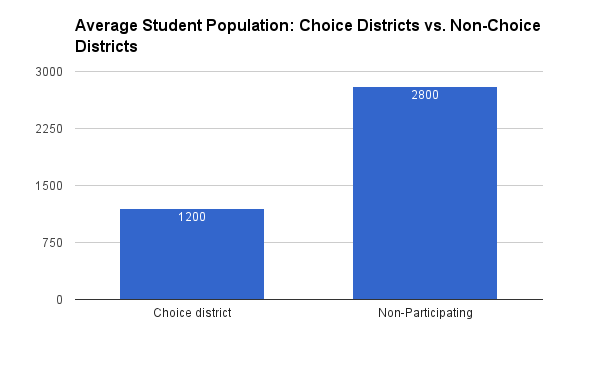 
In an era when NJ is supposed to favor district consolidation Interdistrict Choice is an obstacle to consolidation since districts get money whenever a student crosses a district line.  If small districts were to merge with their neighbors they could no longer qualify for Choice money from students who live outside of their town.

If NJ is serious about promoting district consolidation, something regarding Interdistrict Choice must be changed.

The 128 Choice districts receive a grand total of $52 million, but half of that money goes to only fifteen districts!!!


Ten of the "Big Fifteen" Choice districts are above average or significantly above average in district wealth per student.  Of these ten, three are ultra-high resource: Hoboken, Ocean City, and Deal.    These three districts, all of whom are richer on a per pupil basis than Millburn and Princeton, pull in a combined $7.1 million, over 13% of the total.  Other Choice districts in the Big Fifteen, such as Englewood, Morris Hills, South Hunterdon, and Central Regional are also significantly above average.

The situation in Deal is ridiculous. Deal, which has $2 billion in valuation for fewer than 200 students, gets almost $12,000 in state aid per student for 2015-16, of which over $10,000 per student is from Interdistrict Choice. Interdistrict Choice thus makes Deal better aided than Freehold Boro, Red Bank Boro, and most of the Monmouth County Abbotts. Due to Choice Aid, Deal's school tax rate is only 0.0920, meaning someone with a $1 million property only pays $920 a year in school taxes. 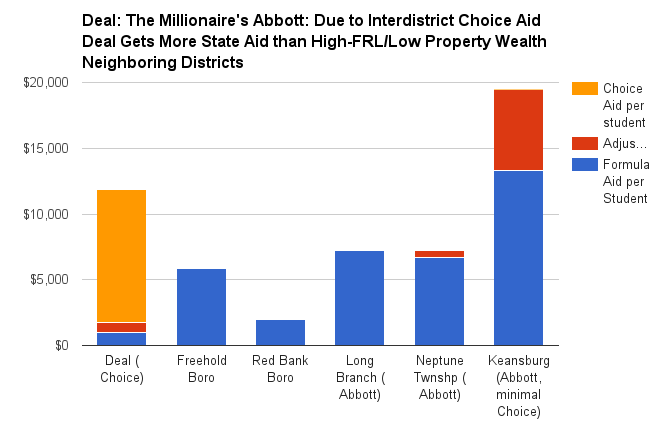 There is also the problem that the Christie Administration and legislature are giving Choice districts the same amount of state aid even as their Choice student populations decline, with the lost Choice Aid being rechannelled through "Additional Adjustment Aid."  This is money for non-existent students and is one of the most unfair aspects of NJ's aid distribution.

Anecdotally Interdistrict Choice students are good students and better off economically than most of the other students in their residential districts.  Unfortunately no comprehensive study of the demographics and academic profiles of Choice students has been done.

Interdistrict Choice has the potential to allow students to find a learning environment that better suits their needs, but the program's costs need to be scaled back and capped in the era of the Pension Crisis.  Using Local Fair Share to calculate Choice Aid is a significant mistake because it makes Interdistrict Choice internally unfair to low-wealth Choice districts and results in fruther overaiding of high-wealth districts.

There are reforms to Interdistrict Choice I would like to see, but Interdistrict Choice also may be a program whose inherent flaws are too fatal.  In the era of the Pension Crisis, when NJ cannot increase funding for districts with growing residential enrollment, how can we divert desperately needed money to Choice districts that may not be undergoing a net increase in student population at all?

Posted by StateAidGuy at 7:35 AM