Equalized Valuation is essentially the market value of all taxable real estate in a town. It is determined annually by the county tax assessor and is based on real estate sales.

The source of this information is the Table of Equalized Values.  (It has been updated for FY 2016.)

I have put the data online. 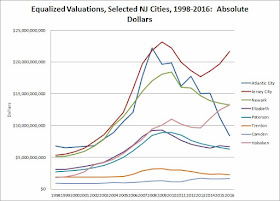 As a Percentage of Total State Equalized Valuation 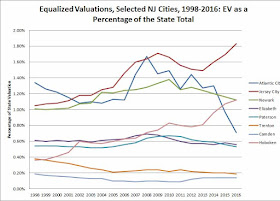 Based on property wealth relative to the rest of the state, Camden, Trenton, Newark, Elizabeth, and Paterson have continued to struggle.  Trenton dropped from having 0.38% of Equalized Valuation to only having .19%. Camden dropped from 0.14%. Camden was extremely low to begin with and didn't have far to fall, but it dropped from 0.18% to 0.14%.  Newark had a bad 2015 and lost over $200 million and is now tied with Hoboken for the fourth highest Equalized Valuation in New Jersey,  Paterson and Elizabeth also continue to lose valuation in absolute and relative terms.

I don't mean to disregard any progress made or differences between those cities, but over the last two decades these cities have lost ground relative to other big cities in New Jersey and the state as a whole.

Hudson County has really triumphed, especially in the "recovery" from the recession.

Jersey City and Newark were never really peers.  Their Equalized Valuations were approximately equal in 1998 but Jersey City's had 30,000 fewer residents.

Atlantic City, at the opposite extreme, has collapsed.  In 2008 its Equalized Valuation was $22.2 billion.  Now it is only $8.4 billion.  Atlantic City's mayor predicts its valuation will stabilize at $7 billion but no one really knows.

The fact that wealth changes is obvious to absolutely everyone in New Jersey except for Chris Christie, the legislature, and the education Establishment like the Education Law Center and New Jersey School Boards Association, all of whom have recently opposed redistribution of state aid away from any district, no matter how overaided and lightly-taxed. 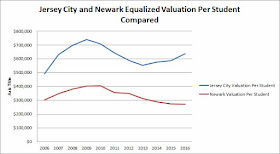 The frozen distribution of state aid is not sustainable.  There are forty districts in New Jersey that have aid deficits of at least $4,000 a student and 40,000 poor children in New Jersey who have no access to Pre-K.

At some point I pray that it penetrates the Establishment that redistribution is necessary.