As part of its advocacy for the New Jersey Education Association, the New Jersey Policy Perspective has put its imprimatur on several reports arguing that New Jersey's teacher pensions are "modest" and that the pension reform proposals supported by Steve Sweeney, Chris Christie, and other politicians are inappropriate because NJ's teacher pensions are already among the "least-generous" in the United States.
The NJPP's reports are highly misleading because pensions are just one part of an big enchilada of benefits and privileges that NJ retired teachers get.
Additionally, the NJPP exaggerates the monetary value of COLAs in other states, where often COLAs are significantly less than inflation.
The NJPP pension reports came out in 2014 ("New Jersey has Modest Public Pension Benefits") and 2017, ("New Jersey Pensions Rank Among the Least Generous in the Nation") and have overlapping data and arguments.  They were written by Stephen Herzenberg, who is not a full-time NJPP staffer, but an activist who normally concentrates on Pennsylvania.  As usual with NJPP authors, Herzenberg did not acknowledge in his reports that the NJPP is funded by the New Jersey Education Association. 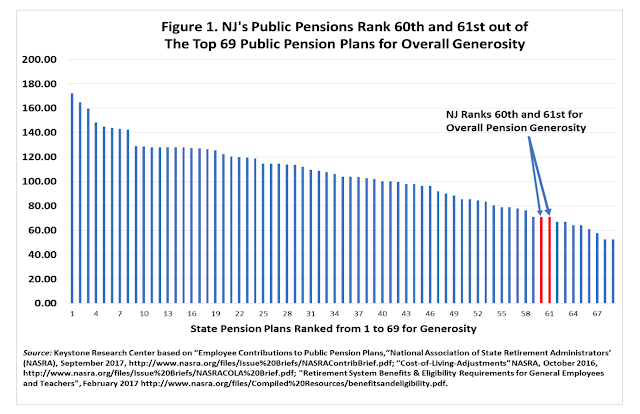 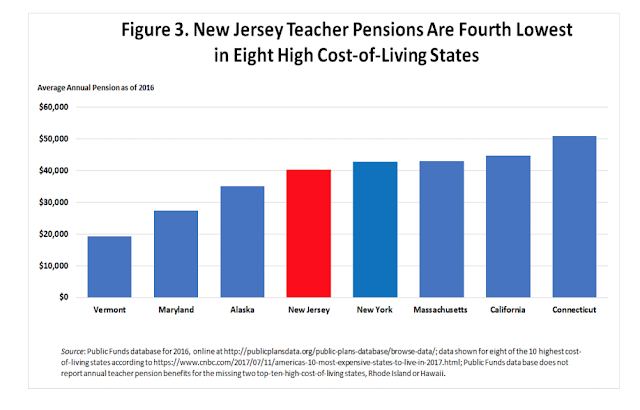 Mark Weber (aka Jersey Jazzman) also uncritically cited the reports in his 2019 and 2020 reports claiming that NJ's teachers were underpaid. 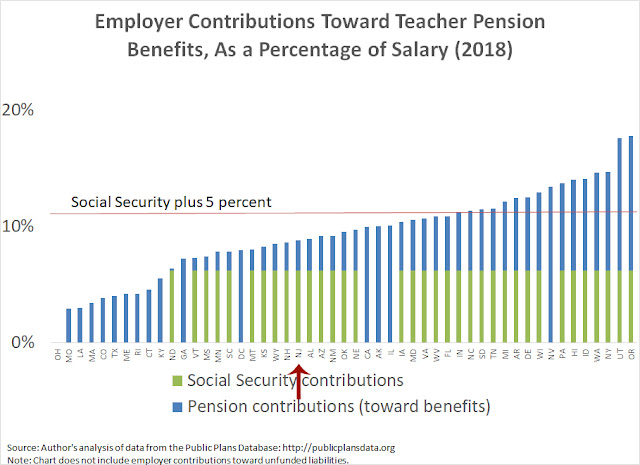 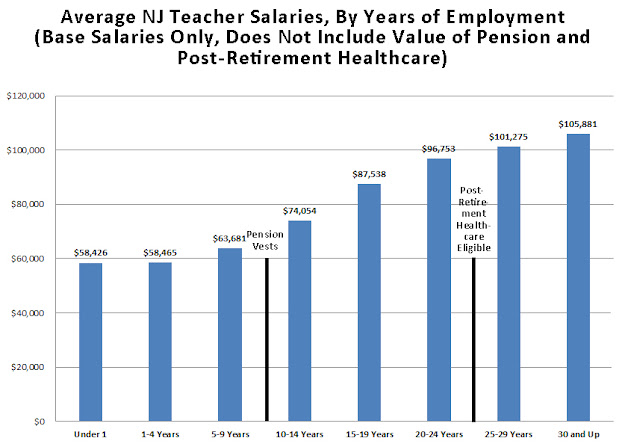 The NJPP/Herzenberg also left Post-Retirement Healthcare out of their reports, even though $1 billion annual expense made by the state for retired teachers.
Comparing post-retirement healthcare across states is complex and Chapter 78 changed NJ's system to be somewhat less generous to more recent retirees.  Data on post-retirement healthcare generosity is difficult to find and compare, but New Jersey's benefits appear to be more generous than in most other states for individual retirees.
A 2016 Pew Report "How States Provide Health Benefits to Retired Workers" sheds light on this elusive subject. Idaho does not offer any coverage.  In eleven states all that retired teachers can do is buy into the insurance pool, without any state subsidy.  In most other states, the state's subsidy is capped at a certain dollar amount or at a certain percentage.  NJ's coverage before Chapter 78 was 100% of costs. 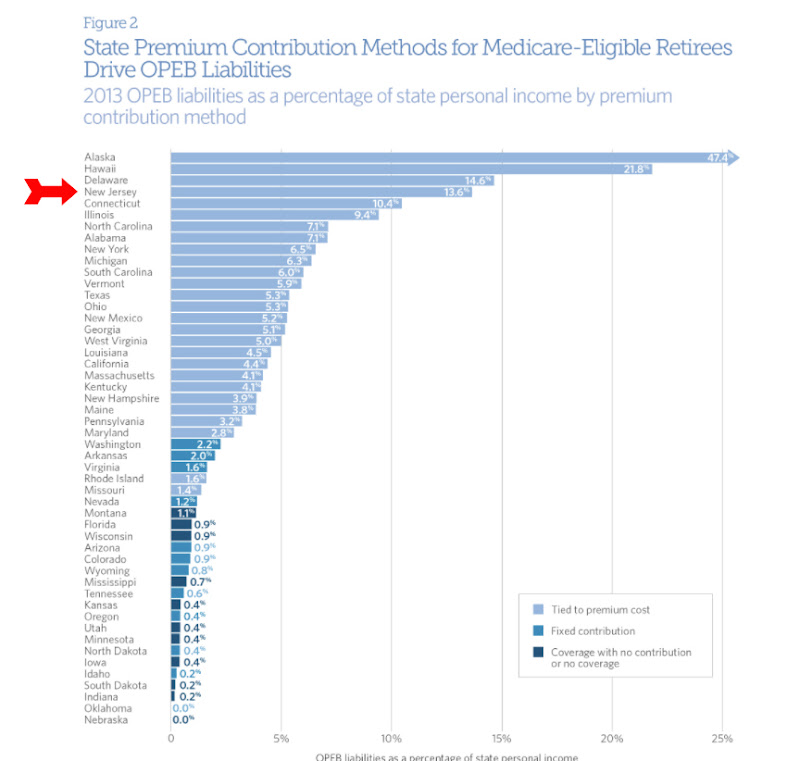 Additionally, taxes have to be factored in, since some states claw back some of their pensions in the form of income taxes.

Since 2016's Transportation Trust Fund deal, NJ's pension income has been tax-free: up to $100,000 for married couples, $75,000 for individuals, and $50,000 for married couples filing separately.  NJ's exemption thresholds are high enough to exempt nearly all teacher pensions in New Jersey.  In most other states pension income is either fully taxable or the exemption threshold is much lower than what it is in New Jersey.


The state income taxes that retirees would pay aren't as large as post-retirement healthcare and Social Security, but they aren't trivial either.  For a New York retiree with a $50,000 annual pension, state income taxes are $1,079, even after the $20,000 exemption.  The $1,079 is 1.3% of the average teacher's salary.
In California a retiree with a $50,000 annual pension, state income taxes are $1,563, which is 1.8% of the average teacher's salary.
In New Jersey, a retiree with a $50,000 annual pension would pay $0 in state income taxes on that pension.
In New Jersey, "Taxpayers who did not claim the maximum pension exclusion amount because pension income was less than the maximum exclusion amount for the taxpayer's filing status may use the unclaimed portion of the pension exclusion to exclude other types of income."
Not All COLAs Are Equal
Herzenberg and the NJPP are correct that the lack of a COLA in New Jersey is something that diminishes the value of a New Jersey pension over time, but they lump all states offering COLAs together, even though, COLAs vary considerably from state to state.  In many states the COLA is just a partial protection against inflation.
At  an extreme of generosity is Illinois, where public workers have a minimum 3% compounding COLA based on the full pension of a retiree, but other states, the COLA is based on a small fraction of the pension and/or don't make the full inflationary increase.
Herzenberg does qualify his championing of other states' COLAs by saying "69 of the 100 largest plans offer retirees some inflation protection" [my emphasis], but he does not say that for many COLA is not fully equal to inflation.
For instance, New York State's COLA "is applied only to the first $18,000 of the retirement benefit. The COLA percentage is calculated by taking 50% of the Consumer Price Index (CPI) increase from one March to the next and rounding up to the nearest tenth."  For the most recent year, New York State's COLA on someone getting a pension over $18,000 was only $180, annual.
In Massachusetts, the COLA only applies to the first $13,000 of the pension, although it is the full CPI.  For the FY2020 budget, the COLA was a maximum of $390.
In California, the COLA is 2%, but it is not compounded, so it is +2% of a retiree's initial pension.  Also, the legislature and governor have the power to cancel the COLA if they decide fiscal conditions require it.
California's ad hoc COLA is not unusual.  In many states the COLA is granted by the legislature or pension board and can be suspended.
Conclusion

It's bad enough that the NJPP/Herzenberg produce highly misleading research and that teachers like Mark Weber and Brian Rock uncritically parrot it, but so do some sources that purport to be more objective.

Posted by StateAidGuy at 6:29 PM