New Jersey's Equalized Valuations are out for Tax Year 2020, thereby allowing us to make an informed guess about FY2021 state aid deficits and surpluses, plus infer some key trends about New Jersey's economic churn.

In case you are new to this blog, "Equalized Valuation" the value of all the taxable property in a town.  It is used to apportion county taxes and, theoretically, K-12 school aid.

However, that gain was concentrated in a relatively small number of towns (20 towns had half the statewide gain), and the median town's Equalized Valuation increase was only 2.18%.

Continuing a trend of recent years, Hudson County had, by far, the biggest gain in Equalized Valuation. 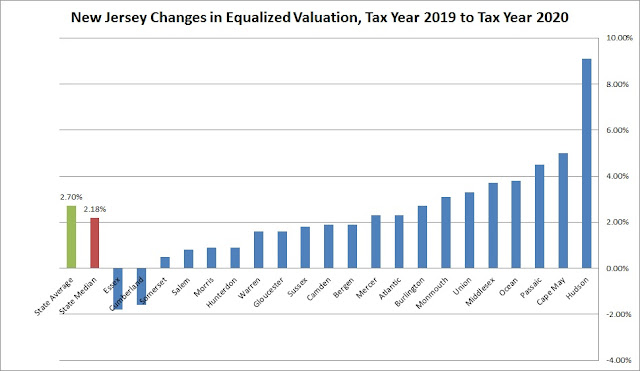 Much of that gain is Jersey City's alone.  Jersey City's $6.1 billion gain in Equalized Valuation is 17% of the state total gain.

Because you shouldn't infer anything based on one year's worth of data, here's the five year look, with the counties listed in the same order as the one-year look above. 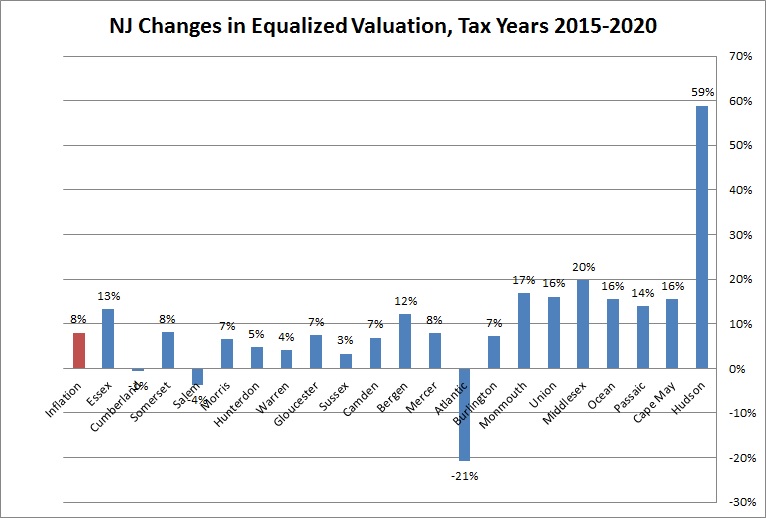 As you can see, for most of New Jersey, real estate is a poor investment, lagging inflation or barely beating it.   Much of the gain that does occur is from new construction too, not appreciation of the existing housing stock.

Gentrification, Where are you?

One of many erroneously reported trends in American life today is gentrification, which is often used as a synonym for the displacement of low-income residents.

Yes, gentrification and displacement are real and worthy of attention, but it's a geographically concentrated phenomenon and most American post-industrial cities aren't touched by it.

Aside from Jersey City, most of New Jersey's other post industrial cities, including Newark, Paterson, Elizabeth, and Trenton, have very little gentrification to speak of. 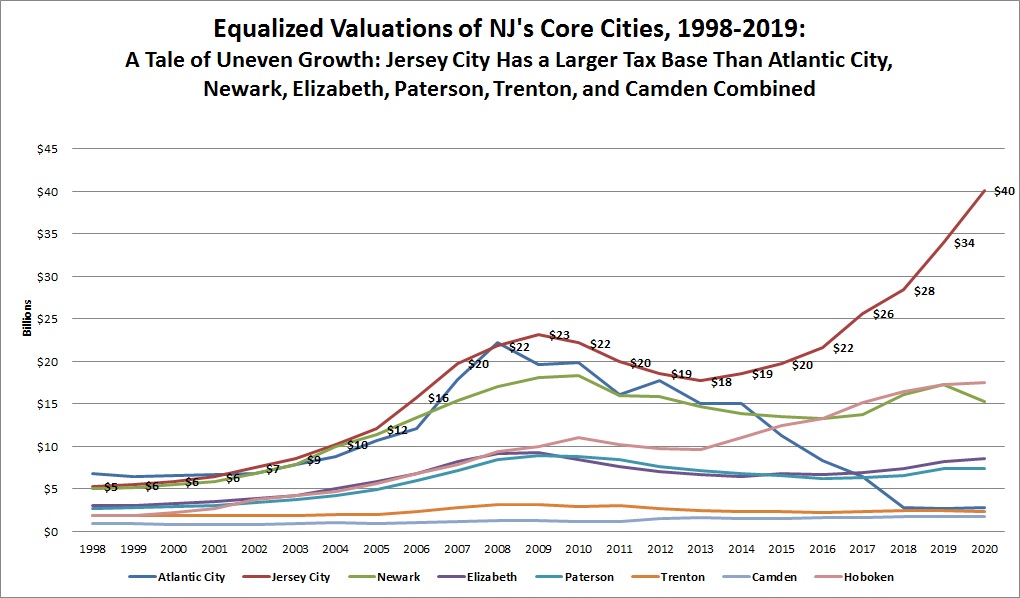 Equalized Valuation, along with Aggregate Income, is used to determine a district's Local Fair Share and thus its eligibility for Equalization Aid.

The formula for Local Fair Share is tweaked annually, but this is the 2019-20 version:

That $44 million increase from the growth of the Equalized Valuation, with tens of millions in increase from Aggregate Income growth too, should be enough to increase Jersey City's Local Fair Share to approximately $550 million for the first time.

The short-term importance of this is that Jersey City should lose much more state aid for 2020-21 than the $27 million it lost for 2019-20. The $60-70 million increase in Jersey City's Local Fair Share, combined with the increased pace of Adjustment Aid redistribution laid out in S2 (23% for 2020-21 versus only 13% for 2019-20), means a bigger loss for 2020-21 and the necessity of the Jersey City Board of Education to get real about raising its tax levy. The longer-term importance is that since Jersey City's K-12 enrollment is very steady and its Adequacy Budget grows due to inflation only, in only 3-4 years, Jersey City's Local Fair Share will exceed its Adequacy Budget ($623 million for 2019-20) and Jersey City will join "wealthy" suburban districts as ineligible for Equalization Aid. 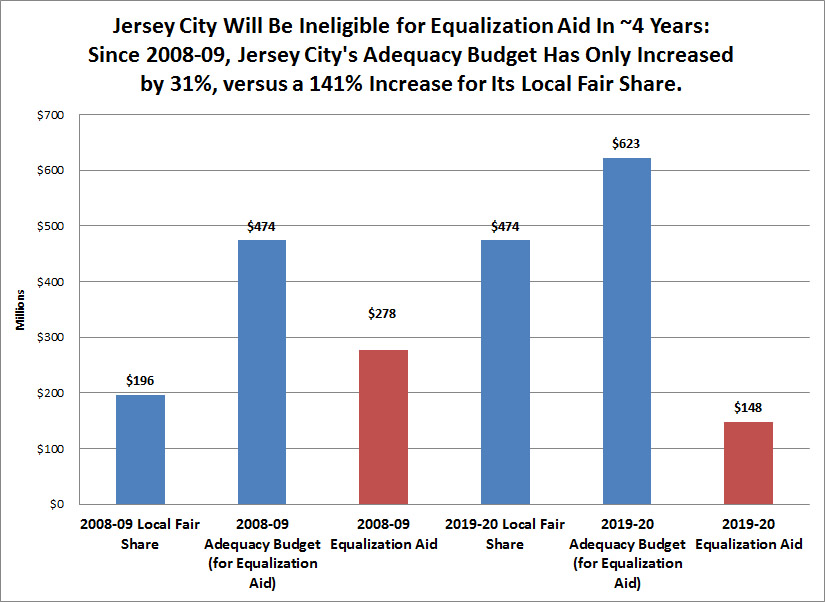 Other Hudson County towns like Bayonne, West New York, Union City, and Guttenberg also had large gains in Equalized Valuation, although there are nowhere near being overaided, let alone ineligible for Equalization Aid.

Other Districts to Note:

Contrary to assertions from Sen. Mike Doherty and the Toms River Board of Education, Jersey City's decades-long refusal to do a reval did not distort its state aid since JC's Equalized Valuation constantly grew along with its real estate market.  Jersey City's state aid was distorted by Adjustment Aid and PILOTing, not the lack of a reval.

Note: Equalized Valuation is not the same thing as the aggregate assessed value, which is the sum of all the individual assessments on properties and will not reflect real market value if the reval was not done recently.  Assessed values are only used for a town's internal tax apportionment.


Posted by StateAidGuy at 11:19 AM No comments:

This is Part 2 of my series on the problems that arise from how the School Funding Reform Act uses a district's Aggregate Income to calculate Local Fair Share.

Part 2 will look at how having a high expected Local Fair Share correlates with having high municipal taxes.

The core formula of SFRA is the formula for Equalization Aid, which is

So that if a district is incapable of raising enough money locally, the state steps in with "Equalization Aid" to, theoretically, create budgetary parity with middle-class districts.


Statewide, Local Fair Share ranges from a low of 0.73% for some districts at the Jersey Shore whose income is minute compared to their property bases, up to 2.1% for Lindenwold.

Since a district's Local Fair Share depends partly on its Aggregate Income, the following categories of districts are disadvantaged:

Although making people with less expensive  housing pay more in taxes could be defended since (all else being equal), they have more discretionary income, but Local Fair Share is based on Aggregate Income, not median income, so it therefore harms districts that are heavily non-vacation home residential,  since residential property has income attached to it.

Of the 60 districts in New Jersey that have the Local Fair Shares above 1.7%, 58 have higher-than-average municipal+county taxes too.

The same skew continues for all the above-median Local Fair Share districts.

For Salem County and Cumberland counties, "municipal overburden" is a misnomer, since their municipal taxes are quite low, but their county taxes are over 1% and so quite high.

The necessity of my including county taxes dulls the effect of municipal tax overburden since county taxes are distributed so broadly.


The reality that high Local Fair Shares and high municipal taxes means that for scores of New Jersey school districts reaching Adequacy is difficult or impossible, since they suffer from Municipal Overburden.

Why Do High Local Fair Share Distrcts Have High Non-School Taxes Too?

I cannot say exactly why some districts have high Local Fair Shares, but there is a correlation between a high Local Fair Share and lacking non-residential property and/or having apartment buildings represent a large share of the tax base.  (See "Property Value Classifications")

New Jersey's school funding law must be complex to try to accommodate the many different kinds of school districts that exist here.  Simplicity itself should not itself be a goal if the complexity serves a useful purpose.

In conclusion, since Boards of Education only have the power to tax property, Local Fair Share should just be based on a district's taxable property. Period.

Posted by StateAidGuy at 4:36 AM No comments: