David Sciarra of the Education Law Center has renewed his crusade to get the State of New Jersey to "promptly" borrow billions in order to pay for 100% of the costs of construction projects in the Abbott districts.

All $2.9 billion in bond financing for school construction projects approved by the New Jersey Legislature in 2008 is now spent or committed, and lawmakers must promptly approve a new round of funding for urgently needed projects across the state.
Education Law Center Executive Director David Sciarra issued the call to action to replenish funds for school construction in testimony to the Legislature’s Joint Committee on the Public Schools on May 8.
The school construction program, which provides significant support to rebuild and upgrade New Jersey’s aging facilities infrastructure, was launched in 2002 to comply with rulings in the landmark Abbott v. Burke case ordering the state to fully finance needed improvements to dilapidated, overcrowded and unsafe school buildings in the state’s 31 urban districts, called “SDA districts.”
In establishing the Abbott school construction program, the Legislature included grants for projects in non-SDA districts – called “regular operating districts” (ROD) – and county vocational schools. The program is administered jointly by the NJ Department of Education (DOE), which reviews district-wide plans and project proposals, and the Schools Development Authority (SDA). The SDA issues bonds and finances projects and is also responsible for facilities construction in the SDA districts.
ELC’s testimony highlighted the following:


The funding for regular operating district grants and county vocational school facilities has been completely exhausted.


Although even Sciarra does not say how much money he wants New Jersey to borrow, if Sciarra's demand were to be heeded, it would increase New Jersey's already billion-dollar annual debt servicing costs and diminish K-12 operating aid and money for TPAF.

It's a little commented on fact, but New Jersey's debt servicing costs for SDA construction have grown from $15 million per year in FY2002 to a projected $1.067 billion for FY2019.

I cannot estimate the costs of the construction Sciarra wants, but school construction anywhere in NJ is very costly.

The cost of Phillipsburg's new high school was $127.5 million and the cost of some new elementary schools in Jersey City, Pemberton, and other Abbotts has been in the $50-$60 million range.  Thus, the new construction alone would cost in the high ten-figures, before one even considers repairs.

In the two previous rounds of construction bonding in 2000 and 2008, 30% of the total money was reserved for non-Abbotts and vo-techs. Were the legislature to give money to non-Abbotts again, the costs would be higher.


Aside from the caution NJ must exercise in taking on more debt when we are always ranked as the one of the country's most indebted states, what is troubling about Sciarra's demand is that the Abbott districts are not, as a class, NJ's poorest districts.

Under any appropriate construction financing law, low-income Abbotts would have the state pay for the large majority of construction costs, but is 100% state funding appropriate? Especially when the state aid targets for operating aid for the Abbott districts are so high?  Shouldn't all districts at least have some skin in the game?

And even if 23 of the 50 poorest districts in New Jersey are Abbotts, what about the 27 non-Abbotts in the lowest-tax base fifty?  Is it right that Freehold Boro should have to put up with extreme crowdedness for years to get permission to override its voters on local construction bonding, because they had no hope that the state would contribute?  (eventually the state agreed to contribute 85%)

And how is it appropriate to target precious state construction aid at the Abbotts when not all Abbotts have had enrollment growth?  Since 2009-10, Asbury Park, Keansburg, Neptune Twp, Burlington City, East Orange, Salem City, Pemberton Twp, Pleasantville, and Millville have lost residential enrollment.  Several other Abbotts, like Paterson, Jersey City, Newark, and Camden have lost enrollment in the traditional public school, with the growth in residential enrollment coming in the charter sector that does not benefit from SDA funding.

It is because of the shift of student to charter schools that brand-new, $54 million PS 26 in Jersey City opened at only half of its capacity in 2017.

Getting reform of Adjustment Aid has been difficult enough, but if we reformers are fortunate enough to win the battle over Adjustment Aid, we can set our sights on getting fairness in school construction aid too.

Posted by StateAidGuy at 6:54 PM No comments:

One persistent myth about New Jersey state aid is that SFRA was "fully funded" in 2008-09.

This myth contains the kernel of truth that SFRA was funded at Capped Aid that year, but it is essentially untrue because Capped Aid is not real full funding, and the deficit for 2008-09 against Uncapped Aid was $1.05 billion. 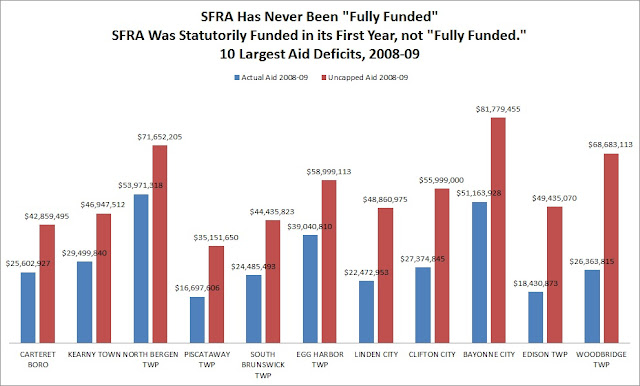 Here is the evidence:
The following are New Jersey's most underaided districtsfor 2017-18, with their deficits per student in 2008-09, and then the inflationary adjustment to September 2017 dollars.

Implicit to the myth that SFRA was fully funded under Jon Corzine is the myth Chris Christie was the first governor to underfund state aid.

The Education Law Center is the biggest culprit in spreading the myth that funding was fair and full before Christie, for instance, headlining a recent press release "Governor Murphy begins to fill the school funding hole left by his predecessor," (notice that 'predecessor' is in the singular) and then writing:

The [Murphy] proposed budget does not fully fund districts in the first year, a recognition of the extraordinary funding gaps created by former Governor Chris Christie’s combination of aid cuts and flat funding over the last eight years.


The bottom line: Governor Murphy’s budget begins to tackle the enormous deficits left by his predecessor [sic], putting New Jersey back on the road to fair funding for all schoolchildren.

Governor Murphy’s budget is a breath of fresh air after years of disinvestment in New Jersey students and schools."


The Education Law Center's faith in Phil Murphy is an opinion, but only the statement "Governor Murphy begins to fill the school funding hole left by his predecessorS" (plural!) would be factually accurate.


We Cannot Ignore the *Why* of Christie's Flat-Funding

It is true that Christie flat-funded K-12 operating aid, but K-12 operating aid is not the only money New Jersey spends on education, since the State of New Jersey pays teachers' FICA taxes, post-retirement health care, and (theoretically) the Teachers Pension and Annuity Fund.

If you factor in those three aid streams listed above, plus the TPAF portion of the Whitman-Era Pension Obligation Bonds, the School Construction debt service, plus other aid streams that are not debt-related, Christie actually increased education spending by $2.9 billion, which exceeds inflation and the growth of the rest of NJ's budget.

Were Christie able to put just two thirds of that $2.9 billion increase for non-operating aid into operating aid, all districts would be at least fully funded at Uncapped Aid, without the need to redistribute Adjustment Aid. 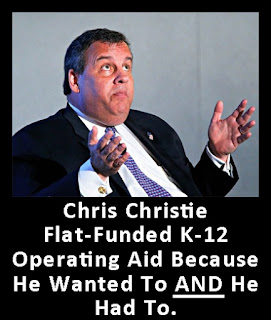 Spending on the four major debt streams --TPAF, post-retirement medical, POBs, and school construction debt service -- increased by $3.1 billion from Corzine's last budget (2009-10) to Christie's last budget (2017-18).  Granted, Corzine had to reduce the FY2010 TPAF payment because of the start of the Great Recession, but if you went back one year to FY2009, the TPAF payment was only $693.3 million, so no matter what year you start your evaluation from, it's the same basic story of large increases for education spending but not K-12 operating aid.

If in 2010 Christie had renewed the Corzine-era income taxes on high-earners he could have kept a few hundred million more in K-12 operating aid, but most districts would not have been anywhere near full-funding and fiscal conditions would have still tightened towards the end of the second term as increased debt payments devoured more and more of New Jersey's revenue.

If Christie had renewed Corzine's "Millionaire's Taxes," it's likely that not all of that money would have gone into K-12 operating aid either, since pensions and property-tax rebates would have had strong claims on that money.

Had Christie also not signed Chapter 78 and fought off Burgos v. New Jersey (over the pace of the pensions rampup) and Berg v. Christie (over the constitutionality of suspending COLAs), it's likely that K-12 operating aid would have been cut again.

So it seems like the "woulda coulda" hypothetical comparison between Christie and a hypothetical second-term for Corzine is a wash.  Personally I think Christie should have put even more into TPAF to forestall the depletion of the pension funds.

Anyway, Because spending on education-related debt streams must increase throughout the 2020s, it is not possible for Phil Murphy to fully fund education without redistribution, or, to be honest, even with redistribution.  Without redistributing Adjustment Aid, I do not think Murphy would even be able to reach Capped Aid in FY2022.

And back to my original point, SFRA was never fully funded.  CEIFA was increasingly underfunded.

New Jersey is never going to be able to appropriately fund every district without redistribution.


*  Atlantic City is the recipient of over $30 million in Commercial Valuation Stabilization Aid that is outside of SFRA and is not included in the data that the Department of Education lists publicly or sends to me.
Posted by StateAidGuy at 7:18 PM No comments: