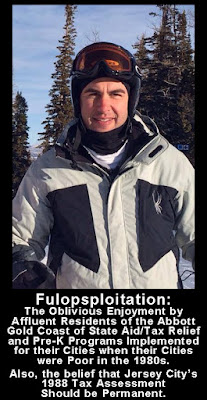 Steve Fulop has finally spoken on state aid and what he has said is complete bullshit, saying state aid redistribution is:

“clearly an attack on poorer, primarily African American, Latino and minority districts,” Fulop said, claiming that a change would shift funding into primarily white school districts in the suburbs.

"only takes into account the affluent waterfront section of the [Jersey City] and ignores primarily minority portions of the Jersey City that are significantly less well off."

Even if only 15% of Jersey City's residences are worth more than $1 million, they would comprise approximately half of the residential valuation, with other high-value properties filling in the great large majority.

On top of that, Jersey City has above average amounts of commercial and industrial property.   Whereas the average town in New Jersey is 84% residential in valuation, Jersey City is only 62% residential.  Although officially Jersey City's property is "only" 25.3% commercial, it has billions of dollars in off-the-books PILOTed property that is disproportionally commercial.  (see "Property Type Extremes")

If Jersey City had an up-to-date property valuation, Jersey City's low-income sections would pay a tiny portion of its school taxes.

Also, property values in many other parts of Jersey City are outperforming the state average.  Fulop's own $850,000 townhouse is in the Heights, not the waterfront anyway.

Fulop even says redistribution is wrong because it would hurt "minority districts":

“It is clearly an attack on poorer, primarily African American, Latino and minority districts,” Fulop said, claiming that a change would shift funding into primarily white school districts in the suburbs.


Fulop also said redistribution would help the suburbs "at the expense of the most needy children."  He warned that Newark would lose money, but that is a lie based on out-of-date information because Newark is now actually underaided by $90 million.


First of all, many of the districts who would lose state aid are heavily white rural towns and Jersey Shore districts.  Pemberton is New Jersey's second most overaided district, with a $25.8 million excess and it is majority white.

Second of all, the towns who would gain the most state aid are heavily Latino.  Dover is 82% Latino. Lakewood is 80% Latino.  Red Bank Boro is 77% Latino.  Fairview is 75% Latino.  Freehold Boro is 74% Latino.  All would gain millions if SFRA were fairly funded.

Even "money is everything" advocate Bruce Baker, when he took a break from his anti-charter school screeds, acknowledged that New Jersey's most underaided districts have very high Latino populations.

All of those districts are severely underaided and would gain, so this is no "attack" on primarily poorer, African-American, Latino, and minority districts."

Finally, any appeal to identity politics where Fulop bases his objection to the fact that Latinos and blacks in Jersey City might end up paying higher school taxes is staggeringly hypocritical of Fulop because Fulop himself spent years opposing a desperately-needed property tax reval and strenuously fought against a property tax reval which would have lightened the tax burden on Jersey City's Latino and black sections.  Jersey City's last tax reval was done in 1988, so Jersey City was literally a city "where poor blacks subsidized rich whites."

So, if anyone is looking at who is opposing state aid reform, as I have repeatedly said, the most powerful opponent is Steve Fulop.

If you are wondering why Vincent Prieto OPPOSES state aid redistribution despite representing the most severely underfunded legislative district in New Jersey, it's about his relationship with Steve Fulop.

"The Two Faces of Steve Fulop"

Posted by StateAidGuy at 5:23 PM