For the sixth year in a row, the disproportionate gainers in K-12 aid are districts that participate in Interdistrict Choice.

Interdistrict Choice, to simplify, is a relatively new program where state taxpayers pay school districts to accept students who live outside that school district.

The average state payment is nearly $11,000 per Choice student, an amount far in excess of the marginal costs to a district of accepting additional students.

After three years of blistering, unlimited cost growth (from $9 million in 2010 to $49 million in 2013-14), the Christie Administration tried to freeze Interdistrict Choice and only allowed limited growth.

For 2016-17 the Christie Administration is only increasing Interdistrict Choice spending by $1.2 million, but even that small amount is enough to provide disproportionate gains to Choice districts.

The following districts are all of the districts in New Jersey that are gaining more than $80 per student.  (NJ's median increase is $19 per student.)

Please notice how many are gaining most of their aid primarily through Interdistrict Choice.


(Some Choice districts who are among the biggest gainers in overall aid are seeing their Choice aid stay flat.  Atlantic City is in this category.  If a Choice district is gaining more from formula aid than Choice Aid it appears in blue as a regular district.)


Or, to put it in table format.

Please also notice that these big gainers are only rarely among the most underaided in New Jersey and seven of them in fact got more money than SFRA says they economically and demographically need!  (and remember, SFRA's funding targets are extremely high for any district where a majority of students are at-risk.)

Notice who isn't on the list: FREEHOLD BORO, New Jersey's most stricken and overcrowded district.  Freehold Boro is only gaining $100,770, or $58 per student.

Granted, some of the Interdistrict Choice districts are severely underaided too, including Manchester Regional, New Jersey's most underaided district for 2015-16.

Newark might be getting the most new money in absolute terms for 2016-17, but West Cape May is getting the biggest increase in dollars per student: an unbelievable gain of $1880 per student.  (over $100,000 for a district the DOE considers to have 65 students (See how Professional Community Development Aid is $650.  $650 = 65 students)

What is West Cape May that makes it so worthy?

When West Cape May has so much wealth and conditions in the rest of New Jersey are so desperate, the State should be trying to ease aid out of West Cape May, not funnel more into it.

Deal has a phenomenally high tax base: $17.2 million in Local Fair Share for 176 students (counting Choice students), or $97,800 per student.

Like Hoboken, Allenhurst, Alpine and a few other ultra-high resource districts, Deal has no need for any state aid.  Given its minute size, Deal should not even be an independent district.

Host District Support Aid is concentrated in Newark. Of the $26 million the state is distributing through this new aid stream, Newark is getting $22 million.

Plainfield, Irvington, New Brunswick, and Atlantic City are the only other districts in NJ to get over $100,000 through Host District Support Aid. Several districts with high charter transfers, such as Paterson ($34.6 mil in charter transfers), Trenton ($35 mil), Camden ($57 mil), Jersey City ($58 mil) are getting nothing.

Host District Support Aid is pass-through money for charters. The children in the traditional Newark Public Schools will not directly benefit from this money.  The creation of Host District Support aid is more a sign of Newark/charter political power than Chris Christie fairly and consistently responding to a school funding problem.

The increase in aid for the Newark Public Schools is $4.7 million, or $92 per student.

The real culprit of underaiding is New Jersey's stagnant economy and need to increase pension and debt payments, however, the problem isn't only the pitiful amount of new aid, it's how the new aid is distributed.

That $19 million was all there was available to help NJ's most acutely underaided districts.

For 2016-17, the 199 overaided districts got $567,773,913 more than SFRA said they demographically and economically needed.  If Chris Christie had been willing to redistribute only 10% of this money (~$57 million) and had not created the $10 per student Professional Development Aid (~$11 million) it would have made possible an increase of $68 million for Equalization Aid - more than three times more than was actually made available.

The Robbers and the Robbed: State Aid Disparities for 2016-17

Posted by StateAidGuy at 11:28 AM No comments:


Something else that must be said about next year's Pre-K distribution is that the Abbott Pre-K monopoly is continuing. 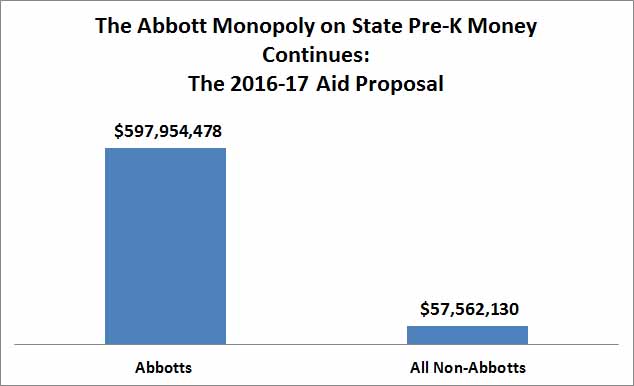 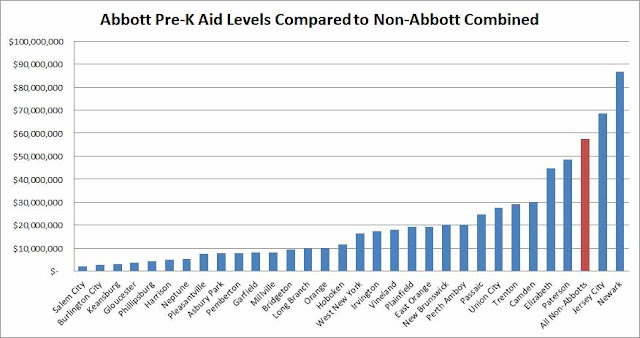 Due to increases in the number of children aged 3 or 4 in Pre-K districts, some of the aid shifts are very large.

As I've said before, due to the state's refusal to update the Abbott list, New Jersey has a growing issue with the fair and rational provision of Pre-K services to needy students.

The NJ Supreme Court has forced the state to pay for "free" Pre-K for all 3s and 4s living in the Abbotts (and only the Abbotts) since the Abbott V decision of 1998.

SFRA, as I've said repeatedly, is hopelessly unfundable, and the Abbott/Non-Abbott inequities are starker than ever.

Means-testing for Pre-K eligibility would save New Jersey tens of millions of dollars a year.  If Pre-K advocates like Steven Sweeney and Teresa Ruiz were serious about finding more money for Pre-K for poor children outside of the Abbotts then means testing in the Abbotts is necessary. 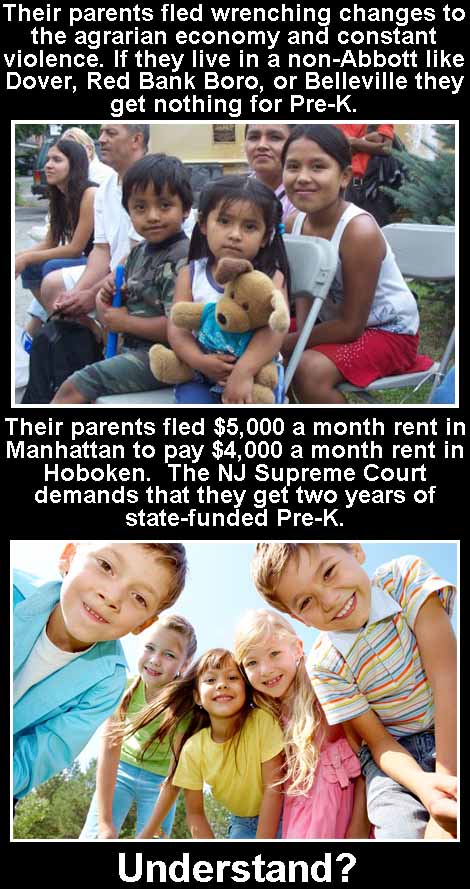