There is no program on the New Jersey education landscape as overpraised and underexamined as Interdistrict Choice.

Interdistrict Choice funding works by having state taxpayers assume 100% of the expenses for non-resident students to enroll in participating Choice districts. This amount is $10,500 on average in Choice Aid per student plus regular state aid and extra Transportation Aid for the sending district. The "Choice Aid" is equal to the receiving district's Local Fair Share, that is, roughly the amount that local taxpayers pay per child for their district's own resident children. Choice Aid varies by the wealth of the district. High-resource Choice districts that have high Local Fair Shares get as much as $15,000 in Choice Aid per Choice student. Lower-resource Choice districts that have low Local Fair Shares may get $3,000-$4,000 in Choice Aid per Choice student, but they get more in regular state aid for the same number of incoming students. However, since regular aid has been below-formula for the last few years, wealthier districts get more money than less wealthy ones.
Prior to 2010 Interdistrict Choice was limited to one-district per county but not every county had a participating district. In 2010 the legislature, nearly unanimously, eliminated that rule. Since 2010 the program has grown from only fifteen districts to 136 for 2014-15. With that increase in district and student participation the amount of education aid diverted into Interdistrict Choice has grown exponentially, despite the recession and stagnant aid for non-Choice districts. In 2010-11 Interdistrict Choice cost $9.8 million, in 2011-12 it was $20.6 million, in 2012-13 it was $33 million, and in 2013-14 it was $49 million (for 4,682 students). For 2014-15 the Christie Administration put a 5% enrollment growth cap in place for existing Choice districts and limited space in new ones, so total cost growth for the new year will be only 10%, to $54 million.
Choice money a district gets is completely independent of need and some of the biggest winners in Interdistrict Choice are the highest-resource districts in New Jersey. Deal, for instance, has an astronomically high $12 million in property valuation per student and gets over $11,500 in Choice Aid per student (both numbers used residential and Choice students for the denominators. Deal gets $1,000 per student in other aids as well.). Deal has six times the property wealth per student of Princeton and Millburn and yet it gets more state aid than Neptune Township and Long Branch, its Abbott neighbors, both of which get $7,000-$8,000 in aid per pupil.
Most Choice districts are middle-resource, but half of NJ's Choice Aid goes to only fifteen districts (2013-14 numbers): Upper Freehold, Mine Hill, Pittsgrove, Englewood, Hoboken, Ocean City, Kenilworth, Deal, Hammonton, Morris Hills, Middle Township, Clinton Township, Central Regional, Hoboken, and Manchester Regional. Of the districts that get the majority of Choice Aid all except Hammonton, Upper Freehold, and Pittsgrove have over $1 million in property valuation per student. Hoboken and the Shore districts have more than $2 million per student.
Nor are Choice districts, in any way, the neediest districts in terms of student population. Choice districts can be Choice districts because they have spare capacity, usually because of a shrinking student population. These districts, by definition, are not ones that have to grapple with residential student population growth and its attendant questions of how to pay more staff to educate more students, buy more computers, provide more classroom space etc. Although there are many fixed costs for a district with a dropping population, by definition, these districts don't have the most acute budget problems in New Jersey. Thus Interdistrict Choice is money for districts with the least pressing needs.
Students who participate in Interdistrict Choice tend to be ones who are less expensive to educate. According to a Rutgers study done when Interdistrict Choice was in the pilot phase, Choice students are half as likely as the general population to have learning disabilities and the Interdistrict Choice legislation even gives Choice districts permission to reject students with special needs.


A Windfall for Choice Districts 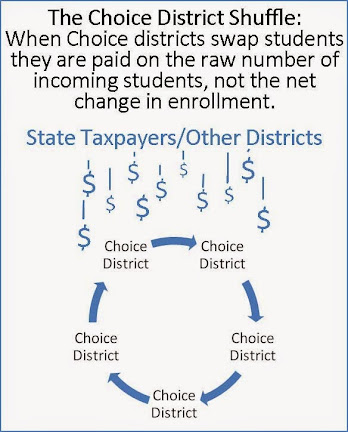 
This policy has absurd implications for the awarding of state aid. For instance, since 2010-11 Cape May County districts have had a net decrease of 350 students, but despite the population decrease Cape May County districts receive an additional $7 million in state aid ($5.6 million of which comes from Interdistrict Choice). Between 2012-13 and 2013-14 West Cape May had a net loss of 22 students (from 97 to 75) and had a $178,000 increase in state aid because a higher proportion of West Cape May students were Choice students. 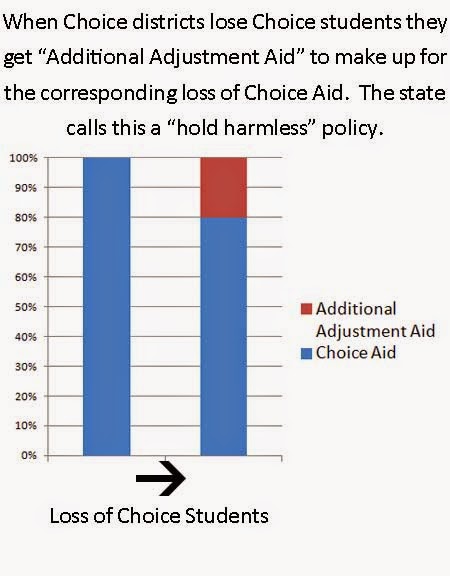 To be fair to Interdistrict Choice, since sending districts are supposed to lose regular state aid when they lose students to Interdistrict Choice, there are theoretical savings offsets for state taxpayers when children transfer out of a high-aid district into a low-aid one. If a child leaves Trenton (which gets almost $17,000 per student) and enrolls in Hopewell Valley (which gets $700 per student), the state would actually save $16,300 on regular state aid, an amount that is greater than the Choice Aid it would have to pay Hopewell Valley. The state would realize savings in the same way when children leave Asbury Park, Paterson etc.
However, the aid difference between sending and receiving districts is rarely as large as it is between Trenton and Hopewell Valley. When students transfer between districts that are at rough parity in per pupil aid, like in the Hunterdon County and Cape May County Choice district clusters, the costs to the state are extremely high.
The flip side of the state saving money through aid reductions is that if a high-aid district has many students who participate in Interdistrict Choice the sending district would have budget problems that are very similar to the problems districts have when students transfer to charter schools. The loss of state aid combined with the transportation subsidy most sending districts must give parents could potentially be very costly.
In any case, for 2014-15 and 2013-14 school years the Christie Administration has had a policy of not allowing any district to lose aid. This means there are no savings offsets for state taxpayers.


How the Windfalls Are Used

Choice Aid can be spent in any way a district wishes. It can be used to cut taxes, offset tax increases, offset budget cuts, or expand academic programming. The ways Choice districts use the money varies. Brooklawn, for instance, has not had a tax increase since 2001 and has let its per pupil funding become very low. At the other end is Englewood, which has used its Choice money to create the Academies@Englewood, a school-within-a-school with selective admissions and unique programming. Most Choice districts follow a middle path, using Choice money to offset tax increases and budget cuts, but not offering any special programming either.


The Context of Aid Unfairness

Choice Aid for New Jersey in 2014-15 is only $54 million. Even if you count Additional Adjustment Aid, extra transportation aid, and administrative costs, the program is still only a small portion of New Jersey’s overall $8 billion K-12 aid stream. Why protest?
My answer is that New Jersey’s distribution of K-12 aid is already so unfair and irrational that even the diversion of less than $60 million should be scrutinized.

The first unfairness is that there is a funding cliff between the Abbotts and low-resource non-Abbotts, where districts like Carteret and Belleville get one-quarter to one-third as much aid as Jersey City, Paterson, Elizabeth etc do, even though those districts need the money almost as badly. The Funding Cliff means that "Abbott Rim" districts have much lower spending and much higher taxes than the Abbotts that are nearly their economic peers.


In light of the unfairness in the distribution of state aid, is it wise to create and support a program that takes money from the general K-12 aid budget and funnels it into districts that have lost population and thus do not have the most acute needs?
Even if the Interdistrict Choice diversion is not as large a factor in causing districts to be underaided as the recession and the state pension crisis, Interdistrict Choice Aid stands out as one of the only factors within the control of the governor and legislature. For that reason the costs of Interdistrict Choice cannot be ignored as a factor in fixing New Jersey’s inadequate, irrational, and unfair distribution of aid.
In theory Interdistrict Choice is a good idea. Who would object to giving students more choice over their educations? But the funding formula pays receiving districts way beyond the marginal cost of additional students and exists against a backdrop of severe underaiding in the suburbs and on the “Abbott Rim.” The state’s funding priority should be money for SFRA and low-aid districts (which may have growing residential enrollments).

Posted by StateAidGuy at 8:58 AM No comments: